Lopetegui has lost the two biggest jobs in Spanish football in less than five months after his decision to join Madrid also cost him his role as national team manager at the World Cup. 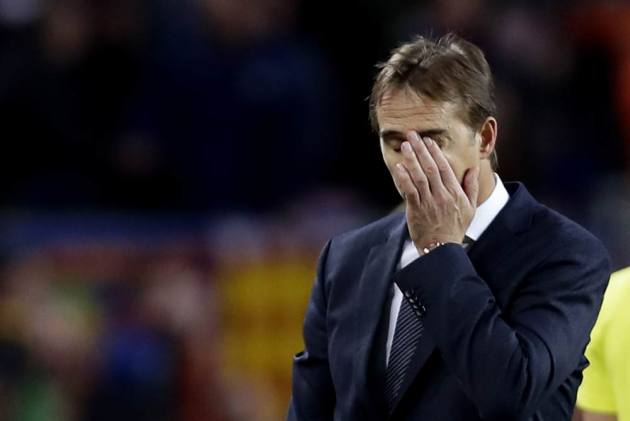 Julen Lopetegui's Real Madrid reign lasted just 139 days. The former goalkeeper was dismissed on Monday following a meeting of the board of directors, who concluded there had been a "great disproportion between the quality of the staff of Real Madrid...and the results obtained to date".

Lopetegui, 52, has lost the two biggest jobs in Spanish football in less than five months after his decision to join Madrid also cost him his role as national team manager at the World Cup. Spain subsequently failed in Russia under Fernando Hierro, their stand-in coach,  and now Lopetegui's failure at Madrid has been confirmed too.

Santiago Solari, the club's B team coach, has been put in temporary charge and is now expected to lead Real for their Copa del Rey game against minnows Melilla on Wednesday. The Argentinian could also remain in post for Saturday's La Liga match at home to Real Valladolid.

Lopetegui's last game proved a humiliation as Madrid were hammered 5-1 by rivals Barcelona in the Clasico on Sunday. The defeat was their fifth in seven games and, seemingly, convinced president Florentino Perez that change was required.

"This decision, adopted from the highest level of responsibility, aims to change the dynamics of the first team, when all the objectives of this season are still achievable," a club statement read on Monday.

"The Board of Directors understands that there is a great disproportion between the quality of the staff of Real Madrid, which has eight players nominated for the next Golden Ball, something unprecedented in the history of the club, and the results obtained to date."

Madrid's eagerness to emphasise the talent in their squad was noticeable and perhaps a reminder for potential successors, who may not be easy to find.

Antonio Conte is the early favourite but initial talks have not gone smoothly, according to reports in the Spanish press. Others linked with the post include Belgium coach Roberto Martinez and former Real Madrid midfielder, Guti.

Solari is the man in position, however, after two seasons with Castilla, in which he oversaw them finishing 11th and eighth in Segunda B.

Zinedine Zidane was always a hard act to follow given his three consecutive Champions League triumphs, not to mention the Frenchman's popularity in the dressing room.

But beneath the celebrations in May, cracks were already appearing. Madrid finished 17 points behind Barcelona in the league, Zidane departed and then Cristiano Ronaldo followed, taking an average of 50 goals per season with him.

Perez opted against signing a big-name replacement, which left Lopetegui short up front, while the problems in attack quickly spread to the defence, where Sergio Ramos and Raphael Varane have become increasingly erratic.

"It is not just Julen's fault", read the headline on the front page of Marca, Spain's biggest selling daily, on Monday.

Madrid's dreadful recent run showed no sign of abating at the Camp Nou, however. They have managed one win in their last seven matches, sit ninth in La Liga and earlier this month went more than eight hours without a goal.

Some now believe, perhaps Perez included, that the team needs a firmer hand. Conte is a demanding coach, meticulous in his tactical preparation and unrelenting when it comes to defensive organisation.

After Sunday's game, Ramos pointedly stated that managing the dressing room at Real is more important than technical knowledge.

"Those are the coaches with whom we've won titles. Managing the dressing room is more important than the knowledge of a coach."

The next coach will be tasked with closing a seven-point gap on Barcelona, who returned to the top of the La Liga table after their emphatic win last weekend.
Ramos insisted the title is not yet lost.

"There are people that would believe, others that wouldn't," Ramos said. "I have won La Liga from 10 points behind. The key to success is to work. Madrid never gives up when it can turn the situation around."