The 'probe' finally begins but the public mood is sceptical 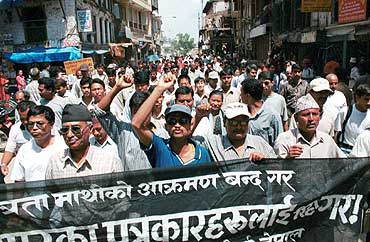 A high-level committee constituted by Nepal's new king Gyanendra to probe the June 1 palace massascre finally began its probe and it is expected to submit its report to the monarch after three days of investigations that would include inspecting the shooting site, interviewing survivors and conducting ballistic tests.

Headed by supreme court chief justice Kesbah Prasad Upadhyaya, the two-member panel, which include speaker of the lower house of parliament Taranath Rannbhat had earlier run into rough weather following the resignation of leader of the opposition Madhav Kumar Nepal questioning the constitutionality of the committee.

"We will inspect the venue of the shooting (in the palace), interview doctors, hostesses, survivors and record them, conduct ballistic and forensic tests with the help of experts," Ranabhat said.

The probe has begun amidst allegations levelled by two close relatives of the royal family that late crown prince Dipendra had shot and killed his father king Birendra, mother Queen Aishwarya and seven other royals at the Naryanhity palace last Friday night.

Asked if the panel's probe would be affected by the allegation made yesterday by Captain Rajiv Shahi, a close relative of the royals, accusing Dipendra of the palace massacre, Ranabhat said "we are not not concerned about anything anybody says.

"The committee is an authentic body to probe the royal massacre and we will individually interview all survivors and eyewitnesses," he said.

The Nepalese government today also criticised the eyewitnesses who have spoken to the media, saying they should have waited till the probe was over. Nepalese Foreign Minister Chakra Prasad Bastola said that eyewitnesses have jeopardised the investigation.

Dr Rajiv Shahi, who held a media briefing on Thursday, was taken in for questioning by the army. The charge? Holding a press conference without seeking its prior permission. Surprising, to say the least, since the venue of his briefing to the media was the military hospital in Kathmandu.

But the average Nepali remains sceptical about the outcome of the probe as it is being perceived as too little, too late.