In Uttar Pradesh's Gorakhpur, the Congress leader asked the crowd, “Have you seen the ‘Sholay’ movie and Asrani’s role in it? He used to always say `Angrezon ke zamane mein’ (in the time of the British).” 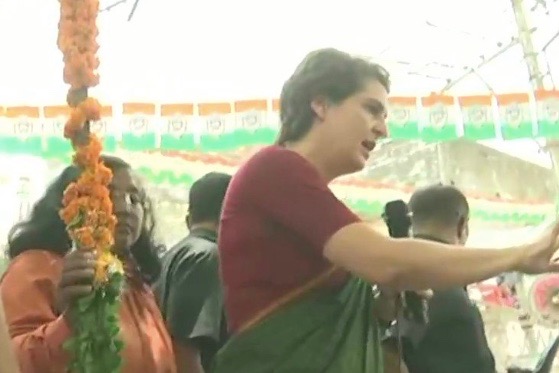 In Uttar Pradesh's Gorakhpur,  the Congress leader asked the crowd, “Have you seen the ‘Sholay’ movie and Asrani’s role in it? He used to always say `Angrezon ke zamane mein’ (in the time of the British).”

“And in the same way Modi ji talks about Jawaharlal’s work, Indira Gandhi’s work and Rajiv Gandhi’s work. Why doesn’t he talk about his work in the last five years?” she asked the crowd.

Priyanka Gandhi had termed Narendra Modi as an "actor" and said Amitabh Bachchan would have been a better choice for the prime minister’s post.

In Mirzapur she said: "The aim of the BJP is to grab power. Modi has been unable to fulfil the promises made during the last general election.”

“The Congress on the contrary does not make false promises, but works in the interests of the farmers, the poor and the youngsters," she added.

At both events, she referred to the stray cattle menace in Uttar Pradesh.

"When stray animals come and destroy your crops, do the `chowkidars’ turn up? They do not come. They had claimed that demonetisation will bring back black money. Has black money come back? Nothing has come to the country except troubles,” she said.

“What kind of government is that which neither listens to the farmers, nor saves your farms from stray animals?” she said.

She also claimed that there has been a loss of jobs during the Bharatiya Janata Party’s term, and accused the Modi government of weakening MGNREGA, the rural employment guarantee scheme launched by the previous Congress-led government.

She halted her Mirzapur address during the 'azaan', resuming it after the call for prayers was over.

"The prime minister has been unable to present his account on development work done for the farmers, labourers and youngsters in the last five years,” she said.