They could not kick on from 150 for one in 20-odd overs. The rest was the offshoot of this malady. 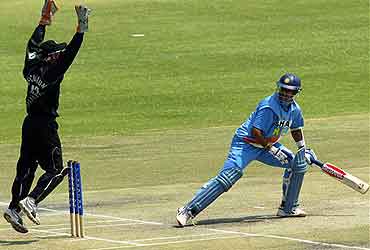 When we walked to the park on the morning of the tri-series final, we felt the Indians would prefer chasing. On our part too, we wanted to bowl first. But when Stephen Fleming had a look at the pitch he felt it was dry and it would not have been a bad idea to bat first since it could only get worse during the day.

So India probably did the right thing and after a good start, they should have got to 320. But they lost the plot, our batters got on top of their bowlers and with those missed catches, it was only one way this final was going to end.

If I have to choose where India missed the trick, it has to concern their batting where they could not kick on from 150 for one in 20-odd overs. The rest was the offshoot of this malady.

It was one of those sub-continent type of wicket where there was little bounce, little pace and little by way of movement to the fast bowlers. It was the same for us as it was for the Indian seamers.

I was disappointed with my first spell only to the extent that I lapsed a couple of times in concentration and gave Virender Sehwag that width which he latched on to for off-side boundaries. It hurt and I felt I have let myself and my team down.

But overall, I was pleased with my first spell as I gave little by way of runs and could have had Saurav Ganguly more than once.

Sehwag was a sight to behold. I remember Jacob Oram telling me that he felt he was bowling on to the stumps but Sehwag was still backing away and creating that room to cream boundaries on the offside. His dismissal had a withering effect and before everyone goes up in arms and term it a soft dismissal, I feel he is not the sort of player who deserves such an analysis. He is a dangerous player whose all-out methods could look good or bad depending on the way it ends up. With him, you have to take the good with the bad.

Once Sehwag went, we clawed our way back. Daniel Vettori was always going to be a very handy bloke on that sort of a wicket. He cost us only 35 runs which was worth its weight in gold. Kyle Mills also earned our praise for the manner in which he recovered from a poor start and chipped in with wickets.

Frankly, I was surprised to be named man of the series for I wasn't expecting it. I did go past the bat often on the day and could have had more than one wicket in my last column.

But I could do only as much: some days you bowl rubbish and have guys caught on the boundary and some days all the edges and nicks are falling short of fielders. I did not finish my spell because while bowling that delivery to Irfan Pathan, I lost my feet.

As I rolled, I felt my ankle and knee. Instead of risking my knee which is still tender, I decided to leave the field and tend the sore knee with ice pack.

We always felt the total was gettable. Once the openers rocked and brought the run-rate to mere five an over, we were never in danger. India could not have stopped us thereafter, we knew it was not going to be an issue. I spoke to Nathan Astle later and asked him if he thought the Indian fast bowlers had bowled poorly.

Astle felt they had just played good cricketing shots. It was also probably an easy time to bat as the ball was new and coming onto the bat nicely.

Later, there was a battle of attrition against the spinners though Harbhajan Singh was negotiated better than the others. It was simply because our guys had plans to counter this outstanding off-spinner while against part-timers, we did not have a game plan.

You tend to be respectful to frontline bowlers while against lesser and unknown trundlers, you tend to relax and be unsure about them. We looked to play Harbhajan with minimum of risk and it worked.