“In Goa, many voters were unhappy with the Congress government,” Sonia Gandhi accepted today in one of her rare interactions with the press. Many would say that was an understatement. 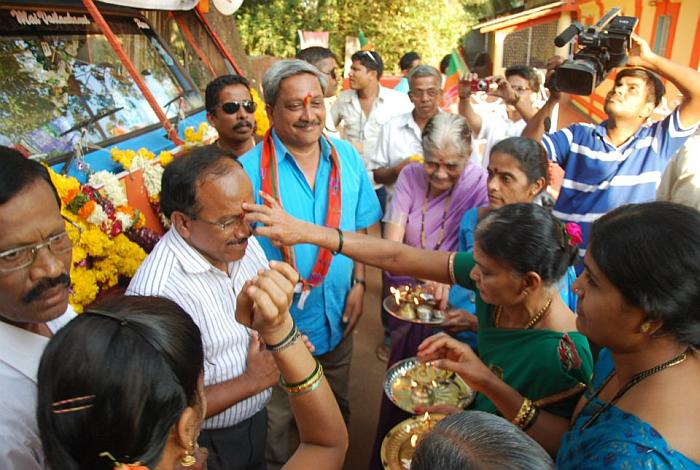 The Lotus Has Bloomed

“In Goa, many voters were unhappy with the Congress government,” Congress President Sonia Gandhi accepted today in one of her rare interactions with the press. Many would say that was an understatement. In one small village, Velsao, in South Goa – long taken for granted by the Congress as its bastion – the BJP candidate who is also a former minister, Matany Saldanha, romped home. He had joined the BJP in January and was one among the six Catholics the BJP had given a ticket to. Two other independents whom the BJP supported also won. A gamble that paid off.

There was frenzy outside the counting centre as each BJP candidate became victorious. Supporters chanted, “Ful’lem re ful’lem, kamal ful’lem and kabar re kabar, family raj kabar (the lotus has bloomed and family raj is over). Excited residents in Velsao set off firecrackers, then called Matanhy and held the mobile close to the bursting crackers so he could know that they were celebrating. They were not party workers but were delighted that they had collectively punished the Congress and that was the scene wherever Congress stalwarts like the Alemao brothers had been humbled. Sharon Alemao, the sister of Valanka (Congress Benaulim candidate) had bragged to me before the elections: “She has gone and won.” Only the first part of her prophecy has come true with Valanka and her cousin, Yuri, losing their maiden elections.

Kamlakant Naik, a Velsao (Cortalim constituency) taxi driver, had told me, “Goa is in the mood for change. We are fed up of climbing prices and corruption.” And the BJP, which contested 28 seats (won 21) – in alliance with the Maharastrawadi Gomantak Party which contested 8 seats (won 3) and supported independents in 4 others – capitalized on this mood. When counting was done on March 6, the BJP-MGP combine had won 24 seats, the Congress 9, Independents 5 and United Goan Democratic Party (UGDP) 2 seats.

You have to be a Catholic in Goa to understand what it means to have voted for the “dreaded” BJP. But the anger was so acute over the shenanigans of the Congress that many had no hesitation in telling you what should be a secret between you and the ballot box. The BJP helped by putting on display its most non-communal face.

Incidentally, Goa CM-designate Manohar Parrikar was a swayamsewak long before he joined IIT Bombay where he got his engineering degree and became a politician after he was discovered by the late Pramod Mahajan.

To Parrikar should go the credit for building the BJP in Goa, from four MLAs in 1994 to forming a government on its own now. Parrikar has been CM twice before between 2000 and 2005, but his dependence on MLAs (the bane of Goa for almost 15 years till 2007) who are adept at switching sides cost him his job both times. This time, Parrikar can relax and focus on the skills he is said to have, of being a doer.

Goa in the last five years had stability with Congress’ Digambar Kamat at the helm but he has been accused of allowing his MLAs to have a free run just as long as they did not pull the rug from under his feet. His lack of governance is blamed for the mining scam, the destruction of Goa where large tracts of land (even hills were flattened) were sold to property developers and corruption.

In the run-up to this election, Parrikar was upbeat. On the Jana Sampark Yatra that he went on covering the length and breadth of Goa, Parrikar focused on family Raj. He coined the acronym “MMAARR”(Monserrate, Madkaikar, Alemao, Alemao, Rane and Ravi Naik) to denote the 11 “family” tickets given by the Congress that had caused widespread disgust. “This is the last straw that will break the camel’s back,” Parrikar told me prophetically.

But Parrikar’s disadvantage is that he is seen as autocratic. There are Catholics who feel “we gave a chance” to the BJP which they frittered away. Now they are a bit nervous. “Let’s see what he will do,” says Melba Furtado, who has just retired from a bank. The nervousness is because during Parrikar’s last tenure his move to cancel the Good Friday holiday was a red flag for many. “Cancelling Good Friday holiday was an error. While it was not cancelled, even the proposal was an error,” he now says making it clear that he is going to be more inclusive this time.

“As CM he would even go and inspect the cleaning of drains,” laughs a resident of Panaji (he is the MLA here), the state capital. While people were impressed initially over his involvement in the minutiae of governance, he gave the impression that he was averse to delegate. But the mandate he has got will give him elbow room in an assembly which has 19 new faces that includes only one woman, Jennifer Monserrate of the Congress.

People’s anger over family Raj spared the husband-wife duo of Jennifer and Babush Monserrate. Even the Dhavalikar brothers – Ramakrishna and Deepak – of the MGP have the BJP to thank because had they not defected to “God’s party” on the eve of elections from the Congress they too would be rueing their fate!

“Family raj was the Congress’ Waterloo. It was embarrassing... the Delhi leaders who came to Goa for canvassing have no explanation for family raj. They used to say in private that something had gone wrong (with the ticket distribution),” former union law minister Ramakant Khalap was quoted as saying. For a man who has fought elections from 1974, Khalap had to sit on the sidelines and watch influential families corner tickets citing “Winn ability”.

The grapes are sour for Pratap Gauns who was the MLA from Sanquelim but lost this time to the BJP. “The family raj strategy proved expensive. We kept telling them not to give tickets to the families of MLAs, but they said they were winnable candidates,” Gauns said. Congress candidate from Fatorda, M K Shaikh, who lost too said, “My defeat is due to family raj politics of the Congress. It looks certain that the people do not want the Congress in power,” Shaikh said.

Shaikh’s loss was rebel Vijai Sardesai’s gain. Sardesai, who had told me that Goa would see an Arab Spring because of the family Raj tickets, was elated. Blaming Congress leader Oscar Fernandes for endorsing tickets to family members of Congress MLAs, he said, “Oscar Fernandes has cut the head of the Congress. God save Congress, God save Oscar.”

In nearby Poriem and Valpoi, although they were father (Pratapsingh Rane) and son (Vishwajeet Rane), the family Raj factor did not singe them. Pratapsingh Rane, in fact, a six-time CM of Goa, has created a record by contesting and winning his 10th election since 1972. But this term as an MLA is going to be in the shadows after his action-packed tenure of the last four decades including his stint as speaker in the outgoing assembly.

His controversial son – it was whispered that he was in league with Babush Monserrrate in the sale of large swathes of land in Goa – may have won but his seven “satellites” all lost. The buzz was that Rane junior’s masterplan was to get his men into the assembly and lay claim to the chief ministership of Goa. Almost the identical gameplan that the Alemaos (Churchill and his brother Joaquim and their respective children) fashioned to rule Goa. Is it any wonder that people were so angry with the Congress?

The CM of West Bengal, Mamta Banerjee, might be giving PM Manmohan Singh a migraine in Delhi but her party created no ripples in Goa. Even its party president, the octogenarian Wilfred de Souza, lost his deposit (he got 643votes in Aldona) although he had welcomed Congress rebels and given them tickets hoping to benefit from the anti-Congress feeling. Most TMC candidates could not even get 1,000 votes.

There were two exceptions, however, Sameer Salgaocar, the son of mine owner Anil Salgaocar, who got 4,591 votes in Mandrem and Margao Municpality chairman Savio Coutinho who got 1,873 votes but did not make a dent in the 4,000-plus winning margin of incumbent CM Digambar Kamat.

Goa’s heart beats for football even though in recent years cricket is very visible. It’s no surprise that footballers should make it into the assembly too.

As a footballer, former Salgaocar and MRF goalkeeper Avertano Furtado, was used to blocking a ball headed for the goal. He did the same this election, blocking Churchill Alemao, ironically the owner of football club Churchill Brothers, from entering the assembly. Furtado, fought as an independent from Navelim(south Goa) constituency with BJP support. Furtado is the new assembly’s giant killer.

Another footballer who felled a Congress veteran is Benjamin D’Silva, a midfielder with the Salcette Football Club, and an executive committee member of the Goa Football Association. He too fought as an independent with BJP support from Velim (south Goa) and defeated Felip Neri Rodrigues.

The two will be joined by another footballer turned businessman, Glenn Souza Ticlo, who represents Aldona(North Goa). In his teens he was a footballer who represented Goa at the junior nationals.

Former CM Digambar Kamat, who also has made it to the assembly, was quite adept with a badminton racquet in his younger days.

Goans are very sensitive to stereotypes – for instance, Premnath’s character in the film Bobby is shown holding a bottle of booze in most of the film. A friend who wanted to marry a Goan tentatively went up to her father and asked his permission. He exploded: “All they know is to sing and dance. What are you going to do?” He relented finally, but that’s another story.

While NDTV was doing its coverage of results on Monday, one more stereotype played out. While results from most of the other states had started with a trickle and grew into a tumble about an hour after counting started, Goa had not opened its account. Prannoy Roy snickered: “Goa is still sleeping?” A reference to the sossegado (laid back) image Goa is associated with. CPM leader Subhashini Ali who was a guest in the studio, was disapproving. “Don’t get into stereotypes,” she scolded.

A Vote Of Disgust