'Politicians Are Not Sensitive To Religious Feelings'

'If political leaders could be kept in guest houses, what was wrong in keeping the Shankaracharya in confinement in the math?', asks the VHP International President. 'The state government should have been a bit more sensitive,' says the NCM ch 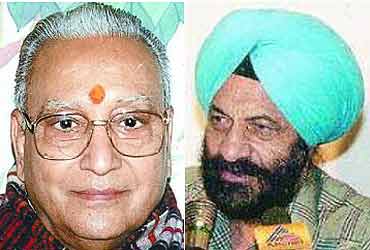 The full transcript of the BBC Hindi special programme Aapki Baat BBC Ke Saath with the 'International President' of the Vishwa Hindu Parishad (VHP), Vishnu Hari Damiya and the chairman of the National Commission for Minorities, (NCM), Tarlochan Singh. The subject for the programme: Why is there a clash between religion and law in India?

Nagendar Sharma: Why is the clash between religion and law increasing in India?

Vishnu Hari Dalmiya : It appears that the clash is there and increasing, even though it should not be there at all.

Nagendar Sharma: But why is it happening these days?

Vishnu Hari Dalmiya : Politicians are not sensitive to religious feelings and are not giving due respect as the public of the country does. For gaining political advantage, they do not respect the feelings which leads to the clash you are talking about.

Tarlochan Singh: There is nothing in the law of the country which could clash with religion, but sometimes those in power do create a situation, which leads to this clash.

BBC listener from Varanasi : I would like to ask Mr Tarlochan Singh, what is the NCM doing so that all religions are treated equally in India and the repeat of incidents like Godhra and the Best Bakery massacre does not happen?

Tarlochan Singh : In the Indian Constitution there is no provision for special treatment towards any particular religion. The Constitution is clear that all religions are equal, and everyone has a right to worship according to the faith. It is upto the governments of the day to exercise restraint, take care that in acquiring lands they should be patient with religious affairs. But there cannot be a special provision for any religion. We do not treat anybody like a criminal before the trial.

Nagendar Sharma: Mr Dalmiya, when the constitution of the country gives freedom to all the citizens to practice the faith of their choice, then why do organisations like yours wish to promote a particular religion?

Vishnu Hari Dalmiya : There is nothing in the Constitution to give preference to one religion over the other, but it happens due to vote bank politics, therefore we are not responsible, as we do not initiate anything on our own -- it is the politicians who do so and we just talk in accordance with the feelings of the people.

Nagendar Sharma: But after the recent arrest of the Shankaracharya of Kanchi, it was the VHP which called for a country wide bandh -- weren’t you objecting the course of legal process ?

Vishnu Hari Dalmiya : It is not a question of objecting to the legal procedure. Look at the way the Shankaracharya was arrested -- on the Diwali night, at around two-two thirty in the night. Please tell me whether any prominent political leader would have been arrested in the same way. If political leaders could be kept in guest houses, what was wrong in keeping the Shankaracharya in confinement in the math? It would have helped the law as well as others. He could have been questioned there itself and the legal procedure would have been duly followed.

Nagendar Sharma: Mr Singh, what does the NCM say in these matters? Is it right to protest outside when the matter is being heard in the court?

Tarlochan Singh : There has been some misunderstanding in this matter. No political party or organisation has said anything against the law. It is the manner in which the entire thing was carried out which has created resentment. The state government should have been a bit more sensitive. I would like to give you an example -- even the Britishers kept Mahatma Gandhi in Aga Khan Fort in Pune to ensure that he was accorded proper treatment. The law should take its own course -- there is nobody against it, but care should be taken that nothing provocative is done in which a feeling of hatred spreads - which would be against the law and society both - and the situation takes a bad turn.

BBC listener from Sharjah : Mr Singh, why is there a talk of Constitution and the law only when a religious leader is arrested? Tell me, where was the law when thousands of Sikhs were killed in the 1984 riots? Where are the constitutional bodies when the militants kill innocents? Why is there a hue and cry when militants are killed?

Vishnu Hari Dalmiya : Our view is that the law does not give the government any authority to give a preferential status to any religion, but in practice the political parties have been doing so. Now tell me what wrong would have happened if the Tamil Nadu government had put the Shankaracharya under house arrest in the math itself ?

Nagendar Sharma: So in this particular matter you were primarily annoyed with the Jayalalitha government? 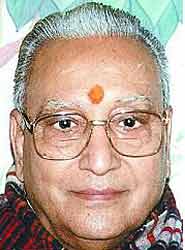 Nagendar Sharma: But Mr Dalmiya do you agree with the cultural policing being done by your sister organisations? Recently Bajrang Dal leaders threatened that if Hindu girls marry Muslim boys, their noses would be chopped off?

Vishnu Hari Dalmiya : No this is not right. The local level Bajrang Dal leaders who made such statements were wrong, they should consult their central leadership before speaking on such important issues. At times when people speak in provocation they go wrong and we do not consider it right. It is not a work of cultural policing, it should be done through persuasion.

Nagendar Sharma: Mr Singh what is the NCM stand on cultural policing? 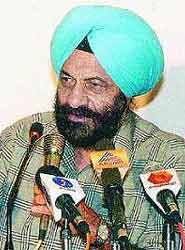 Tarlochan Singh : Any campaign that spreads hatred should be outrightly condemned, but care should be taken that any act of an individual should not be treated as an act of his/her community. Before linking any act with one’s community we should be careful to check the individual concerned. The major weakness in our country is the lack of dialogue between the different communities. We preach dialogue to the world, but how often do the majority and minorities talk to each other in India ? It is unfortunate that in the last 20-25 years no major efforts have been made in this direction. Only the National Commission of Minorities last year made an effort to bring the Hindu and Muslim leaders on the negotiating table -- it began well, but then the religious leaders backtracked. But we should not be disheartened. The thrust should be on dialogue, it would solve many problems.

BBC listener from Jaunpur : Why do organisations like the VHP cry about Hindutva only when forward caste leaders are arrested? I would like to remind Mr Dalmiya that the late Mahant Ramchandra Paramhans refused to take shiladaan from former UP CM Guptaji saying he was not a Brahmin. Could you tell me what Hindutva you talk about?

Vishnu Hari Dalmiya : It is your wrong inference that we stand only for forward castes -- we stand and speak for the entire Hindu society. You would be surprised to know that during a meeting of Dharamacharyas in Kashi we decided to have our meals at the homes of lower caste people. The shilanayas of Ram Janambhoomi was done by a non-Brahmin, therefore I reject this allegation.

Nagendar Sharma: Mr Singh, the present UPA government is bringing a law against communal violence -- what is the view of the National Commission for Minorities?

Tarlochan Singh : It is very clear. We had recently called a meeting of the Commission on the issue and have welcomed the government proposal for the reason that in our country those guilty for communal riots are not punished. Look at the case of 1984 anti-Sikh riots. So may Sikhs were massacred and till date, 20 years after the riots, not a single person has been convicted. The Indian law takes a long time and because of the delay involved, the rioters get away without any punitive action. We have welcomed this as we want early decision on all the communal riot cases.

BBC listener from Delhi : What is your stand on the Central government’s proposal for a Commission to deal with Communalism, as your body did nothing during Gujarat riots?

Tarlochan Singh : So far as the Gujarat riots are concerned, the work of NCM is tabulated in a 800 page volume. What we did for the riot victims was appreciated by them -- anyone can come to our office and have a look at our work.

Nagendar Sharma: Mr Dalmiya what is the VHP view?

Vishnu Hari Dalmiya : Any law against communal violence would be of useful only if it is implemented totally without any discrimination, but if there is discrimination, then any such law would not be of any use. We have nothing to say against this proposed law at the moment, what we are saying is that it should be applied equally to all communities, and not against any community in particular, that is all.

BBC listener from UAE : Why do religious leaders think they are above the law? That is the root cause of the entire problem.

Vishnu Hari Dalmiya : It is a misconception that religious leaders are above law. But they cannot be treated like criminals even before trial. They should be treated in accordance with their status. The law clearly says that the accused is innocent till proven guilty.

Nagendar Sharma: Mr Dalmiya, the BJP is a party which is ideologically closest to you, then why are you annoyed with it?

Nagendar Sharma: What are your relations with the BJP today?

Nagendar Sharma: Despite what you are saying, the VHP workers campaigned for the BJP in the last general elections in May.

Vishnu Hari Dalmiya : There is a lot of difference between working wholeheartedly and just completing the formality halfheartedly without being involved.

Nagendar Sharma: But they were asked to work for the BJP?

Vishnu Hari Dalmiya : Workers in individual capacity may have worked half-heartedly for them, but at the organisational level, we did not tell them to work for any party, and the results are there for everyone to see what fate the BJP met in these elections.

Nagendar Sharma: So still the relationship with BJP would continue ?

Vishnu Hari Dalmiya : It would depend on what BJP does and the line it takes towards Hindutva and Hindus. They are saying they would be doing, but till today they have done nothing, and therefore it is a bit difficult to trust BJP straightway.

'The Opportunistic And Unprincipled Politics Of Thiru Karunanidhi...'