Noida International Greenfield Airport (Jewar airport) will have the capacity of serving 1.2 cr passengers per year. Delhiites will be able to reach there in just 21 minutes. PM Modi will perform the bhoomi pujan of the airport today. 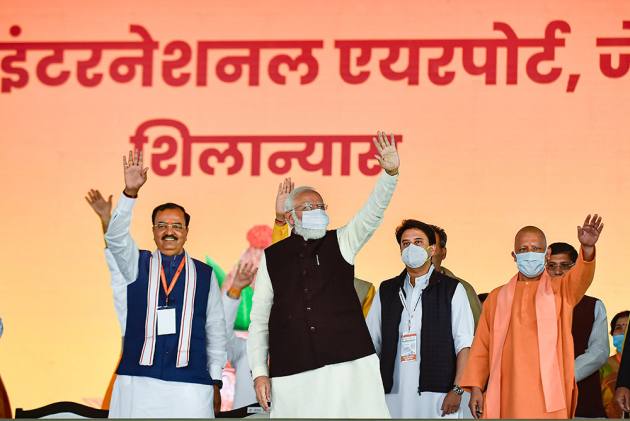 Prime Minister Narendra Modi laid the foundation stone of Noida International Greenfield Airport, also known as Jewar airport on Thursday. The airport will be located about 50 Kilometres south of Noida and would be accessible through Yamuna Expressway. The airport will have a capacity to serve 1.2 passengers per year and its work is expected to be completed by 2024.

The Prime Minister took part in the bhoomi pujan at 1 PM on Thursday.

After laying the foundation stone for the Noida International Airport at Jewar in Uttar Pradesh, which would one of the largest aerodromes in Asia, Modi highlighted the development activities in the poll-bound state and said the new airport will help the state become an export-centre whereby even MSMEs will have easier access to overseas markets.

He said the Noida International Airport, slated to be completed by 2024, will become the logistics gateway for North India.

He asserted that infrastructure is "not politics for us but part of national policy".

This will be the first net-zero emissions airport of India. Through facilitating seamless movement of industrial products, the Jewar airport will also play a crucial role in boosting rapid industrial growth of the region, which includes cities like Ghaziabad, Aligarh, Faridabad, Agra and small towns like Palwal, Bulandshahr, Khurja and Sikandrabad. The government of India is targeting to make the airport the logistics gateway of northern India which would help establish Uttar Pradesh on the global logistics map.

Where is Noida International Airport Located?

The airport is located near the town of Jewar, in Uttar Pradesh, approximately 57 kilometres away from Noida. It would take about an hour of driving on the Yamuna expressway to reach to the airport. The approximate time that the residents of Noida take to reach the Indira Gandhi International airport in Delhi's Dwarka is over an hour and a half.

How big is the Jewar Airport and what all facilities will it have?

It will also feature a multimodal transit hub, housing metro and high-speed rail stations, taxi, bus services and private parking. This will enable seamless connectivity of the airport with road, rail, and metro. Noida and Delhi will be connected to the airport through hassle free metro service.

The airport will have a state-of-art MRO (Maintenance, Repair & Overhauling) Service. The design of the airport is focussed on low operating costs and seamless and fast transfer processes for passengers. The airport is introducing a swing aircraft stand concept, providing flexibility for airlines to operate an aircraft for both domestic and international flights from the same contact stand, without having to re-position the aircraft. This will ensure quick and efficient aircraft turnarounds at the airport, while ensuring a smooth and seamless passenger transfer process.

How is the Noida airport being built?

The development of the first phase of the airport is being done with a cost of over Rs 10,050 crore. It is being built by the international bidder Zurich Airport International AG and its first phase work is scheduled to be completed by 2024. It will also be India's first zero-emissions airport. With the addition of Jewar airport, Uttar Pradesh will become the only state in India to have five international airports.