Pictures That Missed the Exhibition

Funny how freedom of expression -- so indispensable for the survival of Western Civilization when it comes to inflammatory and dangerous anti-Muslim imagery -- gets jettisoned in a hurry when it comes to exposing war crimes. 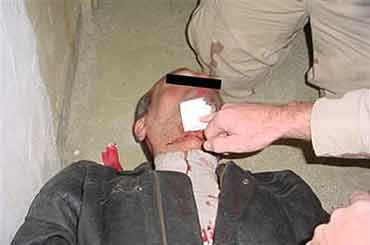 Yesterday (February 16), Australia’s public broad caster, SBS, aired some 60 unpublished photos of torture at Abu Ghraib prison on its show Dateline at 8:30 PM. The images were rapidly re-broadcast on Arab TV and other news outfits and have been condemned immediately as a violation of international law by the International Red Cross. (1)

The new detainee diorama -- a world exclusive, apparently -- includes pictures of bleeding and hooded prisoners bound to beds and doors, of naked men handcuffed together or in a pile, of corpses, of dogs snarling at the faces of prisoners, of cigarette burns on buttocks and wounds from shotgun pellets, and of even more graphic sexual torture. And it comes on the heels of a British video showing British soldiers brutally assaulting unarmed Iraqi teens in Basra. No one can now question that criminal behavior was rampant among Coalition Forces.

The Aussie torture-trove is culled from a set deemed unfit for the tender sensibilities of the American public but shown to our no doubt much sturdier Congress and Senate members during hearings in the summer of 2004. That was shortly after the Abu Ghraib scandal first broke -- in mainstream journalism, that is. Of course, it was pretty much plastered all over the alternative press for at least a year before CBS 60 Minutes (on April 28, 2004) and the New Yorker got around to picking it up. Still, they never got to the most graphic pix...involving, we hear, women being forced to bare breasts and genitals at gun point. (2)

These are -- in part -- the pictures that the government has been battling to keep under wraps for more than a year now. Even when last year a judge gave the ACLU access after a Freedom of Information Act request, the government appealed, claiming publication might fan anti-American sentiment -- and who could possibly dream of doing that?

Funny how freedom of expression -- so indispensable for the survival of Western Civilization when it comes to inflammatory and dangerous anti-Muslim imagery -- gets jettisoned in a hurry when it comes to exposing war crimes.

Mike Carey, the executive producer of the SBS show believes that several journalists also have the pictures and wonders why they were not published until now: "I think it’s strange, maybe they think it’s more of the same." (3)

It was Dateline which first exposed the role of the Howard government in the torture of Australian citizen Mamdouh Habib, illegally detained and then tortured in Egypt and at Guantanamo Bay. (4) But, here Carey sounds rather naive. What does he think journalists today are about, anyway, if they can’t double as megaphones for government propaganda? Reporters who had the pictures but didn’t publish them were only doing their bit for the war effort, like the good little foot-soldiers they are. Or the good little intelligence/PR operatives. Think male escort-turned White House-presstitute, Jeff Guckert-Gannon. (5)

The first time around -- in May 2004 -- when the pressure was on for the government to come clean and Rumsfeld’s head looked like it might roll -- another decapitation conveniently swept everything else off the stage. (6) That was the videotaped beheading -- almost undoubtedly staged -- of American tower repairman, war profiteer, and Republican operative, Nicholas Berg, a passing acquaintance, as it quaintly turned out, of Zacarias Moussaoui. (7)

Berg had a rather checkered career that took him from interviews with Michael Moore to fixing radio towers at Abu Ghraib to partnering with an Iraqi cocaine-dealer, Al-Taee, with connections to the Russian mafia. While awaiting deportation, the multi-faceted Taee, who once shared photo space with Paul Wolfowitz, also apparently managed to pick up a raft of gigs on Fox and Clear Channel where he was oppressed-freedom-fighter-in-residence and big-time cheer-leader for the Iraq war. (8)

But his spotty resume and less than savory social circle didn’t stop Berg from becoming the poster-boy for the Freepers and the semi-lunatic fringe of right-wing storm-troopers, frothing at the mouth over all the wasted attention on some naked Iraqi blokes. They got their way. By the middle of May 2004, the pressure was off. Torturing hundreds of innocent men, women -- and it looks like -- children, simply didn’t cut it next to the snuff movie of the all-American Berg. Rumsfeld remained on his perch, without even a flick on the wrist from the President, who -- it should be said -- is also mentioned in the ACLU memos as having penned an incriminating executive memo. But you’d never see that in the press. Or that heavily redacted directive -- courtesy of one Paul Wolfowitz it seems -- telling Gitmo interrogators to masquerade as FBI agents.(9)

But you have to wonder where Carey himself got his bloody little album. And what sense it makes -- or doesn’t make -- for the thing to show up on Australian TV now, more than two years after the military first noticed it had a torture problem, in the middle of a sudden hemorrhage of inflammatory imagery and news -- renditions, the cartoons, the Basra child-abuse....

A lot of fog here, all right. Is it the fog of war though?

And now can we see those pictures of Iraqi women, please?

Lila Rajiva is a free-lance journalist and author of The Language of Empire: Abu Ghraib and the American media, (Monthly Review Press).

(2) "800 new pictures add to US disgust: Stills shown of women forced to bare breasts," Dan Glaister and Julian Borger, The Guardian, May 13, 2004 and "Torture at Abu Ghraib," Seymour Hersh, New Yorker, May 10, 2004. For an analysis of how constant charges of "fraud" managed to muddy the whole question of the torture of Iraqi women, see "Iraqi Women and Torture: Part I -- Rapes and Rumors of Rapes," Lila Rajiva, Dissident Voice, July 27, 2004 and "Colonial Violence Against Women In Iraq," Ghali Hassan, Countercurrents.org, May 31, 2004.