A photo of cricketer-turned-politician Imran Khan, the chief of Pakistan Tehreek-e-Insaf (PTI), 'depicted' as the Hindu god Lord Shiva has reportedly gone viral on social media, triggering outrage among the Hindu community in Pakistan.

The photo was posted on a Facebook page by PML-N supporter on April 8, reports The Hush Post. The page, titled 'We Love Nawaz Sharif, Shahbaz Sharif and PML(N)', is supposedly meant for the supporters of former Prime Minister of Pakistan Nawaz Sharif and his party PML-N. 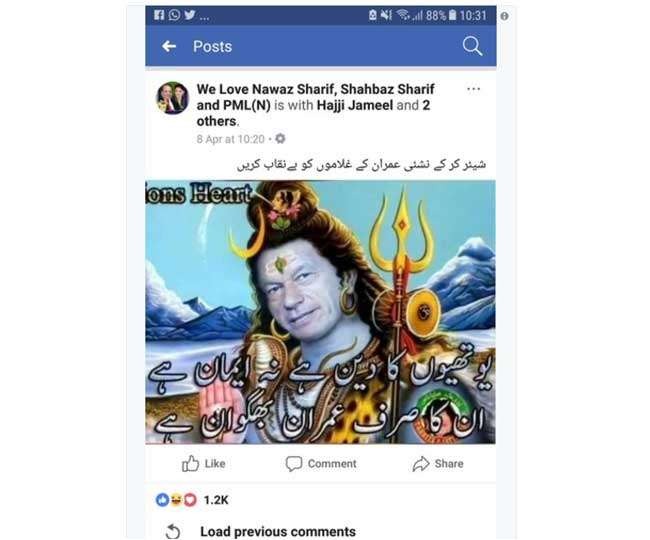 Slamming the post, several users in Pakistan took to Twitter to express their disapproval of the picture, demanding action against the Facebook page that posted the photograph.

One such user, Kaidar Nath tweeted the photograph and said, "If we are equal citizen in pakistan so what is this ?  This is not in islam that. We want to take action against this. We are Pakistanis but first we are hindu. I requested to @AsimBajwaISPR @MaryamNSharif   @ImranKhanPTI  to take action ageist this facebook page."

Another user, Ali Rashad commented, "Let us all condemn this cheap act by the PMLN cyber wing. They have hurt the sentiments of Hindu Pakistanis, who have equal rights and stake in this great country."

The picture has not only drawn protests from the minority Hindus in the Muslim majority nation but the Pakistan Parliament also witnessed uproar over the issue.

Following the social media outrage over the photograph, Pakistan's National Assembly Speaker Sardar Ayaz Sadiq on Thursday asked the interior ministry to crack down on any individual or groups involved in posting blasphemous material about the Hindu religion.

"Such posts have deeply hurt the religious sentiments of more than four million Hindus living in Pakistan. Such offences were covered by cyber laws and should not remain unpunished," Pakistan parliament speaker was quoted as saying.

The parliament had also demanded a legal action against the perpetrators for posting blasphemous content, he asked the speaker to order an inquiry into the matter.

Another parliamentarian Lal Chand Malhi said there was evidence of a malicious online campaign targeting the minority community and desecrating images that were revered by millions of Pakistani Hindus.

In response to the complaints, Speaker Sadiq directed Minister of State for Interior Tallal Chaudhry to complete the inquiry within seven days.

He also directed the state minister to lodge a case against the culprits with the Federal Investigation Agency.

Lal said he along with Malhi prepared a complaint letter which will be handed over to Chaudhry.

He said that the social media campaign against the Hindu community had been going on for two weeks.

He alleged that such content was being generated by the social media wing of a political party.

Commenting on the PTI allegation, Chaudhry said the government strongly condemned all such acts.

He said the internet was full of blasphemous content that was used not only to hurt the feelings of the Hindu community but also to insult Muslims.

Former interior minister Chaudhry Nisar Ali Khan had in the past also taken up the issue of blasphemous content on Facebook and even asked the social networking websites to not allow such offensive posts.

Tallal Chaudhry assured the house that his ministry would investigate the online attacks on the Hindu faith and seek out the culprits.