'People Are Digging Their Own Graves'

Poet, critic and social scientist, Dr Hiren Gohain on the upcoming Assam Assembly Elections and the failure of the civil society and the media 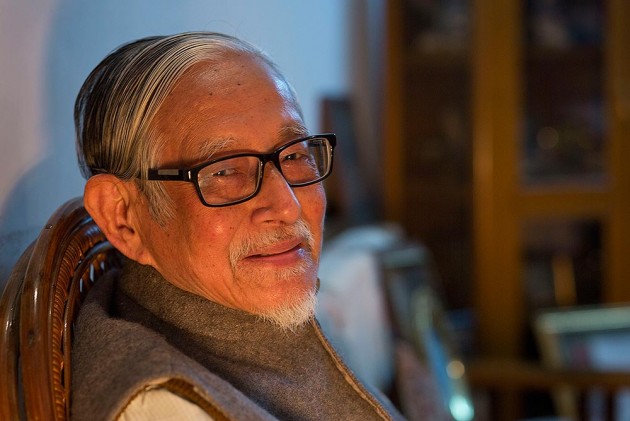 Dr Hiren Gohain, poet, critic and social scientist, is an astute observer of Assam and a prolific writer. He had played a major role in the mediation between the Government of India and ULFA insurgents. Rakhee Kalita caught up with him in Guwahati for his comments on what he acknowledges is a crucial election. But the civil society and the media, he says, have failed to prevent people from digging their own graves. Excerpts from their conversation:

How do you see the forthcoming election in Assam?

This is a crucial election and has the potential to change the character of politics here—for better or for worse. The BJP, fired by the last general election, has spread its roots in all parts of Assam. The rise in Muslim population—they now constitute a majority in several districts—has enabled BJP to play on communal anxieties. The regional political parties seem unable to stand on their own. The Left parties have been relegated to the background. The Congress is tainted by corruption and there is popular outrage against arbitrary rule. The AIUDF has its constituency among immigrant Muslims in the main. If Hindutva forces gain in the election, it will be forced to resort to politics of polarisation that might spell disaster for democratic politics.

The induction of the Congress rebel minister Himanta Biswa Sarma in the BJP is seen by many as a game changer. Would you agree?

He is well-known for his manipulative skills and unscrupulous intrigues. But he has aroused hostility among grassroot BJP workers in many constituencies. On the other hand he seems to have successfully cobbled alliances with the BPF, powerful among the large Bodo population and which has pockets of influence in many areas outside the BTAD. He has also helped in forging BJP's alliance with the AGP,which had been in a limbo but this has been met with howls of protest in many AGP strongholds where younger workers had sought tirelessly to keep the party standard afloat, and is likely to prove costly to the leaders. Sarma is now among the most visible faces of the BJP ceaselessly haranguing crowds on the '13year-old misrule of the Congress',of which he himself had been a leading minister for thirteen years.

All the political parties seem to have been affected by defections…

Every party except the weakened left has witnessed shrill revolts on the ground. The Congress in particular is likely to lose some of the steam it had gained from the initial confusion in BJP ranks. Hundreds of disappointed candidates in both camps have been shrieking revenge on TV screens for having been denied a chance to serve the people.

Who do you think will gain from the prevailing confusion?

I believe an alliance of small tribal groups is most likely to gain from this shadow of uncertainty in both the major camps. The AIUDF which is by and large influential in immigrant Muslim areas is desperately trying to keep its bastions intact, where the fear of a post-election pogrom by Jingoist elements has somewhat shaken the loyalty of its following. Its leader is vehemently protesting any secret understanding with Congress but Badruddin Ajmal appears most anxious to enter any ruling alliance.

What would you then say is the 'Big Picture' on the eve of the election?

The prelude to the election exposes the total ideological bankruptcy of electoral politics in our democracy and the threat of both run-away corruption and Fascist tendencies among parties that the ordinary voters appear to be blissfully unaware. I would have expected the intelligentsia and the press to show far more initiative and commitment to democratic values to prevent the people from digging their own graves.

Would you say political adventurism is Assam's most striking feature today?

The background to both endemic conflict and political adventurism is economic stagnation. The economic condition of the common people of this region has seen no improvement in spite of changes overtaking it. They are unable to find an exit from their lot.

Would you regard the state and the Northeast region to be largely peripheral to the national imagination?

Of course it's marginal. It's at best an exotic corner of the country disturbed by insurgency and capable of being converted to a tourists' paradise. The condition has become more critical with major decisions being taken more and more by international capital.

How do you assess the mind and mood of the youth in Assam today?

I am afraid that though there is plenty of creative potential among our youths, they have found themselves in some kind of a blind alley. Partly because of the disillusioned ending of the Assam Movement which passed into a phase of secessionist rebellion that cost the lives of 12,000 youths and provoked widespread military and police atrocities, social vision has practically faded. The present mood is one of escape into recreation that promises nervous excitement. There is no longer any yearning for re-building society. Instead, there appears to be careerism and rampant consumerism among those who cannot get away. They appear to be culturally disinherited from the native, cultural tradition—except as things to be sold to curious foreigners. They are more tuned to commercial mass culture and Bollywood hits bereft of any idealism.

The demographic changes over the last decades have stirred new political aspirations. Will they give rise to fresh demands for new homelands?

That seems to be the present scenario. But at best these divert attention from the fundamental problem I mentioned earlier, and they are unlikely to lead to a long, period of stability. Insurgency is likely to become endemic. Further some tribes or communities are so scattered that creating a state for them is likely to create more problems than it solves. That is happening in the BTAD area, a self-governing tract of the biggest non-Assamese tribe, the Bodos.

Assam is perceived as the Big Brother of the Northeast. Assamese chauvinism is said to provoke unyielding ethno-nationalism of smaller tribes—often unsettling stability and peace in the region. Would you agree?

To be fair, both Assamese chauvinism and smaller but equally aggressive ethno-national aspirations are products of a political economy dating back to colonial times. The economy is still dominated by big capital invested in plantation and extractive industries and resource plunder, that are of little benefit to natives who continue to exist on the margins.

Though there have been incremental changes, no radical transformation of the economy has taken place. Each community or ethnic group today is reduced to holding on to its own turf and threatening all suspected encroachers. The patronage of the Indian state is bestowed on big capital. The mainstay of the common people is farming which is woefully neglected and floods and erosion have taken their toll.

Assamese chauvinism was tolerated, even encouraged by the Indian state as long as it served its purposes. When smaller ethnic groups had their own Middle-class with demands of their own, the Centre conceded separate states and encouraged hopes for various degrees of autonomy. This brings temporary affluence to such middle-classes but saps their constructive energies with the drug of corruption. But the rural masses remain sunk in poverty and neglect. The Centre plays off different groups against one another and thus maintain some sort of equilibrium amidst chronic turbulence.

Does the key then to Assamese future lie in national parties in power at the Centre?

For more than half a century after Independence Assam has been ruled by Congress, a political party led from its headquarters in Delhi. Since the 1970s that party has become organisationally highly centralised and is led by a “high command”. The policies of that party in the state may not deviate significantly from that ordained from Delhi. And those policies tend to maintain the colonial pattern in the economy that put all the wealth-producing resources of the state at the disposal of big capital.

On the other hand, the regional forces that have a mass base lack the foresight to conceive a viable economic agenda, since they too inherit the middle-class mind-set. All they can think of are pockets of protection which in the end make no difference. A well thought out regional vision is required to confront head-on policies of the Indian ruling class with appropriate strategy under the ambit of the Constitution.

How would you sum up the anxieties and aspirations of the common man on the street?

I am afraid his perception may be the product of sustained propaganda in the media. He is concerned for security of life and livelihood but has no clue as to how that is to be attained and is rather likely to blame outsiders for his plight. But the point is to build up an economy that assures him a decent livelihood and provides him space to work out his creative energies in different fields. Peace and stability will automatically follow if that comes to pass.

How do you see the role of the regional media?

I am not assured that the regional media are highlighting the real needs, concerns and the ground reality. Besides constraints like the need for advertisement from the government and big business—their immersion in banalities of day-to-day politics tends to add to the confusion. Besides the constant urge to sensationalise news for its sale value appears to have added to the pathology of tension that threatens cool judgment. There are a handful of honest and thoughtful journalists but they cannot alter the general trend.

Interviewer Rakhee Kalita is an academic who teaches at Cotton College, Guwahati.