Mohiniyattam is seeing more artistes earning a PhD, but not all the doctorates in this classical art are genuine. Some of them reek of ethical degradation and ugly collusion. 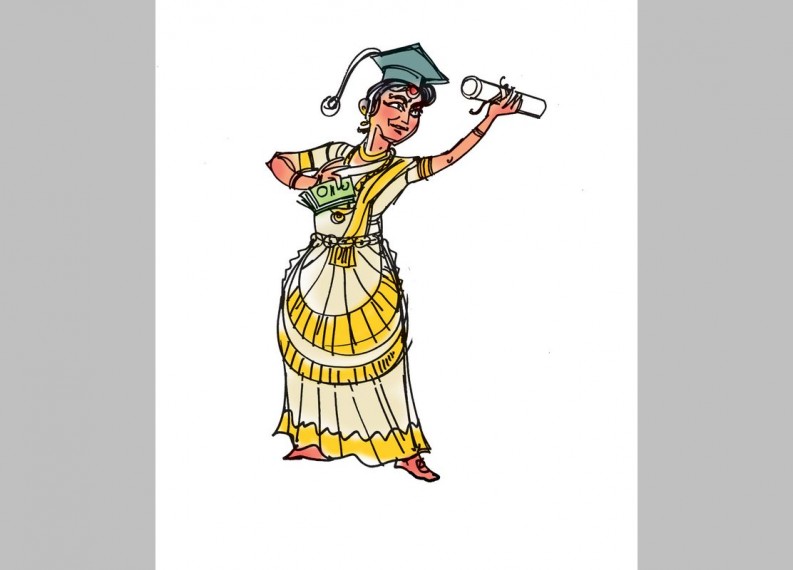 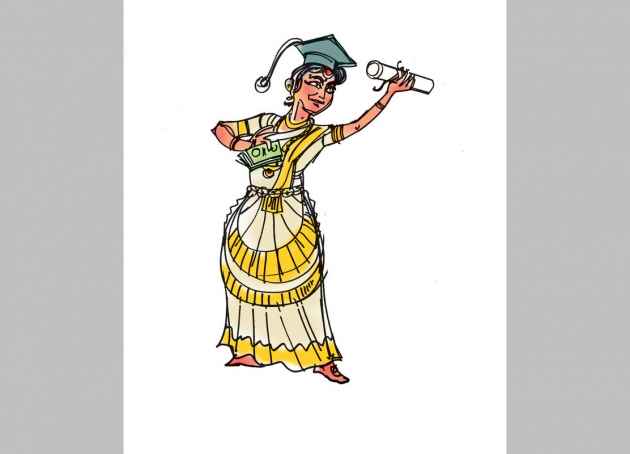 At an India cultural function in the US recently, danseuse Anisha Rajesh was intrigued by the conduct of the father of a classical vocalist-instrumentalist from her native Kerala. The man insisted openly that his daughter be reintroduced with the prefix ‘Dr’ she had the other day earned from an American university.

Anisha, as a PhD candidate in dance at Texas Woman’s University, has been researching on Mohiniyattam for the past five years. Its rigours have given her an idea of the US academic scene regarding doctoral studies in Indian classical forms. So, from where did this D.Litt come to the visiting artiste, wondered Anisha. Only a year ago had she noticed another Malayali Mohiniyattam dancer in their immigrant country “suddenly adding Dr” to her name.

“Of late, there are quite a few famous and not-so-famous artistes and performing Indian teachers in the US and India announcing their having received D.Litt from America. This country, one may say, has two such varsities,” observes Anisha,who runs Upasana Performing Arts Center in Houston. “Interestingly, these universities have the same address—leading to a retail complex for dinning and shopping in Honolulu, Hawaii. Both are upright in their claim that they are not accredited by an agency recognised by the US secretary of education. That way, the recipient is just taking a chance or is being fooled.” Three months ago, Anisha, who trains students in Mohiniyattam and another south Indian classical dance Bharatanatyam,broke the matter on social media. That invited shock and condemnation from many, especially Mohiniyattam practitioners, teachers, scholars and buffs.

Leading danseuse Neena Prasad said such fake doctorates exploit a de-humanised system that wants to objectivise art for the benefit of uncaring officials and bureaucrats. “From festival committees to government institutions all the way to ICCR (Indian Council for Cultural Relations, autonomous under the India government) pernicious system has evolved that allows (and even seeks) to replace artistic merit with bland paperwork,” she adds.

Neena, who is a PhD (2001, from Rabindra Bharati University, Kolkata) and is a noted performer of the the Kerala dance known for its delicate feminine grace, recalls the dismay she felt when a major art festival organiser reassured her that he had insisted in the committee that no artiste less than a PhD holder be included for performance. “As long as the system promulgates such an approach, shenanigans would thrive—both in recognised universities and the make-believe ones,” she notes. This, “when the field has already a dearth of genuine research in the subject.” Lawyer Mani G. Marar, who is an admin of a leading Facebook group on Mohiniyattam, describes the matter as a “scamhappening in India” with the US connection being flaunted for better prestige. “A university cannot be just a website. It’s is a Tamil Nadu-based racket around Madurai,” he adds. “So, if its people have nothing to do with the US, then it becomes a matter of concern for UGC.”

Mani, who practices with the Kerala High Court, alleges the varsity charges Rs 50,000 to Rs 2 lakh for a D.Litt. “When they get some dozen applications, they book a venue to hold a valedictory function in front of a banner,” he adds. “To add credibility, they invite a couple of accomplished and unsuspecting artistes as well.”

It’s a far cry from, say, the case of K.M. Abu, who submitted his PhD thesis in 2013 after painstaking research, and was awarded a doctorate by Kalamandalam (a deemed university) in mid-January 2015. The topic of the dancer, now 50, was on the life and times of Kalyanikutty Amma, considered the pivotal figure in the resurrection of Mohiniyattam in the mid-20th century after her training in the dance at the 1930-founded Kalamandalam, the state’s premier performing-art institution.

In complete contrast to such academic rigours was a November 2017 event that young dancer Divya Nedungadi has to shockingly recall from her native Palakkad. The east-central Kerala city saw the above-mentioned “international” varsity conferring a doctorate upon a dancer locally known for his skills in training school and college students for youth festivals.

Divya, 29, is a PhD from West Bengal’s vintage Visva-Bharati University at Santiniketan—the youngest Mohiniyattam dancer to have received a doctorate. From her alma mater comes Pallavi Krishnan, a Thrissur-settled Bengali who learned advanced Mohiniyattam in the 1990s from Kalamandalam in Cheruthuruthy near Shoranur. Pallavi notes that “fake doctorates” is a recent practice in the field. “Don’t its beneficiaries ever feel guilty for cheating not the art fraternity,” she asks. “What kind of a message do they send to their own students?”

Scholar-writer C.P. Unnikrishnan is of the opinion that D.Litt is anyway an insult to hard-earned doctorates. “If you are honouring a great artiste, let it better be with a civil honour like Padma or Akademi fellowship,” he maintains.

Boston-based medical practitioner Sapna Govindan, who performs Mohiniyattam, sees “half-baked and downright bad” dancers as teachers/experts around her. “Many Indian parents feel a need to expose their children to native traditions, taking them to the dance teacher next door. Who looks at credentials or ability?” Adds legendary danseuse K.J. Sarasa’s frontline disciple Rathna Kumar, who runs the Anjali Center for Performing Arts in Texas: “By keeping quiet, we are condoning such wrong activities.”

Anisha says several classical dancers residing in or visiting India customarily donate money to organisations to get stage shows. “Such performers get their finances as tuition gurus. A part of this money is channelled to earn fake doctorates, which give them an edge in winning awards, publishing self-promoting articles or making documentaries,” she claims. “The cycle continues.”