Rashtriya Janata Dal chief Lalu Prasad Yadav on Sunday held a much-awaited "virtual interaction" with workers of his party back home in Bihar. 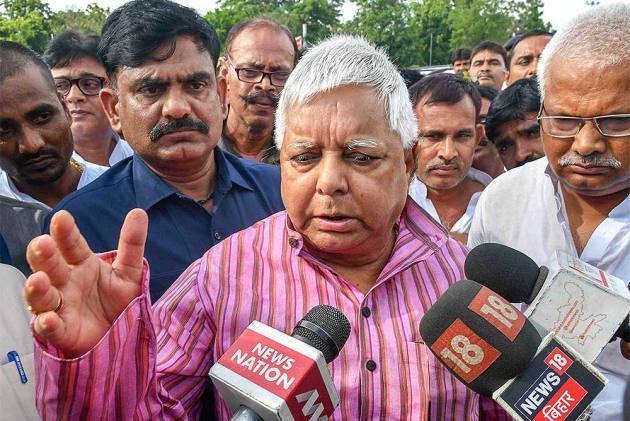 Out on bail after spending more than three years behind bars, Rashtriya Janata Dal chief Lalu Prasad Yadav on Sunday held a much-awaited "virtual interaction" with workers of his party back home in Bihar.

Prasad, who recently walked out of a jail in Ranchi after the Jharkhand High Court granted him bails in all the fodder scam cases wherein he has been awarded punishments, spoke from New Delhi.

The septuagenarian, who suffers from multiple ailments including diabetes, cardiac and renal problems, has been convalescing at his residence in the national capital upon release.

His younger son and heir apparent Tejashwi Yadav, who is at their Delhi home to look after the ailing father, also spoke on the occasion. Yadav, who delivered the introductory speech, said that his father was "unwell, his oxygen levels hovering around 85, a reason why Lalu ji will not speak much".

It was not clear whether Prasad's oxygen levels were down because of some other problem or he had been infected by COVID-19.

Nonetheless, a wave of dejection swept over the party rank and file who were eagerly looking forward to hearing from their leader, famous for his flamboyant wisecracks and earthy sense of humour.

Prasad told the listeners party MLAs and those who had contested the assembly elections on RJD tickets but lost to rise to the occasion when the pandemic "has reached our farthest villages".

The listeners, who had been instructed to attend the "virtual interaction" from their respective constituencies via video conferencing, were asked to set up "RJD COVID care centres" in their areas of influence.

They were also urged to "expose and thwart" any instances of black marketing of oxygen cylinders and other important medicines, and help needy patients with food and other logistics like ambulances.

Prasad's maverick elder son Tej Pratap Yadav, who dotes on his father but has been overshadowed by his suave and shrewd younger sibling, also spoke on the occasion.

He proposed that in all the 243 assembly segments of the state, the party should run "Lalu Rasoi" (Lalu community kitchens) where food would be prepared and distributed free of cost.

The proposal, predictably met with applause, though it was not yet clear whether it was going to lead to fruition.

Prasad, who was the chief minister of undivided Bihar for seven straight years, first got convicted in a fodder scam case in 2013, which led to his disqualification from contesting elections.

He was, however, soon out on jail and took part in the 2014 Lok Sabha polls in which his party came out with an unimpressive performance in the face of the "Modi wave".

A year later, though, he emerged as the star attraction in the assembly polls which his party fought in alliance with arch rival and Chief Minister Nitish Kumar's JD(U).

Though out of race himself, Prasad ensured through his electrifying campaign a spectacular comeback for the RJD that had been drubbed by the NDA in the 2010 assembly polls, and both his sons made successful debuts, with Tejashwi becoming the deputy CM and Tej Pratap getting a cabinet berth.

Although out of power now, the RJD once again emerged as the single largest party in the assembly elections held last year, which also saw the 32-year-old Tejashwi steering the party to an impressive performance despite the absence of his charismatic father.