'Our College Has Been A Pressure Cooker'

An interview with Devansh Mehta, the student editor of the banned e-zine of St Stephen's college. 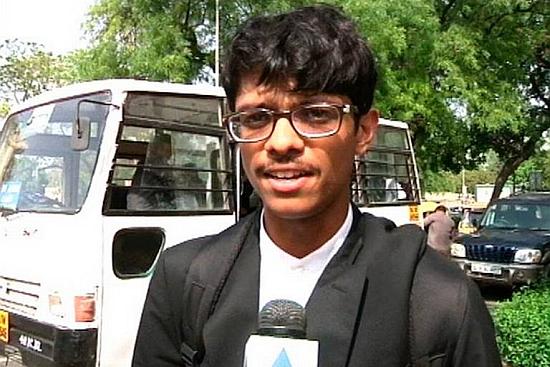 After a long tryst with authority interventions, suspension orders and an ongoing tussle with the principal at St. Stephen's college, Devansh Mehta, the student editor of the banned e-zine of St Stephen's college graduated on Saturday with a loud applause from his fellow classmates. In a candid interview with Hansa Malhotra, Mehta talks about the debacle over "freedom of speech", his motive behind starting the e-zine and his future plans.

You have been in trouble with authority before. Tell us about that.

Once, during my first year, I had a little bit of extra food on my plate, an extra roti. Instead of throwing it in the dustbin, I gave it to a dog. I was caught doing this and my college ID card was confiscated, which I had to collect from the principal. Since I am a philosophy student, the principal asked me for a philosophical argument as to why I broke the rule of not feeding dogs. I gave him an intentionalist account, saying that I hadn't broken the spirit of the rule. The rule was created because visually challenged students would step on the dog, and it would bite them. I told him that I had only fed a dog, which didn't bite me back. Since childhood, I have been taught never to waste food and in all of this, everybody including me, the dog, my parents and the visually challenged are happy. I asked him, who is unhappy here? He was quite impressed and gave me my card back.

The second time, there were protests in my college regarding the discriminatory standards between the girls and the boys hostel. The issue was timings for the girls hostel, which were different from those of the boys' hostel and we found it unfair. We intended a democratic dialogue with the college authority but the entire thing culminated into a General Body Meeting where the principal said that girls and boys are like stones and eggs, hence the difference in standards and rules. As a result of all this, the authorities introduced residence interviews, where after every year you need to prove whether you are qualified for residence. This is basically a tool of control. Students who were a part of the protests were thrown out of the residence, including me. It became quite clear that if you go against the principal, you will be losing your housing.

What was the motive behind starting the online magazine, St. Stephen's Weekly?

What is your take on the increasing trend of a "ban culture" that seems to be emerging.

Yeah there is this cult of banning. The problem is that banning implies a dichotomy between right and wrong. It presumes that there is an objective line between something that's right and wrong, and then you ban what's wrong. But right and wrong are subjective and individual categories, hence when you ban something you are imposing your own value system on somebody else. That I think is problematic.

Do you think your run out with the principal seems to have resonated with a majority of students across colleges culminating into an overwhelming support?

Our college has been a pressure cooker and this incident was like a release for all the voices that hadn't spoken up till now. I think the media has been a huge support in carrying articles and giving it coverage, which has contributed to an atmosphere where students are not hesitant to speak out anymore. After the court order came out, a lot of students from colleges across the country contacted me, sharing their own experiences regarding censorships they have endured. There is a certain sense of resonance here, for sure.

Why do you think your student endeavour faced censorship from the college authorities?

The reason is that the authorities, including the principal need constant assurance that they are in control of everything. When we published the first edition of the weekly, the principal got to know about it a few days after it came out. He said that things were happening in college that were not under his control and I think that's what upset him the most.

Despite suspension threats, you finally graduated with a certificate from the Chief Minister. Did that feel like victory?

I don't know about victory per se, but what thrilled me the most was when I went up to take the certificate, the entire hall broke into a massive applause and standing ovation. That felt like victory, in the sense that I had made a difference somewhere.

Why did you choose philosophy as a discipline for graduation?

Philosophy is a discipline that constantly provokes you to ask questions. In our classroom, I don't even have to raise my hand to ask a question. If the teacher is discussing something, I can simply interrupt. It's more like a conversation.

My immediate plan is to complete all my assignments that are pending. Beyond that, I am leaving from Columbia School of Journalism in July. And before I turn 30, I want to cover a conflict area, like Syria or Iran and live there for a year or two.

How did you parents respond to the entire controversy?

My parents have been this constant rock in everything that has happened. There was a time when I was told that after the enquiry report came out, I was given a chance to apologise and because I did not comply I received the suspension letter. I asked my parents whether I should have apologised or not, and they said that if I don't think I have done anything wrong, then I need not apologise. They said that college is not a place where you should lose your idealism and harbour cynicism towards fighting for what is right. That way, they have been extremely supportive.

What is that one thing about you that is not in the public discourse yet?

I think people people know about my fainting social experiment, but there is something even more mean than that. I also do what I call the puking experiment. I travel in the metro and pretend to puke to observe how helpful people are. I was expecting people to simply get up and move away, knowing that a projectile of puke might be coming their way. But this person once put his arm around me and said "Ulti toh karni hai, toh kardo." He put whatever he was reading on the floor and asked me to puke and said that that everything else will be take care of. A stranger showing this kind of niceness was amazing.