'Our Batting Is A Worry'

'We are heavily dependent on the top order and do not bat too deep down,' avers the former skipper 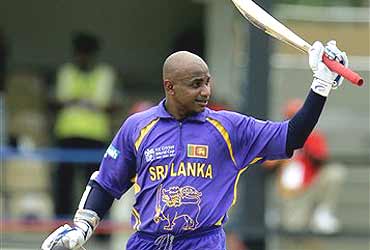 Ranatunga said the team was heavily dependent on the top order and did not bat too deep down.

"I'm still a bit worried about the batting though not so about the bowling," said Ranatunga as he indulgently looked at Mahela Jayawardene's side looking to emulate his 1996 feat after almost a decade.

The former batsman praised veteran Sanath Jayasuriya, who had shown commitment in terms of his performance and fitness and was still going strong even though he is nearing 400 matches in one-day internationals.

"Sanath has really shown commitment. His batting has improved and he is matching the youngsters in fitness. But the batting is heavily dependent on the top order," he said.

In the bowling department, Ranatunga rated Muthiah Muralitharan and paceman Chaminda Vaas as the lynchpins of Sri Lanka's attack but said the edge came from the unusual bowling style of Lasith Malinga.

"He is a sharp-shooter who can take wickets with both the new and old ball. He has really added edge to the bowling attack," he said.

"They are playing very good cricket and I think they can go all the way," Ranatunga said.

He was, in particular, happy with the form of Mahela Jayawardene who played a captain's knock on Tuesday to steer his side to the final.

Recalling the day when he persuaded a young, reluctant Jayawardene to come back to the game he said "I saw Mahela playing school cricket and I knew he was blessed with talent.

"He lost his brother to a brain tumour when he was young and he was not really interested in playing cricket.

"But we dragged him in. He was very close to his brother. He said he (his brother) was a better cricketer than he was but I didn't see him play. I invited Mahela to come and play for my club (the Sinhalese Sports Club in Colombo).

"I opened with him until we could find him a spot in the middle order. He could read the game so well and I got him to captain our under-23 side."

Ranatunga gave Jayawardene his first break in international cricket when he included him in the XI for a Test against India in Colombo in 1997.

Mahela did not disappoint him with a sweetly timed half century though it was the record total of 952 which dominated the memory.

Now, Jayawardene at the age of 29 is a game away from emulating his hero's achievement of a World Cup triumph.