The best thing that Modi can hope for in this visit is that he is able to mobilise Indians in America to vote Republican and try and help Trump return to power, writes author-columnist Aakar Patel. 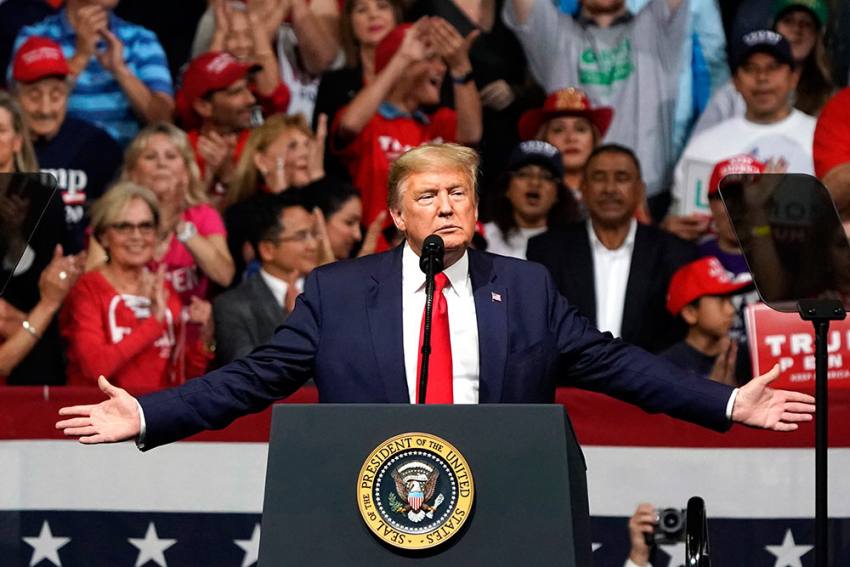 US President Donald Trump speaks at a campaign rally in Phoenix.
(AP/PTI)
Aakar Patel 2020-02-23T11:03:09+05:30 Trump's India Visit Will Be Historically Insignificant And Mere Entertainment For Many 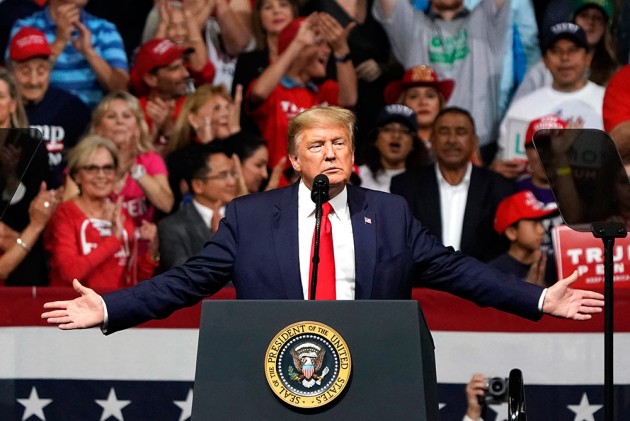 US President Donald Trump will be on a two-day visit to India -- Ahmedabad, Agra and Delhi. He is not particularly keen to travel, and this appears to be common to most Americans. At the age of 16, I spent a year in an American village. One afternoon, there was a desk in the school that offered an exchange programme under which Americans could travel for a period abroad just as I had. If I remember right, nobody signed up.

Donald Trump, since becoming president, has visited 20 countries, the majority of them in Europe. He has been to France four times. He dislikes the developing world  and doesn’t want immigrants from what he calls ‘shit-hole country’, in which list he presumably includes India. He has been to Afghanistan but only to an American  military base. India will be the first poor nation that he has visited as president and probably the first poor nation he will ever see. It will be interesting  to see what his observations are, especially because he is not shy of saying impolite things.

Trump will be, by my count, the sixth president to formally visit India. The first was Dwight D Eisenhower, a famous World War general, who became president and invented the phrase “military industrial complex”. BBC reported that "nearly every US president on a state visit to India has emulated his itinerary: he laid flowers at Mahatma Gandhi's memorial, took in the splendour of the Taj Mahal, addressed parliament and spoke at Delhi's iconic Ramlila grounds, which, according to one news  report, attracted 10 lakh people.”

An equally warm visit was the one by president Clinton, who came 20 years ago. I remember that visit well, and it was amazing to see the scenes inside Parliament,  where he spoke. One MP, I think it was Ramdas Athavale, currently a minister in the Modi Cabinet, was leaping over the tables to run to Clinton and meet him after the  speech was over.

Clinton had some harsh words for India at the time, related to our nuclear adventurism and tensions with Pakistan. Overall, despite that too being a Hindutva government (under Vajpayee) and Clinton a liberal, the visit went off well. Clinton also briefly visited Pakistan as was the custom at the time, so that  they would not feel bad.

The reverse happened in terms of ideology when George W Bush, from a conservative party, visited when liberal Manmohan Singh was prime minister. That was also a warm  visit but because Bush did not have the charisma of Clinton (very few leaders did and do), it was not as spectacular though in terms of results it was seen by analysts  as good for India, producing the nuclear deal.

Barack Obama has come to India twice, once when Manmohan was PM and then of course when he was served tea by Modi wearing that suit with his name embroidered on it.  Obama is a very middle class man and wears shoes that are frequently resoled. I wonder what he thought of Modi and Indians when the Indian prime minister appeared  before him wearing that suit.

Obama is an intellectual and called Manmohan his guru. Trump and Modi are similar in that sense. Both are men of the people who like addressing rallies, are active on  social media, are egotistical (Modi refers to himself in the third person frequently, while Trump can honestly be described as a proper egomaniac). Both have been  aggressively anti-immigrant. Trump had a ban on Muslims travelling to the US from certain nations and Modi has excluded from from his Citizenship Amendment Act.

Unlike the Clinton and Bush visits, there is no specific reason for Trump to come. He is not even here for Republic Day which is the classic invitation ruse.  He will speak at a rally with Modi in Ahmedabad, visit the Taj and then fly off. There is no trade deal that will be signed. Trump wants India to open its market to  American farmers, which will be difficult for Modi to do. And Modi has made India progressively more protectionist with import duties which makes American goods coming  in through a trade deal more complicated.

India would love to get preferential access to US markets for things like garments exports, but that is not going to happen. In fact in recent weeks America has  removed India from the list of nations that get some differential treatment. Our desire to be seen as a global power, which we are not, has certain consequences.

Indian companies in Bangalore want a more relaxed visa regime, but that is also not going to be possible given Trump’s anti-immigration and especially anti-brown and  black skin values. So what will be the end result of the Trump visit? It will be entertainment for many (though of course not those who have been evicted from their  homes in Ahmedabad) but it will not be historically significant. Trump has no real affection for India or indeed any knowledge of it.

The last thing is that Trump may or may not be president at this time next year. The US elections are in November, and it is possible that we may have a Democrat in  the White House. If that is the case, then not only will we have to write off all the personalised investment in the Trump-Modi chemistry. A Democrat in the White  House will mean greater scrutiny of our actions in Kashmir and over the CAA and National Register controversy. The best thing that Modi can hope for in this visit is  that he is able to mobilise Indians in America to vote Republican and try and help Trump return to power.

(Aakar Patel is a Bengaluru-based author and columnist.)