How Can Opposition Close Ranks Against Modi? By Stitching State-By-State ‘Mahagathbandhans’ 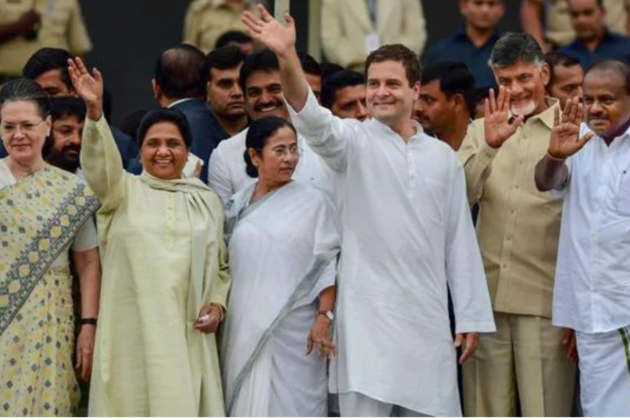 Will they or won’t they? – the question over whether our fractious opposition can ever come together to fight the Narendra Modi-led BJP keeps following me at every social gathering I attend. I have no pretensions of being a political pundit, as many of my fellow journalist-editors in Delhi rightfully are. Unlike them, I do not track every political development with eagle-eyed interest. Nor do I seek to try and understand the hidden nuances behind every twist and turn that constantly enliven our political theatre.

Yet, my professional credentials make many presume that I am privy to inside details. And a majority of those I rub shoulders with expect me to provide them with a perspective that otherwise should be considered privileged information.

Undoubtedly, the question of ‘will they or won't they’ is intriguing. The next general elections are not too many years away and following the reversal that the mighty BJP electoral machine faced in West Bengal recently, speculations over whether the opposition can pull off a similar feat in other states and nationally have assumed added significance. The very idea of a possible encore has me piqued as well.

The future contours of our electoral politics – based on both conversations I have had with several important stakeholders and what I read up of what experts have written – make me believe that it is pregnant with possibilities. A string of states – more than a dozen – will elect new assemblies before India votes again in 2024 to elect a new federal government. Obviously, none in the opposition camp can measure up to the popularity and charisma of Modi and the BJP starts as a clear favourite.

But months and years are a long time in politics and the outcome – however one-sided it may seem to be now – is not a foregone conclusion. True, the Congress, the principal opposition party and the only one with a pan-Indian footprint – is a shadow of its former self with rapidly shrinking influence. It cannot match up to the might of the well-oiled election-ready BJP in every state, having yielded ground to regional formations such as Mamata Banerjee’s TMC in West Bengal or Jagan Reddy’s Andhra Pradesh. But in the event of the disparate opposition groups pulling off a miracle and coming to a clever arrangement, an electoral surprise cannot be dismissively cast away.

Hark back to pre-2004 experience and the splintered opposition can draw solace. It also has lessons for the Congress that it no longer can claim a pre-eminent spot in the opposition camp. Like now, the party was rudderless then. It strung up clever understandings with smaller parties and the result stumped everyone. The Congress ended up with sizeable seats in its kitty, enough to cobble together the UPA that went on to rule the country for the next decade.

Talk of a united opposition seems to stumble currently as conversations invariably start with the anticipated Congress claim of leading the pack. The grand-old party has surrendered much of its clout, having lost election after election. Yet, what the opposition camp can lose sight of at its own peril is that the Congress remains a sizeable force. It cannot be ignored because it still secured some 20 percent of the popular vote, next only to that of BJP’s 37 per cent in the 2019 polls. Others polled much less, and that includes Sharad Pawar’s NCP, Mamata Banerjee’s TMC and Akhilesh Yadav’s Samajwadi Party which together could not cross double digits despite their pretensions of being national parties.

Complexities arise because the piquant spot the Congress finds itself in. It cannot measure up to the BJP on its own and cannot command the same degree of clout in the opposition camp, many of whom are reluctant to accept its leadership. But then the opposition also cannot do without it. For that matter, Congress is the only dominant force capable of taking on BJP in several major states such as Rajasthan, Madhya Pradesh, Chhattisgarh, and Karnataka. So, toppling the BJP without Congress assistance is a tall order.

Putting together a pre-poll opposition alliance – a mahagathbandhan of the erstwhile National Front kind -  with or without a diminished Congress as the glue therefore looks unrealistic. Also, any alliance stitched ahead of the elections would make the opposition camp vulnerable to the charge that they do not have a prime ministerial challenger capable enough to match Modi. The Congress would definitely like to pitch Rahul Gandhi as the choice, but his prospects in a presidential-type poll against Modi appear slender. There certainly are other leaders in the opposition ranks nursing prime ministerial ambitions, but none of them has for now outgrown from being a regional satrap.

A workable way out for the disparate opposition could be to act smart and keep aside for now who would be the prime minister if they succeed in showing the BJP the door. United by their instinct to survive that the BJP threatens, they could arrive at an arrangement under which they accept each other’s dominance in respective states and agree to help in accumulating votes. For example, in states such as Madhya Pradesh and Rajasthan, opposition parties could rally round the dominant Congress, give it the lion's share of seats and help in averting a split in anti-BJP votes. Likewise in Bengal, Mamata could be the fulcrum around which the opposition coalesces. Without any realistic chances, it makes no sense for the Congress or other opposition parties to queer Mamata’s pitch and hand over the advantage to the BJP that it so fervently wants to defeat.

Such piecemeal state-by-state understandings could help in consolidating non-BJP votes and give the opposition a shot at power. Such cleverly crafted partnerships perhaps look improbable now. But they are not impossible either. Look at Tamil Nadu. Every time the southern state has gone into elections, national parties such as the Congress and the BJP have subsumed their interests to what suits the more formidable regional players – the DMK and AIADMK. It means political parties can keep aside their egos when the push comes to a shove. Threatened with being shoved into permanent irrelevance, it is time for the opposition to learn from the Tamil Nadu model perhaps.

POSTSCRIPT: This arrangement also allows the opposition to sidestep for now the insurmountable question of who the prime minister would be if it is to win. They can agree the party with the largest number of seats gets to elect the PM, even if it means Congress and Rahul Gandhi.