There are instances of malicious fabrication by the makers of biopic on Gunjan Saxena in the name of cinematic license and need to be treated with the contempt that they deserve. 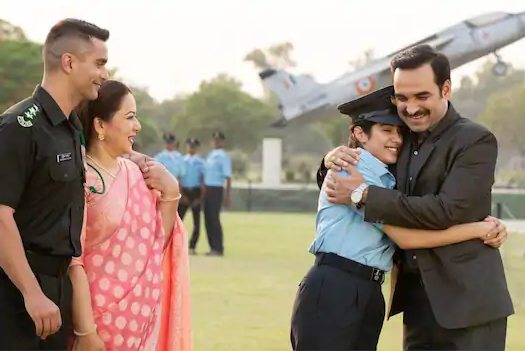 The new biopic on Netflix on former Indian Air Force officer and helicopter pilot Gunjan Saxena does not disappoint. It is as terrible, inaccurate and bad as legion of Bollywood films on the Armed Forces in the past. When one watches technical, military and historical correctness and directorial excellence in recent foreign war movies like Dunkirk, 1917, World on Fire etc. and compares them with movies like Gunjan Saxena: The Kargil War, the contrast is, quite simply, nauseating.

Even if one were to consider that the commercial objectives and the viewers’ expectations of this movie are probably quite different from the seriously researched Hollywood movies, it still does not negate the basic necessity of correctness and honesty of portrayal in the name of creative license. In this case, it is just an excuse for shoddy, puerile work.

While one can still perhaps overlook, to a certain extent, the lack of correct technical inputs on matters of military recruitment and indoctrination processes, what is most disturbing about this film is the way the mindset of the Indian Air Force and its officers has been portrayed. It borders almost on the deliberately malicious as the film incorrectly portrays gender discrimination in one of the finest institutions of our country -- an organisation known for its professionalism and gallantry in war and empathy and unstinting support to the Indian people in times of need, irrespective of caste, creed, religion and gender.

The Indian Air Force and indeed the Armed Forces as a whole, is deeply rooted in traditions of valour, camaraderie, professionalism and supportive nurturing of young officers, not just in professional matters but in social discourse as well, where old-fashioned chivalry and gentlemanliness of a bygone era are still fiercely guarded virtues.

An Armed Forces unit is, first and foremost, a close-knit family and the Commanding Officer is like a father figure. He is often affectionately referred to as ‘the Old Man’, even though he would be no more than in his late thirties or so in most cases. Same would be the case of the mid-level executives called the Flight or Section Commanders who run the day-to-day operations of an Air Force Base. They are all men of great professional competence and unfailing generosity and fairness, without which they would not have made their way up to those positions.

Since military flying and military activity, in general, is a stressful activity and most bases are secluded and away from civil society, the families of the officers and men are also actively associated and involved in the social life of the base. Families come together and support each other not just in the good times during wonderfully lively station and squadron parties, but even more in the tense, testing times of personal anguish, when a unit moves to a battle zone and an aircraft is reported missing, or worse, when a talking, laughing young man or woman comes home in a coffin draped in the tricolour, with his/her Peak cap on top.

None of this enviable ethos of the Armed Forces finds any mention or depiction in this film, probably because the filmmakers who live in a completely different world would not even be aware of such things, and wouldn’t particularly care in their crass commercialisation and ‘only sensationalism sells’ approach to life.

Unfortunately, the movie depicts ugly misogynistic behaviour, the snarling senior officers (even the recruiting officer is shown much in the same light), the scheming younger colleagues who  get sorties cancelled for fear of being upstaged by a woman who would probably start crying in an aircraft emergency, instead of taking appropriate recovery actions -- actions which every pilot is made to memorise and ‘rattle out’ and practice hundreds of times during training, till they become second nature, something that they could do blindfolded or even in their sleep, when faced with a crisis in the air.

And what to say of the complete distortion of reality in the unimaginably obnoxious scenes of interruptions of flight briefings by the Flight Commander and the crude arm-wrestling games in the crew room to prove the so-called ‘weakness’ of women officers. These are instances of malicious fabrication by the film makers, in the name of cinematic license and need to be treated with the contempt that they deserve!

The Indian Air Force decided to induct women officers in the early 90s after a lot of deliberation and planning and by the time the first ‘Lady Officers’ arrived on our bases, all arrangements for a seamless integration were in place, for the most part. Adjustment of mindsets represented the least of the problems, since by training and tradition, the IAF and the Indian Armed Forces as a whole, have had generations of Officers and Gentlemen peopling them and ladies have always been treated with utmost courtesy. At social gatherings, the seniormost officer present in a room will invariably get up, even when the juniormost lady walks in and remains standing until she is seated. In such a society, how can the obnoxious behaviour depicted in this film ever be imaginable?

No quarter or concession was given in terms of professionalism to women officers, and indeed, none was asked for, simply because Military Operations are a matter of life and death and no concessions can be given to anyone, without endangering the lives of an entire group of people. The training imparted at the Air Force and other Military Academies also precluded this, being equally stringent for all Cadets (trainees), male and female. Socially, however, women officers were received with the same kind of courtesy and chivalry when they arrived, as was usually reserved for the families hitherto, even though they were ‘one of the boys,’ so to say.

All this has been grossly misrepresented in the film which shows the males of the entire unit feeling threatened and treating the Lady Officer with resentment and suspicion. Nothing could be further from the truth in reality.

Indeed, the families as I have mentioned earlier, also played a great role in welcoming the women officers into the social fabric of the IAF and making their integration a smooth and seamless process. The best part was the easy camaraderie and respect and the trust people had for each other, because you cannot function in such environments without that. And it provided a great atmosphere, especially for the youngsters to thrive in, that was professional and informal at the same time.

All this has been twisted in an ugly manner in the film and it hurts anyone who ever belonged to this wonderful group of people and wore the blue uniform with pride over the best years of their lives and made lifelong friendships in the process.

If I look back at my own experience of when I reported to my first IAF unit as a raw pilot officer, fresh out of the Air Force Academy on a Friday afternoon and took courage in both hands to call up my Commanding Officer from the Main Guard Room to ask where I should report, how can I ever forget the kindness and warmth with which he asked me to ‘get myself down to the Officers Mess’ since it was almost the weekend and he would meet me there. By the time I actually found my way there, almost all the officers of my unit and some of their ladies had gathered to welcome me, over lunch and a drink, making me feel as if I had always belonged there.

And it was much the same for most young officers, male or female, when they first reported on Posting.

The ‘Boys in Blue’ have always been wonderful professionals, amazing pilots, and above all, great human beings. That’s who they are and will always be, long after third rate sensationalism has been deservedly consigned to the waste bins where they belong and be forgotten. No amount of distortion or misrepresentation can ever dent that image or truth!

(The writer, a retired Wing Commander, served in the Indian Air Force for 24 years and played Ranji Trophy for the Services team. Views are personal.)