The discovery of safe bases built by the terrorists on the Poonch heights over several years points to the lessons we still need to learn. It is silly to blame small Army units. 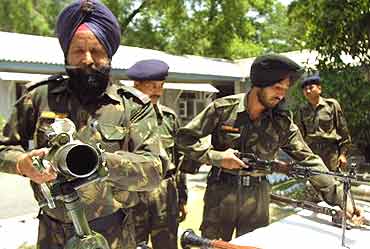 Most afternoons, there is plenty of work at the Foreigners' Graveyard in Surankote, digging graves for the bodies of terrorists killed in the mountains. The small green field behind the Surankote police station used to be the size of a suburban bungalow lawn. It now sprawls over an area of an outsize football field, and threatens to overrun adjoining farms.

The designated burial ground for unidentified terrorists, the graveyard houses the remains of the dozens of jihadis, many from Pakistan and Afghanistan. In the Kashmir valley, graves in what are known as 'martyrs' graveyards' often have elaborately carved headstones. Here, no one seems to care enough to take the trouble.

Talk to local police and military officials about how they find terrorists in this area, the centre of the most bitter fighting in Jammu and Kashmir, and it soon becomes clear it has little to do with special tactics or high-grade intelligence. "All you do is march into those forests", says a trainee at the Surankote Police Station, pointing to the dark shadow, "and, soon enough, you'll be in the middle of a war."

Over the last month, it has become clear that nowhere near enough Indian troops were marching into the mountains of Poonch, and up into the Pir Panjal. Operation Sarp Vinash [Snake Destroyer], a three-division strength operation involving three Army brigades, has thrown up evidence that terrorists on the Poonch heights have been building up safe bases in key areas of the district for several years.

Troops discovered a network of almost a hundred well-defended bunkers around the Hill Kaka bowl in Surankote, built up from the high-altitude Dhoke shelters used by Gujjar herdsmen in the summers. So far, the Army claims to have killed upwards of 62 terrorists in the operation, although not all the bodies of those killed have so far been recovered.

Other diaries record the deaths of comrades in Afghanistan, with one entry recording the death of a terrorist code-named Butshikan, or idol-destroyer, in Osama bin Laden's Tora Bora complex. Interestingly, Indian troops encountered one elaborate cave defence at an altitude of 3,989 metres, which was eventually destroyed with the use of helicopter-fired air-to-ground fragmentation missiles.

Other diaries, interspersed with Islamist slogans attributed to the Afghan warlord Gulbuddin Hekmatyar, show the presence of a crude counter-intelligence apparatus. It records the execution of 10 'spies' whose throats were slit after they allegedly 'betrayed' jihadis to Indian forces between May 1999 and July 2002. The list includes two women and three children.

Such killings of Muslim villagers, mainly from the Gujjar community, are common in Rajouri and Poonch, and have continued through the Sarp Vinash period. Five villagers were shot dead at Keri Khwas, near Rajouri, on March 25, and another six were slaughtered at Kot Dhara, near Darhal. Many of the killings can be traced to wholly non-military origins, pegged around land and resource conflict between Gujjars, Rajput Muslims, and ethnic-Kashmiri migrants.

An elaborate communications structure built around portable satellite phones allowed terrorists to communicate on their handlers with Sialkot, Muzaffarabad, Kotli, Islamabad, Abbotabad, as well as sympathisers across India - calls were made to Uttar Pradesh, Gujarat, Tamil Nadu and Kerala. One photograph recovered from a killed terrorist showed him posing in front of the Parliament House in New Delhi.

Since the satellite phone systems used by the terrorists are of a type which uses a gateway in Pune to transmit signals, it is possible Indian intelligence knew of the signals traffic for some length of time, and was content to allow it to be generated. Elaborate codebooks for radio-frequency communications were also found.

There are lessons to be learned from the fighting on the Pir Panjal. First up, it is necessary to remember that, the Army's own public relations enthusiasm notwithstanding, this is not the first time large-scale operations have been carried out in the region. In July 2001, twenty-one Jaish-e-Mohammad cadre were eliminated in a bunker-busting operation above Surankote.

Many, as investigation later disclosed, were teenagers, tragically press-ganged into the service of jihad. Again, in mid-2002, joint operations by the Jammu and Kashmir Police and Rashtriya Rifles claimed eighteen terrorists in Doda's Wadwan area, in some of the most remote and difficult terrain in all of Jammu and Kashmir. Regular encounters have taken place even in Hill Kaka, where the Army has found such success.

The problem has been that offensives in the high mountains have rarely been well thought through or sustained. Helicopter-borne operations were attempted in Wadwan during the winter of 2000, but the lack of an infantry presence meant that all troops eventually found was one empty Kalashnikov magazine. In 1999, the entire 8 Mountain Division was pumped into Kupwara's Rajwar forests. Again, lacking intelligence support and planning, the grandiose operation, code-named Operation Kaziranga, succeeded in finding just one dead body in its first two weeks.

In the summer of 2000, company-strength pickets were put up in Wadwan, and on the Margan pass into Kishtwar. The mainly defensive positions killed no terrorists, and were burned down when troops withdrew at the onset of winter - sending a clear message to local residents about who was boss.

It is silly to blame small Army units in the mountains for failing to operate aggressively, as the media often does. Consider, for example, the case of Kishtwar. The district of Doda sprawls across 11,678 square kilometres, only a few hundred square kilometres less than the entire Kashmir valley. Over 60 per cent of this area is made up of the single tehsil of Kishtwar, which, in turn, divides equally into four major valley systems.

The northern valley systems of Wadwan and Marwah were protected by just one battalion, and a single company traditionally sent to Wadwan in the summer was pulled out in 2001, enabling a massive escalation in terrorist violence. The offensive operations carried out that year have had no subsequent follow-up - and now, the Nagrota-based 16 Corps is considering a series of Sarp Vinash-style operations in this part of its domain.

Much of the credit for the success in Poonch goes to the new commander of the Romeo Force, Major-General Hardev Lidder. Lidder, sources disclose, was appalled to find that the Romeo Force, charged with counter-terrorist operations in Rajouri and Poonch, just wasn't spending enough time on the heights.

Helicopter pads to supply troops in the mountains, as well as minor roads, were constructed in the winter to improve mobility. Then, without fanfare, troops of the 9 Para-Commando Regiment were tasked to take on a major bunker on Peak 3689-metres in Hill Kaka, after helicopter surveillance flights picked up large numbers of footprints through the snow leading to a single complex. Thirteen terrorists were shot dead in the operation, the largest single success recorded in the course of the ongoing operations.

As terrorists groups scattered into the Pir Panjal, more troops were called in to saturate the ground, and disrupt their movement routes. The 6 Rashtriya Rifles was joined by the 163 Brigade and the 100 Brigade, pulled off duties on a new second counter-infiltration ring along the Line of Control.

The major offensive axis, as the operation evolved, were Thanamandi on the Rajouri-Poonch border, where a welter of killings of civilians had recently taken place, Hari Buddha, Marhot, Hill Kaka, and the Bufliaz forests near Surankote. Troops from the 15 Corps were also pulled in to block routes from Saujian and Loran in northern Poonch, across the Pir Panjal into Tangmarg and Shopian in the Kashmir Valley. It is unclear just how successful these efforts, unlike the initial strike, have been, but large scale terrorists groups have clearly been dislocated and their logistics routes disrupted.

Lidder's most important contribution, perhaps, was to breach the unstated ban the Army has placed on the use of air power in counter-terrorist operations. Apart from the use of air-to-ground missiles, Cheetah helicopters fitted with heavy machine guns were used on several occasions. The use of such weapons was made possible by restrictions on Gujjar herdsmen, which barred them from using traditional high-altitude summer pastures, thus excluding the possibility of civilian casualties.

It seems probable that terrorists will now seek to bring down helicopters, and it will be interesting to see how Indian forces respond to such an escalatory move. Operation Sarp Vinash also used technologies just starting to disperse through the ranks of Indian infantry formations, like portable ground radar and night-vision devices, to considerable effect.

And the problems? For one, large-scale operations like Sarp Vinash can't, very obviously, make up the bread-and-butter of counter-terrorist work. There is no sign, yet, that its lessons about the importance of rapid mobility and technology have adequately dispersed through the Army.

In fact, there is a very real danger that operations that secure media coverage may now be privileged over less flamboyant but equally necessary work. There is also little sign that much-talked-about civilian-military synergies are even being considered. Jammu and Kashmir, for example, has the highest livestock-to-human ratio in India, but is also an importer of milk and meat. A sensible programme of livestock improvement and procurement might do more to keep Gujjars off the high pastures than the arbitrary handouts now being given.

Sadly, no one is even talking about such reform.

Sarp Vinash has shown that innovation, intelligence and enterprise do work. The problem is that this has been repeatedly demonstrated over the past decade: only to be forgotten the morning after.