Scoring at a rate of over four runs an over, Sehwag and Gambhir (85 apiece) take the stuffing out of the South African attack to power the hosts, chasing 510-9 declared, to 185 --their highest opening partnership against the rivals. 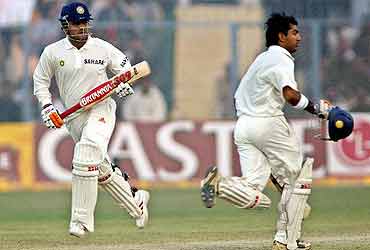 Virender Sehwag and Gautam Gambhir cracked rollicking half centuries as India hit back with a record-breaking opening partnership to restore the balance in the first Test against South Africa today.

The two openers set the Green Park stadium ablaze with their fireworks to propel India to 185 for no loss in response to South Africa's 510 for nine declared on a fog-hit third day.

Gambhir notched up his maiden Test half century and was batting on 85 and Sehwag was giving him company on an equally belligerent 85 at stumps with India trailing by 325 runs.

Play was called off 54 minutes before the revised time of closure due to bad light.

This was India's highest opening partnership since the Multan Test against Pakistan in March-April this year and the first time the opening stand crossed the 50 mark in the last six Tests since then.

The pair erased the previous opening record against South Africa of Vikram Rathore and Nayan Mongia who put on 90 runs at Johannesburg in 1996-97.

The unfinished partnership also took them to the record books as the highest opening partnership at the Green Park which earlier stood in the names of Devang Gandhi and Sadagopan Ramesh who had scored 162 against New Zealand in 1999-2000.

The start of the third day's proceedings was delayed by two hours because of thick fog but Sehwag and Gambhir enthralled the noisy home crowd with some entertaining cricket in the two extended sessions.

Both the Indian openers seemed to be in no discomfort at all on a lifeless track as they blunted the South African pacemen Shaun Pollock and Makhaya Ntini and then plundered runs at will against spinner Robin Peterson who hardly could make an impression.

Sehwag was in fine nick exhibiting his trademark cover drive and was severe on the loose balls while his Gambhir was more circumspect in the initial stages before outpacing his senior partner.

Sehwag opened his account with a boundary off Ntini as he went on the back foot and opened the face of his bat to send the ball to the third man fence.

A classy cover drive off Ntini and a delectable square driven boundary off Pollock stood out as the vociferous home crowd finally got to see some Indian batting after more than two days.

The two openers brought 50 runs on the board in 14.5 overs and then brought about the century partnership in 25.4 overs, maintaning a run rate of more than four runs an over.

South Africa's lone specialist spinner Peterson was introduced into the attack in the 16th over in place of Ntini and very nearly got the prized scalp of Sehwag who stepped out and played all over an innocuous delivery. But young wicketkeeper Thami Tsolekile completely missed the ball and the stumping chance went abegging.

But that was the only anxious moment for the hosts as both Sehwag and Gambhir virtually tore the bowling attack to shreds.

Earlier, Resuming at the overnight score of 459 for seven, South Africa were on the lookout for quick runs when play started after a delay.

The hosts removed overnight batsman Tsolekile (9) in the very second over of the day with vetern leg spinner Anil Kumble trapping him leg before wicket to claim his 430th Test scalp.

Kumble emerged the pick of the Indian bowlers with figures of 6 for 131, claiming his 28th five-wicket haul in Tests.

Peterson, who joined the action after Tsolekile's dismissal, was particularly severe on the Indian spinners to unleash a flurry of strokes to take South Africa's total beyond the 500 mark.

The left-handed Peterson singled out Harbhajan Singh for special treatment as he lifted the off-spinner for a mighty six over long off and then clobbered him for a boundary in the same over.

Pollock also hit some delightful strokes as the visitors made a determined bid to accelerate the pace of scoring.

Peterson played a cameo of 34, which came off just 24 balls, before Harbhajan got rid of him by knocking down his middle stump. His breezy knock contained three boundaries and six.

The total was South Africa's highest ever on Indian soil, erasing the previous record of 479 recorded in Bangalore during the 2000-01 series.