'One Of The Saddest Days Of My Life'

The Speaker finally breaks his silence on his summary expulsion from the CPI(M): 'I feel that I owe a duty to the members, supporters of the CPI(M) and to the citizens of the country to inform them as to how the present situation has come about' 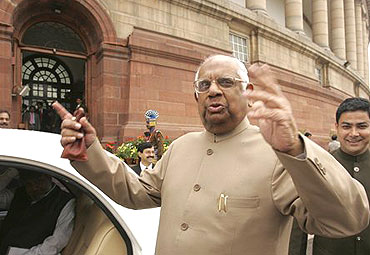 23 July, 2008 has been one of the saddest days of my life, when I was informed through the media of the summary expulsion from my membership of the CPI(M) for 'seriously compromising the position of the Party'. The expulsion has meant cessation of my long association with the Party for nearly 40 years. I recall the day when soon after my election in 1971 to Lok Sabha as an Independent Candidate with the support of the Party, Com. Pramod Dasgupta, one of the builders of the Party, who was the inspiration for all members, asked me to become a Member, which I could not possibly refuse. Then I felt very happy that I had become a Member of the Party.

I gratefully acknowledge the role of the Party for giving me so many opportunities and onerous responsibilities to discharge, and in that I have received guidance, from the Party and the senior leaders and in particular from our great leader Com. Jyoti Basu, who has always given me unstinted support and encouragement.

In the present circumstances, I feel that I owe a duty to the members, supporters of the CPI(M) and to the citizens of the country to inform them as to how the present situation has come about.

After the general election in May 2004 something extraordinary happened, which is now a record in the annals of Lok Sabha. There were 18 nomination papers proposing my name for election as Speaker, filed by the UPA Parties and their allies as also by the main Opposition Party and the NDA constituents, who filed separate nomination papers in favour of my candidature.

On my election on 4 June, 2004, it was emphasized by leaders of different political parties in Lok Sabha that I had been nominated and supported by all parties and that I was indeed the unanimous choice as the Speaker of the House.

Thus my election to the high office of the Speaker was not only uncontested but was unanimous as all political parties proposed my name. On the date of my election on 4 June, 2004 in answer to the kind observations made by the leaders of different political parties, I had observed as follows:

'I shall discharge my functions entrusted to this office more as a duty rather than as an authority. The non-party character of the office of the Speaker in our parliamentary polity places on me a special obligation to be totally non-partisan and judicious while regulating the proceedings of the House. So long as I occupy this exalted Chair, I assure you that I shall always strive to protect to the best of my ability the rights and privileges of the House and of its Members irrespective of their political affiliations' (which I have always sincerely tried to do)

I have said on many occasions that I have no matter or issue of my own, except to see that the House runs according to the Constitution and its Rules of Procedure and Conventions, to which only, l owed and owe allegiance so long as I remain the Speaker.

On 6 July 2008 when the General Secretary of the Party met me to explain generally the Party's stand on the issue of the Nuclear Deal, I was informed that Party had not even discussed any matter concerning me. On the morning of 9 July 2008 the General Secretary telephonically conveyed that a section of the Party felt that my continuance as Speaker may be untenable, however, it was stated that the final decision would be taken by me.

On 9 July 2008, I was surprised to learn from the media that my name was mentioned in the communication to the Hon'ble Rashtrapatiji, without any intimation to or discussion with me. Till today, I have not seen nor has been shown any copy of the communication sent by the Party to the Rashtrapatiji. Significantly after the leaders of different Left Parties met the Hon'ble Rashtrapatiji, at the press conference that was held, the General Secretary of CPI(M) categorically reiterated that it was for the Speaker himself to decide his course of action.

In the computation of the strength of either the ruling party or its allies or of the Opposition, no responsible person or authority can treat the Speaker as belonging to or extending support either to the Government or its allies or to the Opposition. Thus the question of the Speaker withdrawing support to the Government can never arise. It is only the House as a whole which can decide whether the Speaker should continue to remain as such or not, apart from his / her own decision to relinquish, if there is any such occasion.

It was made clear through a statement issued on my behalf on 10 July, 2008 that as Speaker I did not represent any political party in the discharge of my duties and functions nor l owed any allegiance to any political party and that my election was not only uncontested but was also unanimous and that I was not elected as the nominee of any Party. The media was requested not to drag the highest legislative office of the country into controversy by speculative reports and undeserved innuendoes.

'A lot of speculation is going on in the media regarding the position of the Speaker of the Lok Sabha, Comrade Somnath Chatterjee. I have already stated that any decision will be taken by the Speaker himself. This has been reiterated by the Speaker through a statement by his office on July 10, 2008. We do not want the office of the Speaker being dragged into any unnecessary controversy. '

At a press conference held on 17 July, 2008 the General Secretary of the Party had observed as follows:

'On the day we withdrew support from the UPA government, I had stated in a press conference that it is for the Speaker to take a decision on the matter. I have maintained this all through. As for the role of the Speaker, I wish to make our party's views clear. By holding the post of the Speaker, a person does not cease to have polittcal affiliations. But when someone becomes a Speaker, he/she should not indulge in party activities, or adopt partisan political positions.' It is assumed that on that basis no whip was issued to me, as in fact, it could not be.

In spite of repeated and clearest announcements by the General Secretary of the CPI(M) that it was wholly left to me as Speaker to decide my course of action, unfortunately there were continuing speculations about my possible resignation from the Office of Speaker.

In the afternoon of 20 July, 2008, for the first time I was verbally told by a member of the Politburo that it was the decision of the Party that I should resign and vote against the Motion and when I refused, subsequently it was suggested that I should resign as Speaker and may not attend the House to cast my vote. I informed him of my inability to accept such decision or to act upon the same, as it will seriously compromise the constitutional position of the Speaker. The Party should have appreciated that as Speaker I did not represent it nor could it at all give any direction to me with regard to the discharge of my functions as Speaker. I reiterate this with all the emphasis at my command.

During my nearly 4 decades in Parliament, I have tried my best to discharge my functions true to our Parliamentary traditions. With that experience and opportunity to serve the country as a Member of Parliament, which is the highest Constitutional Forum chosen by the people for the purposes enshrined in our Constitution, I could not and cannot in my conscience accept a position, which would totally compromise the sanctity of the most important legislative office in the country. After weighing the pros and cons, I have consciously taken the principled decision to uphold the Constitution of India at the risk of being unjustifiably dubbed as anti-party.

It is a canard to allege that I have done so to help any party or parties or on some other personal considerations. I strongly and categorically deny these wholly baseless allegations.

Long before the present controversy had arisen, I had declared openly my intention not to contest any further election and to devote the remaining period of my life in the service of the people.

In view of the controversies that are now being raised based on a Party's contention that while as Speaker, a Member of Parliament should continue to be under the direction and control of the Party, a convention should start now that during his/her tenure as Speaker, a Member should temporarily resign from the membership of the Party and not face a situation which compromises the position of the Speaker vis-a-vis his or her Party.

I wish to express my sincere thanks and gratitude for the overwhelming support from the people from different parts of the country and abroad, who have sent messages supporting the stand taken by me based on the Constitutional position. Such responses, which I find unprecedented, emphasize the people's desire that the Parliament should function properly and discharge its role in serious and responsible manner and give me renewed strength to continue to fulfil my obligations and responsibilities as the Speaker during my tenure.