Home  »  Website  »  National  »  On The Jogi Trail
Shame In Chhatisgarh

On The Jogi Trail

Piecing together the sequence of events, from the day the results were announced to the press conference where the tape was played. 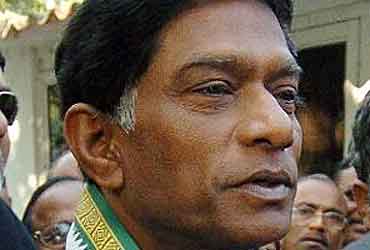 On December 4, after the poll result was known, Jogi had appeared to have accepted his role as an opposition leader. Usual homilies about accepting the verdict of the people were mouthed.

But by December 5, when it seemed that the BJP was going to adopt a non-tribal as the chief-minister, calculations seem to have changed. Recently defected-from BJP, Lok Sabha member P.R. Khunte, was apparently used to get in touch with Virendra Pandey, who happens to be a friend of Baliram Kashyap, a tribal BJP Lok Sabha member from Bastar.

The same evening, Khunte was on the phone to Pandey, suggesting that Kashyap could become the CM with the support of the Congress (36 MLAs), the BSP (2 MLAs) and the NCP (1 MLA).

Now it is not clear whether or not Khunte and Pandey had been in it together, but the version which seems to be widely accepted so far is that Pandey pretended to bite the bait, listed his conditions, including a vast sum of money. He was told that Jogi would call him the next day.

December 6: Pandey taped his conversations with Jogi and Khunte. (see excerpts above). The amounts to be paid for the "purchase" are decided.

In the meanwhile,  Pandey has briefed DPM Advani, law minister Jaitley and Pramod Mahajan in Delhi. Arun Jaitley is rushed to Raipur. Kashyap, in the interim informs Jogi that he would reach Raipur by  evening and that he should go ahead with the arrangement with Pandey.

Pandey meanwhile has prepared a hotel with a spycam, but keeping the recent Judeo case in mind, Jogi refuses. By 8:15 p.m. Pandey is told to go near Radiant Public School, 20 km or so from Raipur. Why Jogi doesn't suspect wiring or spycam on person is perhaps best explained as bravado or a reasonable gamble.

Meanwhile, two TV channels had been tipped off and their correspondents and photographers rushed to capture it all for some candid camera shots. Apparently, they were not told what they were "going to get".

The details are unclear but apparently, as the version goes, on the way to the rendezvous point,  Jogi spotted some "unusual" movements along his route and sped away. Because of which the television cameras could only get shots of some speeding cars and with all the excitement happening, the reporters could realise only late in the evening what they had "actually missed".

Anyway, Jogi and his son Amit travelled in a numberless Tata Safari, driven by Amit  and Jogi in the back seat. The Jogis ask Kashyap and Pandey to climb into their vehicle, assures them that all their conditions -- including the money demand --  will be met. Amit reportedly chimes in to fix a price tag of Rs 25 lakh for each defecting MLA.

A car following them is signaled to a stop. Amit's friend in that car hands over a bag with Rs 25 lakhs in it to the BJP duo. The letter of support is handed over too.

By around 10:30 p.m., Jaitley and  senior state BJP leaders are having the press-conference of their lives, announcing the whole sordid saga.

Wags are already saying how only a DVD scam is left to hit the headlines. Imagine, some of this could have been on video too! Judeo must be giving his moustache yet another twirl.