While Manmohan Singh's critics, in India, charge him with having got promises for commitments, in the USA, Bush's critics feel that Bush has agreed to give India virtual membership in the club of recognized nuclear-weapons states created by the NPT. 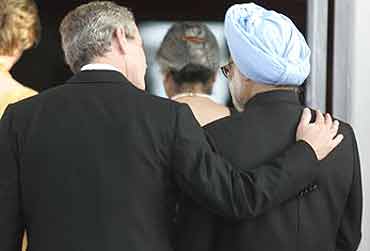 Prime Minister Manmohan Singh received a warm (indeed, as it happened, sweltering) welcome on the South Lawn of the White House, a rare banquet (the equivalent of a state dinner), presidential hospitality for the Indian CEOs who were part of Indian official entourage, a reaffirmation of the two countries' determination to fight terrorism together, and a raft of agreements that should improve the climate for commercial cooperation.

However, the headline outcome of the Manmohan Singh visit was not good news for a cause to which both his government and the United States are sincerely committed: nuclear nonproliferation. President Bush agreed to give India virtual membership in the club of recognized nuclear-weapons states created by the Nuclear Nonproliferation Treaty.

The NPT dates back to 1968, when five states had tested nuclear weapons: Britain, China, France, Russia (then the Soviet Union), and the US. The treaty was a deal between them and the rest of the world; the "haves" would, over time, negotiate the reduction and eventual elimination of their nuclear arsenals (The latter goal was a blue-sky dream that has never been seriously pursued.), and the "have-nots" would refrain from acquiring nukes in exchange for financial and technical assistance in developing peaceful uses of nuclear energy.

By conducting an underground test that caught the world by surprise in May 1998, India put itself unambiguously and irreversibly outside the bounds of the treaty. Pakistan, which quickly followed suit, is in a similar category. So is Israel, which is universally assumed to have nukes – even though it hasn't acknowledged ever testing one – while North Korea is believed to have at least a couple of bombs, if not more.

The joint statement that President Bush and Prime Minister Manmohan Singh released on July 18 affirms that India has demonstrated a commitment to using its growing power responsibly. There is little doubt on that score. Unlike Pakistan, which has been called the Wal-Mart of illicit commerce in dangerous technology, India has been careful not to let its nuclear material and know-how fall into the wrong hands.

The Indians have also long claimed that the NPT unfairly grandfathered China, India's rival and sometimes-adversary, into the nuclear club while keeping India itself out on the grounds that it had not tested a weapon when the treaty was completed. Not only does the Bush administration accept that logic – so did the Clinton administration. That was why, rather than insisting that India join the NPT as a non-nuclear-weapon state, the US has, for much of the past seven years, tried to work out a genuine compromise. Such an agreement would give India more access to technology necessary for its civilian nuclear energy program in exchange for meaningful constraints on its weapons program, consistent with its own declared policy of wanting to have only a "credible minimum deterrent."

By all indications, the Bush administration last week gave up on that tradeoff and granted India the privileges of a NPT member with very little in return.

In one important respect, the Indians have received more leniency than the five established nuclear "haves" have asked for themselves: The US, Britain, France, Russia, and China say they have halted the production of the fissile material that goes into nuclear bombs, while India has only promised to join a universal ban that would include Pakistan – if such a thing ever materializes. Yet that pledge, in the future conditional tense, was apparently enough for the Bush administration.

Since the president came into office four years ago, he made clear in word and deed that he did not share his predecessors' confidence in international treaties and institutions. In addition to putting the kibosh on the International Criminal Court and the Kyoto Protocol on climate change, he pulled the US out of the Anti-Ballistic Missile Treaty, significantly weakened the strategic arms reduction process, suspended or halted a variety of other arms-control and nonproliferation agreements, and associated himself with the Republican refusal in the Senate to ratify the Comprehensive Test Ban Treaty. Hints continue to come from the Pentagon and elsewhere that the US may proceed with a new generation of nuclear weapons that will, its advocates say, require a resumption of American testing.

No wonder the NPT – originally an American idea that depends on unstinting American support – is in jeopardy. And no wonder the world has been watching warily to see how the US handles India and other outliers of the NPT.

The short answer is: selectively and unilaterally, without much regard for rules that apply to everyone.

India and the United States have both shown a penchant for going it alone – India in defying the international community (including the US) with its tests, the Bush administration in attacking Iraq over the objections of the United Nations and many of its own closest allies. If the Indian and American versions of unilateralism reinforce one other, it will work to the detriment of institutions like the United Nations and risk turning treaties like the NPT from imperfect but useful mechanisms into increasingly ineffectual ones.

The administration – taking its lead from the president himself – tends to see the world in black-and-white, good-versus-evil terms. That view has translated into a nonproliferation policy that cuts extra slack for "good" countries, like India, while cracking down on "bad" ones – in other words, rogue states like North Korea and Iran.

But the world is full of countries – many of them, like India, certifiably "good" ones – that have, for decades, stuck with the original NPT deal and forgone the nuclear option. Quite a few did so even though they had the technological capability and what they regarded as the geopolitical pretext for doing otherwise: Brazil, Japan, South Africa, and South Korea, to name just a few.

Seeing the outcome of Singh's visit to Washington, some – perhaps many – of those nuclear have-nots will be more inclined to regard the NPT as an anachronism, reconsider their self-restraint, and be tempted by the precedent that India has successfully established and that now, in effect, has an American blessing.

It is in that context that what both the Indian and American governments hailed as a breakthrough in relations between the two countries is a step toward a breakdown in the international nonproliferation regime.

There is also an important though officially muted – sometimes denied – anti-Chinese subtext to what happened when Mr. Singh came to Washington. By the Bush standard, China, as the world's largest non-democracy, is a long way from proving itself to be on the right side of the good-versus-evil dividing line. US Secretary of State Condoleezza Rice is on record, in an article she wrote in Foreign Affairs during the 2000 presidential campaign, with the argument that the US should regard India as a strategic counterweight to China. That consideration, which dropped out of administration rhetoric after 9/11, is making a bit of comeback in official Washington. It no doubt further inclined the administration to accede to India's aspirations not just for special treatment in general, but for special treatment under the NPT.

All this does not negate the positive accomplishments of the summit in the spheres of trade, economics, and counterterrorism. But it means that while President Bush and Prime Minister Singh advanced the goal of making the US and India into "natural allies," they and their successors will, as a result of the short-sighted nuclear deal, face a more dangerous world.

Strobe Talbott is the president of the Brookings Institution. As deputy secretary of state, he was President Clinton's special envoy for South Asia after the Indian and Pakistani tests in 1998. He is the author of Engaging India: Diplomacy, Democracy and the Bomb (Brookings Institution Press). This article appeared in YaleGlobal Online, a publication of the Yale Center for the Study of Globalization, and is reprinted by permission. Copyright © 2005 Yale Center for the Study of Globalization.