No Respite For India From Abbas

Two brilliant strikes by the ace penalty corner expert authors Pakistan's fluent 3-1 victory. In the process, he joins Dutchman Paul Litjens for the maximum number of goals with a tally of 267. 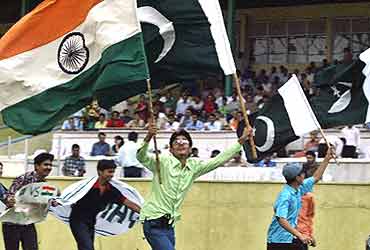 Sohail Abbas equalled the world record for the highest number of goals with two brilliant strikes as Pakistan scored a fluent 3-1 victory against India to widen their lead in the eight-match hockey series today.

Pakistan, who were leading 2-1 after four matches in the first leg at home, extended their lead to 3-1 as India failed to keep up their good work.

Ace drag flicker Abbas equalled Dutchman Paul Litjens' tally of 267 with goals from a penalty corner and a stroke to give the visitors an easy win in the eventful match before a small crowd of 7,000 at the Capital's National Stadium.

India suffered a blow when captain Dilip Tirkey was rendered doubtful for the remaining matches after he was felled by a Abbas hit that struck the defender on the face in the 64th minute. Tirkey had to leave the field and is now undergoing treatment in hospital.

India's chief coach Gerhard Rach also had to seek first aid during the match after suffering dehydration. The German was administered sugar treatment during half-time by team doctor Joginder Singh.

On the field, it was a below par showing by the Indians as they failed to take advantage of the home conditions. They were far from impressive for most part of the match and paid the penalty for missing numerous chances.

Pakistan took a 2-0 lead by half time, Kashif Jawaad scoring in the sixth minute and Abbas slamming home from the third penalty corner that the side earned in the 29th minute.

India raised hopes of a comeback when Sandeep Michael deflected in from a free-hit taken by Dilip Tirkey in the 50th minute.

But the hosts failed to capitalise on the chances that came their way. They perhaps missed Gagan Ajit Singh, who is out of the series due to a hamstring injury, as the forward is one such player who has the ability to score from sudden moves.

India's golden chance of equalising was wasted when Hari Prasad failed to collect a fine cross from the left off Vikram Pillay in the first half. Soon after, Prasad created a similar move but no Indian was at hand to deflect it in.

"The results could have been different had we scored from those chances," assistant coach Jagbir Singh said.

"You can't win matches by missing easy scoring opportunities. When the score was 2-1, a goal from us could have given an entire different result."

Pakistan, on the other hand, took time to settle down before stepping on the gas. They made repeated attacks on the Indian post which resulted in one field goal early on and five penalty corners and a stroke.

Some smart work by Indian goalkeeper Adrian D'Souza stopped Abbas from scoring more than two goals in the match, thus making the crack penalty corner expert wait till Chandigarh, the venue of the next Test, to break Litjens' record.

"I am ready to wait. It's very important for us to win and I am happy that I scored two goals. I don't mind that I could not break the record today. As long as it comes against India in this series, it's okay," Abbas said.

The win must have eased a lot of pressure on the Pakistanis, who are now sitting pretty although three more matches are still to go in the series. A win in Chandigarh would ensure Pakistan's continued domination of the bilateral series that was first played in 1978.

Of the eight series played by the two sides so far, Pakistan have won five and India just two with one ending in draw.

"We are happy to start the Indian leg on a winning note. Now we would be under less pressure as a win in one of the three matches is enough to see us through," Pakistan captain Waseem Ahmed said.

Pakistan could not have asked for a better start in India as the team regained their rhythm, lacking somewhat back home, and played as a unit. They used both the flanks to perfection to unsettle the Indians and tested the opposition defence with some fine moves.

The humid conditions and partisan crowd failed to deter the visitors from taking a firm control of the match in the first half itself.

As for the Indian supporters, it turned out to be a big disappointment since they had hoped to see their team triumph in the Capital which was hosting the arch-rivals for the first time in five years.