No Public Discussion With Musharraf

'I don't want to indulge in a public discussion with President Musharraf . I look forward to meeting him and we will discuss several issues in the limited time that will be available to us' 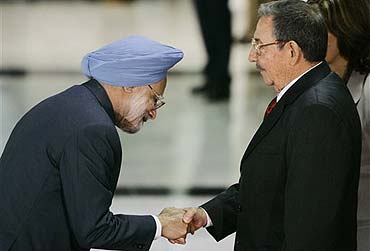 PM’s onboard Press Conference enroute to Havana on September 14

The last two days have been a very rewarding experience for me. The journey to Brazil for me was a voyage of discovery. Brazil has always fascinated me—I have some idea of some of the development issues that face Brazil—that there was an immense scope for providing multi-faceted relationship with the largest economy of Latin America. This was something not so evident to me until I interacted with the Brazilian leadership and particularly President Lula D’Silva . I found an ardent desire among the Brazilian government—President Lula included, as well as the elements of civil society that I was able to interact with—to get to know India more intimately and to use all avenues of promoting economic, political, cultural links between our two countries.

The outcome of the bi-lateral summit has been summed up in the declaration that we issued and all of you are familiar with it. All I can say is that Brazil is the locomotive economy of Latin America, acting together with some other powerful economies in the region- there is an immense developmental potential- India is also on the move and therefore, there are new areas of complimentarity—trade-cooperation in the field of agriculture, agricultural research in particular, cooperation in the field of science and technology, cooperation in the field of joint ventures and the promotion of energy security- particularly in the field of bio-fuels and bio-gas in giving us more options to managing our energy security. Our trade in the last three years has grown enormously and we all agree that there is immense potential. But there are problems of connectivity, in air and in maritime transport.

These are some of the issues we have talked. We all agreed that there is immense scope for cooperation in pharmaceuticals, combining our research and development capabilities to develop new medicines, new vaccines, focusing on such critical issues as HIV AIDS, malaria, and TB. I am happy that I had this opportunity to come to Brazil, the amount of goodwill and affection that exists for India is something to be seen to be believed.

Yesterday, we launched the summit of the three democracies in three continents. Brazil, South Africa are trying to achieve their economic and social salvation in the framework of an open economy and an open society, committed to democratic values. And it came out very clearly that we have a lot to learn from each other. I have often said that the countries of the South know a great deal about the countries of the North. The countries of the North know a great deal about countries of the South. The countries of the South however do not know about each other’s problems, about each other’s possibilities for cooperation. And all the three economies have immense potential and we have identified important areas for the tri-lateral cooperation between our three countries. We will help to widen our developmental options. Energy security is a key element which figured both in our bi-lateral discussions and tri-lateral discussions. I also raised the issues of international terrorism and the need for the three countries to pool their knowledge, wisdom and intelligence to tackle the problem—to which there was a willing response.

I had also good discussions at the tri-lateral meetings on promotion of cooperation in field of civilian nuclear cooperation. It was agreed that subject to appropriate safeguards in the international atomic energy agency framework we would cooperate in the field of civilian nuclear energy. This is also an area which should be pushed forward. Trade between the three countries is growing handsomely—and we all agreed that we should expand the options- India- MERCUSOR, India - South Africa Customs Union (SACU). We will explore the possibilities of how SACU and MERCUSOR, which includes many other economies of Latin America, and India can bring about a trade arrangement to expand trade and investment opportunities between our two countries.

I am going to South Africa later this month to participate in the 100th anniversary of the launching of the Satyagraha by the father of our nation. That will be another major opportunity to interact with the leadership of South Africa.

I am convinced that both President Lula and President Mbeki are tried and tested friends of our country. This augurs well for the growth of cooperation between our two countries—IBSA has already caught the imagination of observers from other regions. The practical and pragmatic approaches that we discussed in the summit for South- South cooperation among these 3 locomotive economies of the three continents.

I have summarized the essence—you have the speeches and also the joint declaration and communiqué. The important thing was that we brought together a powerful team of business leaders from all the three countries and also greatly encouraged – I am somewhat surprised by the enthusiasm of the business leaders in India—possibilities of joint ventures, investment in pharmaceuticals, agriculture, food processing and in energy. Some concrete steps have already been taken—our ONGC Videsh has already started, it has acquired a stake in Petrobras—similarly the Brazilian counterpart is also exploring the possibility of investment in India. So people to people, business to business contact in some ways are far more important than govt contacts. We, three leaders, have pledged to build an hospitable climate for promoting unstinted cooperation between our three countries.

Message for NAM
As I said on my outward journey Non-Alignment is a state of mind—to think independently about our options to widen our developmental choices and in that sense Non-Alignment is as relevant today as it was before. Soon after the end of the cold war, there was lot of complacence in the western world that we have reached the end of history, that capitalism had proved its superiority. And now we find a new anxiety in the world, how to deal with the problem of terror, the role of the non-state actors. The future of humanity is being increasingly questioned and people are talking about a clash of civilizations, people have also been talking of evil empires. So I do believe that cold war may have ended—that Non-Alignment countries representing all the regions of the world—116 countries—I think they can help and make a constructive contribution to building a new world order free from fear, war, want and poverty. And that’s my message, if I can call it a message, NAM must live up to its new potential in the highly uncertain , insecure world that we live in.

NAM draft resolution on Iran
I haven’t seen the draft resolution. I have stated a number of occasions that Iran is a signatory to the NPT therefore Iran must have all the rights that go with being a member of the NPT and it must also fulfill all obligations . And if there are doubts about Iran’s nuclear programme those doubts should be resolved through dialogue, through discussion rather than exercise of coercive action.

On bilaterals in Havana
Several meetings are being tied up and as of now I do not have any firm details. But once we are in the same hall I think we could have several opportunities to meet. As of now I don’t have a complete list of the leaders I will be meeting.

Comments on Axis of evil quote by a foreign minister
Well I don’t want to comment. It is not proper for me to react to some casual remarks made. I think the time has come not to divide the world further but to adopt approaches which would reduce the tensions that threaten to destroy our civilization as a whole.

Agenda for Musharraf talks
All issues relating to the control of terrorism will figure in our discussions. I am meeting him on the sidelines of the NAM Conference, so I will have limited time and President Musharraf will also have limited time. So I don’t promise you I am going to discuss each and every problem around. But we are conscious of our own responsibilities in safeguarding our sensitive installations and I believe there are also arrangements— India and Pakistan exchange data about their nuclear installations. Therefore we both recognize that this is a sensitive matter and there is an obligation to work together

Comment on President Musharraf’s statement
Well I don’t want to indulge in a public discussion with President Musharraf . I look forward to meeting him and we will discuss several issues in the limited time that will be available to us.

When are you meeting Musharraf ?
On the 16th .

On Musharraf meet
This is too early to say. As I said it is a meeting on the sidelines of the NAM conference. We will see how it specifically proceeds.

New Foreign Minister
Well I stand by what I said earlier and that’s enough for the time being.