And Two In 2003? But most likely, since Mammon and markets rule more than the planetary positions, we'd end up with three Pujas in 13 months -- between October 2002 and October 2003! 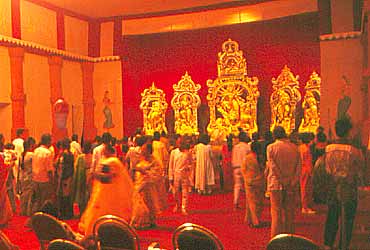 If the Goddess isn't willing, then human ingenuity will have to find a way out. As millions of Bengalis wake up to the awful truth that there are no astrologically auspicious dates for Durga Puja in 2002, pundits are already scampering to figure out a loophole in the calculations and make sure the annual slaying of the Mahishasura is not postponed beyond October 2002.

The inauspicious period of mol mash (or sradh, as it is known in the Hindi belt), supposed to be only a month long, will extend to more than four months next year. "The planetary positions clearly show that the heavens will be dominated by the demons at this time and the gods will lose their status. According to the Puranas, Durga Puja is celebrated to herald the victory of the gods over the demons. The fact that mol mash will be three months longer reflects the demons' supremacy in heaven," says his divine grace Acharya Tirtha Goswami Maharaj.

So, Durga Puja for the Bengali year 1409 should be held not in the usual months of Ashwin or Kartik, but only in the ninth month of the year, Pausa. Which means that the Gregorian calendar year of 2002 will see no Puja! 2003, on the other hand, will host two Pujas, one in January, another in customary autumn.

This has happened twice before in the last 300 years, and it's not known if anyone complained. But this time around, in the 21st century, with the Pujas increasingly becoming more of social events than religious, with huge economic interests involved, everyone, from local puja organisers to apparel marketers are aghast. Conservative estimates peg the Bengali celebration as a Rs 1,500-crore market.

The 2001 Pujas, too, were hit with an unusual problem. According to the almanacs, the right dates for the Pujas fell only a month after Mahalaya, which normally kicks off Devi Paksha -- the Devi's Fortnight (Navratri in other parts of India), six days before the beginning of Puja. But, public sentiment decreed a deviation from the norms.

For six decades, Bengalis have woken up before cock's crow on Mahalaya day to listen to the All India Radio (AIR) Mahalaya programme. So, this year, AIR broadcast the programme twice, first on the actual Mahalaya day, and then again six days before the Pujas, which was not Mahalaya by any calculation.

The debate on the 2002 Pujas can only grow more heated in the coming months. Says Arijit Roy Chowdhury, a director of Gupta Press annual religious almanac: "These reports that there are no Puja days in 2002 are baseless. We have already published a calendar that shows that Puja will start on October 12."

Conservatives refute this vehemently. "How can you worship during a time which is considered inauspicious?" asks Goswami.Goswami feels the liberals' move to host the festivities in October is driven more by economic reasons. He cites the example of the Karwa Chauth festival this year in north India where priests -- because of certain inauspicious planetary positions and timings -- urged devotees to worship Parvati before performing the actual rituals.

"So, people have already started finding ways and means to circumvent the rules and norms. And Durga Puja is not a one-day affair but a big festival. It actually starts India's festive season (read purchasing spree). Not many, therefore, will like it to be pushed back by three months."

Agrees Delhi-based astrologer Indranil Mitra: "The right dates are very important for such ceremonies. And if the dates are missing, what you will have is celebrations and not religious ceremonies. The sanctity will be missing. The pujas you will do in October will be meaningless."

"Everyone's opinions will differ," says astrologer Bejan Daruwalla, "but if the planetary positions are not auspicious, you should pray to Ganesha and have a big yagna to propitiate the powers before starting any festivities."

Of course, if it is Mammon and markets which are dictating that the Durga Pujas be held in October 2002, regardless of planetary positions, maybe then the same forces will ensure that there's one more Puja in January 2003?