'Nithari Is Not An Isolated Incident'

So says the first and highest ranking woman police officer of the country, pointing out that such incidents cannot be stopped till the time police reforms, as directed by the Supreme Court recently, are implemented.

More from Nagendar Sharma
View All 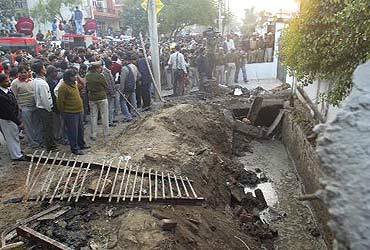 POLICING
'Nithari Is Not An Isolated Incident'
So says the first and highest ranking woman police officer of the country, pointing out that such incidents cannot be stopped till the time police reforms, as directed by the Supreme Court recently, are implemented.

Nagendar Sharma: Can the people of the country expect that the Nithari incident would prove to be an eye-opener for the Police department?

Kiran Bedi: We can only hope that such an incident should serve as an eye opener, but let us all not forget that it is easier said than done. Police in India does not function independently. It serves its masters. The crude reality to be kept in mind is that their masters are not the poor people of the country. We should also not forget that Executive has been called one of the pillars of democracy, but in practice in this country it is run by the whims and fancies of the Legislature. Therefore the question that I would pose to the country is: Who would come forward to take the responsibility of opening the eyes of the police?

Nagendar Sharma: Having spent more than three decades in the police department, what or where according to you is the the root of the problem?

Kiran Bedi: The root of the problem is that policing in India is not for the common man. Policing in India has unfortunately been reduced to providing force for VIP security and for traffic regulations. For the common man, the police force throughout the country continues to be inadequate. Look at the figures of crime rate even in NOIDA where the latest incident has taken place and compare it with the police force available for 24 hours patrolling.

Arshad Ali (father of one of the Nithari victims) : My 14 year old daughter is missing since 2005. I have been to the police station many times, I have pleaded with them, but I have not got any answer. How can the police give an answer when my child is not alive? I have not been allowed to enter the house of the accused. Where should I go?

Kiran Bedi: Well, the Nithari incident has exposed the inherent flaws in our police functioning— for the first time all of you are seeing the inefficiency of the police. This has been made possible by the tremendous visual impact of this heart-rending incident, which has been seen by the people of the country through TV visuals, newspaper photographs and also the radio coverage. Nithari has shown that even at a stone's throw distance from the national capital, the police does not have the resources to maintain law and order. It is a harsh fact that NOIDA police did not even have the means to register the complaints of all of the parents, leave alone what they could have investigated. This is the reality and till the time police reforms, as directed by the Supreme Court recently, are implemented, such incidents cannot be stopped. I am sorry to say this.

Listener from Hyderabad: Madam, in our country it is very difficult for the common man to get an FIR registered in a police station. This gives a feeling that policing is still a legacy of the British Raj in India. The common man does not get to interact with the IPS officers, therefore should there not be special training for the lower-rung police personnel?

Kiran Bedi: Well, the constabulary and lower ranking police personnel come from lower middle class backgrounds and it is not that they are not aware of the problems of common man or that they are insensitive from recruitment onwards. It is the general atmosphere which turns them insensitive. Transfers, promotions and the urge for medals is the reason behind their so-called insensitivity. Can the common man give them these? The obvious answer is NO, therefore they start serving the interests of those who can give them all these benefits. Let us remember that police is being controlled by political masters and influenced by the rich. Since their masters are someone else, how can they be faulted for having an indifferent attitude towards the poor?

This is the general trend. You may still find exceptions who would be sensitive, but it is a reality that sensitivity is missing in general. Therefore till the time mindsets of the police personnel are changed, nothing can be done. The mindsets can only be changed if you empower the common man and that would happen only if reforms as directed by Supreme Court are implemented, which clearly say that transfers, postings and promotions should be done on recommendations of the security commissions. Such commissions would include the chief minister, leader of the opposition, and independent eminent citizens and all of them would take a decision. Similarly, at the central level, it is proposed that this commission would comprise of the home minister, leader of the opposition and independent eminent citizens. If the security commissions are formed and they work, we would definitely see a positive change.

Sanjo Devi (mother of a missing girl from Nithari) : Madam, I went to the police many times and I was rudely turned away each time. I have spent more than fifty thousand rupees in search of my daughter, neglected other two children in search of my first child and police finally told me to go and find my daughter myself. What can I do?

Kiran Bedi: I fully understand the pain of this mother, and the answer given by the police was a standard answer that anyone would get when you go to lodge a complaint for missing people. The question is: Did we prepare a police force in the country which could be humane and sensitive enough to such situations? Nithari is not an isolated incident, but an example of how police generally deals with the complaints of disappearance. The important thing about this case is it has unmasked the police functioning in the country. The fact is that development, which means setting up multi storey buildings etc, is the priority of governments today. Even if we were to wake up and demand for more police force today, it would take at least three years to provide trained police personnel. It is clear the providing adequate police force is not on the priority list of governments in India. For recruiting and quality training, you need resources, which the governments in India are not ready to provide.

Nagendar Sharma: In the existing police set-up, do you think a Nithari type incident could have been avoided?

Kiran Bedi: Nithari is a clear-cut case of supervision failure by police officers from station house officer (SHO) upwards. The concerned officers failed in analysing the reason for disappearance of children, despite repeated pleas from concerned parents. This failure led to a crime of unimaginable proportions. There is no doubt that responsible police officers should have been alert, which was not the case here. Lack of planned thinking and resources, both led to a miserable police failure.

Listener from IIT Kanpur: Madam, my firm belief is that police in this country works on bribery and out of fear. Nithari would not have been investigated if the media did not highlight it. Is there any hope for the common man?

Kiran Bedi: It is a reality which you have pointed out. I fully agree with you that only the issues which are highlighted would be investigated. In my view the biggest contribution of Nithari is that it has, for the first time, brought the police functioning in our country into limelight. From here, I appeal to the people of this great country to be organised and at least ensure that they vote for governments which would promise police reforms and implement them. This is a very good opportunity and people should not allow it to pass.

Sita Devi (mother of another missing girl from Nithari): Madam, the NOIDA police told me that I should have kept my daughter under control and they said my daughter might have run away with someone and could return in future. Whom do I trust?

Kiran Bedi: Look, the answers given by police in each of the three cases that I have heard from parents so far are similar, this is because policing in India is not for the common and poor people. This is a stark reality which stares us in our eyes. The police neither has the resources, nor the training or willpower to serve the common man. Till the time police reforms are implemented throughout the country, as directed by the Supreme Court on 11th January, it would not be possible to stop a repeat of Nithari .

I have been noting that in backyard areas of the national capital—Gurgaon, Faridabad, Ghaziabad and NOIDA—the problem is that governments are trying to maintain law and order through poorly run police posts. We should be very clear that ramshackle police posts cannot cope with the ever-increasing influx in these areas from all parts of the country. Till the time full fledged police stations with high ranking officials and modern machinery are used, it would be difficult for the common man to lead a safe life.

Nagendar Sharma: What are the options for common people to deal with the police?

Kiran Bedi: Firstly: as far as possible, no complainant should go alone to lodge a complaint, if possible. Secondly, the complaint should be followed up and if no action is being taken, the higher official should be informed in writing. Thirdly, the public should demand computerisation of police functioning to remove the role of human pen. Nobody could refuse a complaint, if it was sent electronically or even through phone, as the records would remain there. I stress that police functioning in the country would only turn pro-people if police reforms as directed by the Supreme Court are fully implemented in the country. Security Commission at the centre as well as in all states for promotions, transfers etc alone can ensure participation of common people in policing by making them stake holders. Since, presently, police resources are limited, therefore they are directed in favour of the rich. Till the time resources are increased and evenly spread, the poor would continue to be ignored.