Scindia's Exit Embarrasses Congress, But Will He Also Muddy The Waters For BJP In MP?

In the long run, if BJP leaders from MP are to be believed, Scindia's entry could mark a churning within the saffron party too -- just as it threatens to do for the Congress now, writes Puneet Nicholas Yadav. 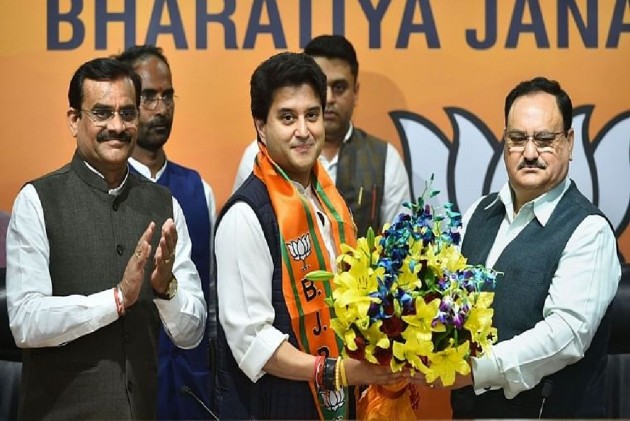 Much has been said about the major embarrassment and loss the defection of Jyotiraditya Scindia to the BJP earlier this week caused to the Congress party. Scindia was projected as one of the most promising young faces of the Congress and his proximity to the Gandhi family, Rahul and Priyanka in particular, makes the betrayal all the more humiliating. As does the fact that the high-profile exit has now put the party's Kamal Nath-led government in Madhya Pradesh at the risk of being toppled just 15 months after it was sworn-in.

But, what does Scindia's entry portend for the BJP? Yes, in the short term, it seems to have served two key purposes that rank high in Narendra Modi and Amit Shah's list of political priorities. It embarrasses the Congress, the Nehru-Gandhi family and paves way for the BJP's return to power in MP.

In the long run, though, if party leaders from MP are to be believed, Scindia's entry could mark a churning within the BJP too -- just as it threatens to do for the Congress now.

"A significant chunk of our state leadership comes from the Gwalior-Chambal division; the region that Jyotiraditya claims as his political fief. Leaders like Narottam Mishra, Gopal Bhargava, Jaibhan Singh Pawaiya, Anoop Mishra, Bhupendra Singh, Chaudhary Rakesh Singh, Rustam Singh, Lal Singh Arya and even (Union minister) Narendra Singh Tomar have bitterly fought the Congress's Scindias for decades. Now, they will have to work with Jyotiraditya and perhaps some of them will even be forced to play second fiddle to him," a senior M.P BJP leader told Outlook.

The leader's emphasis on "Congress's Scindias" has been an oft-debated point in the politics of the state's Gwalior region ever since Jyotiraditya's father, the late Madhavrao Scindia quit the saffron party to join the Congress back in 1980. Madhavrao's mother, Vijayaraje Scindia had switched to the Jana Sangh after a decade-long stint in the Congress back in 1967 when she played a key role in toppling Congress government in the state led by chief minister D.P Mishra. Vijayaraje, still referred to as the Rajmata of Gwalior, had gone on to co-found the BJP and her daughters - former Rajasthan CM Vasundhara Raje and former Union minister Yashodhara Raje - stayed within the saffron fold while Madhavrao and later Jyotiraditya represented the Congress-wing of the politically influential Gwalior royal family.

Madhavrao had been a bitter critic of the BJP for the 21 years that he served as a frontline leader of the Congress party (he had quit the party in 1996 due to differences with Narasimha Rao only to return to it shortly after) until his sudden death in a plane crash in September 2001. In the 18 years that Jyotiraditya stayed with the Congress, he, too, was known for his acerbic jabs at the saffron party and the Modi-Shah combine. Now, that Jyotiraditya is with the BJP, he has naturally changed his tune; singing paeans to Modi's leadership and his new party.

Just 15 months ago, when he was Congress party's campaign chief for the MP assembly polls, the BJP's election broadside against the Congress was largely focussed at Jyotiraditya. Former chief minister Shivraj Singh Chouhan, who welcomed Jyotiraditya into the BJP two days ago, hailed him as Vibhishan -- Ravana's brother in the epic Ramayana who betrayed the King of Lanka to help Lord Rama -- and accompanied him when the Gwalior royal filed his Rajya Sabha nomination on a BJP ticket from MP on Friday, had coined the "Bas Karo Maharaj" taunt during the polls. The attack was aimed at Scindia, who prefers to be addressed by supporters as Maharaj or Shrimant owing to his lineage and meant to score a key political point - that the BJP under Shivraj had run a government for the masses and not the elite. After Jyotiraditya joined the BJP, the former chief minister had told Outlook "now Shivraj and Maharaj are one".

Ever since Jyotiraditya stepped into politics in 2002, the BJP in MP had often mocked him for his arrogance and entitlement. Last year, when Pradyuman Singh, a cabinet minister in the Nath government and a Jyotiraditya-loyalist, had publicly touched the Gwalior royal's feet during a public reception, BJP leader Prabhat Jha had slammed the Maharaj for treating his supporters, even ministers, as royal subjects. When the BJP decided to reward Scindia with a Rajya Sabha nomination for his defection from the Congress, it was incidentally at Jha's expense. Jha, a national vice president of the BJP, was hoping the party would re-nominate him to the Rajya Sabha but instead was told by the leadership to accompany Jyotiraditya when the 49-year-old filed his nomination papers in Bhopal, say sources.

Scindia has also been assured of a cabinet berth by the BJP as part of the deal to defect from the Congress. The BJP's generosity, say sources, could extract a heavy price from the party in the years to come.

"Scindia has promised that he'll deliver at least 23 sitting Congress MLAs to the BJP and topple the Nath government. This means the MLAs will have to resign from the assembly and by polls will be held on their seats. Naturally, all of them will want a ticket and even if the party denies it to a few, most of the rebels will be accommodated. The BJP leaders, who lost the polls to these rebels will find their political careers threatened because Scindia will continue to root for his loyalists and dedicated party workers who have fought Jyotiraditya and his men for years will be relegated to the background," fears a BJP leader, who lost the 2018 Assembly polls to a Jyotiraditya loyalist.

The threat of having their political careers stifled by Jyotiraditya has made several BJP leaders from the Gwalior-Chambal region nervous. "Unlike the Congress, the BJP is a disciplined party with a dedicated cadre. In the by polls, the Congress rebels who get a BJP ticket may win because of this factor but do not be surprised by reports of sabotage. The real test for the party will come in 2023 when the state goes for polls again because it'll then be an open fight for tickets between old dedicated BJP karyakartas (workers) and the turncoats. If the karyakarta is overlooked, he will explore options with the Congress and the BJP will suffer", another local BJP leader told Outlook.

Sources say the state BJP leaders from Gwalior region have been told not to worry about Jyotiraditya's interference in party affairs of the state. However, concerns remain. "He may continue his politics at the national level like his father but he will also try to cultivate his leadership in the region. Jyotiraditya will not leave his chief ministerial ambitions and for that he will keep pushing for tickets for his loyalists which means his interference in the state will continue. Why would other ambitious BJP veterans of the Gwalior belt like Gopal Bhargava, Narottam Mishra or even Yashodhara Raje allow this," says a state BJP leader from Gwalior.

A senior party leader says the biggest setback from Jyotiraditya's entry into the BJP would be for K.P. Yadav, the Lok Sabha M.P from Guna. Yadav had stunned everyone last May by defeating Jyotiraditya from Guna, a constituency the Gwalior royal had represented for four terms in the Lok Sabha and was earlier the pocket borough of Madhavrao. Yadav, a former confidante of and poll strategist for the Gwalior royal who switched to the BJP in 2017 after Jyotiraditya refused to help him secure an assembly bypoll ticket from the Mungaoli seat, had hoped of emerging as a key BJP leader in the Gwalior region since his Lok Sabha victory. Though Yadav publicly welcomed the BJP's decision to induct Jyotiraditya, sources close to him told Outlook that the new Guna MP has been sulking. "Ever since he won from Guna, the party has not given any major role to Yadav though he is the only leader to have defeated a member of the Scindia royal family in Gwalior or Guna in the past seven decades. Now, Jyotiraditya is being sent as a Rajya Sabha member and there are rumours of him being made a cabinet minister at the Centre while Yadav remains a backbencher M.P. This is very unfair," the Guna MP's confidante said.

State BJP leaders, wary of the aftermath that Jyotiraditya's entry will have on the party's future in the Gwalior-region, also say Congress veteran Digvijaya Singh would be "the happiest man" in MP politics now. "Although Digvijaya's political influence has always been pan-MP, he has always wanted to establish a monopoly on the Gwalior-Chambal region when it comes to ticket distribution during polls. This was one of the reasons for his rivalry with Madhavrao which Jyotiraditya received as a legacy because Digvijaya belongs to the same region as the Scindias. With Jyotiraditya finally quitting the Congress, Digvijaya will have a free run in the Congress to decide matters related to the Gwalior region and he will pass on this influence to his son, Jaivardhan Singh, a two-term MLA. Also, given his political acumen, Digvijaya will try to lure strong BJP leaders, who are unhappy with Jyotiraditya's entry now or those who get disillusioned in the future, to Congress" said a BJP leader.

For now, the BJP may have scored a major victory against the Congress by netting Jyotiraditya. However, the asset could turn into a major liability in the foreseeable future if the party's central leadership fails to address these concerns of state-level leaders and, unwittingly, ends up helping arch-rival, Congress, instead.