Studies of the Neanderthals right up to fairly recent times overwhelmingly portrayed these hominins as extremely primitive cavemen – little more developed than apes. Indeed, one of the names earlier proposed for these people was Homo Stupidus,

Around 200,000 years ago, there appeared on Earth a class of proto-humans. Descended from even more primitive humanoid ancestors, they spread out (very thinly) over an enormous land mass; occupying what is modern day Europe from Spain in the west to as far as the Ural Mountains in the east.

Bones of these people first started to be discovered in the mid-19thcentury and have continued to surface periodically right up to the present day. Systematic paleo-biological analysis of these finds has placed them as belonging to a separate species of humans –Homo Neanderthalensis.

Studies of the Neanderthals right up to fairly recent times overwhelmingly portrayed these hominins as extremely primitive cavemen – little more developed than apes. Indeed, one of the names earlier proposed for these people was Homo Stupidus, and the term ‘Neanderthal’ is used pejoratively even today for anyone exhibiting abnormally brutish or coarse behaviour.

However, over a period of 100,000 years or so, these beings developed slowly but surely; adapting to their environment and gaining increasing mastery over it. Recent finds combined with more sophisticated modes of analysis have allowed us to form a more complete understanding of the Neanderthal and the picture that emerges is that of a truly remarkable human.

The Neanderthal man crafted tools, hunted in complex social groups, and appear to have likely had a language (of which practically nothing is known). Their diet appears to have been well balanced, and most amazingly, they made ornaments, buried their dead, and possibly even invented a water craft in which they sailed the seas. In short, far from the brutish ape-man of popular lore, the Neanderthal was a ‘stone’s throw’ from being fully human. 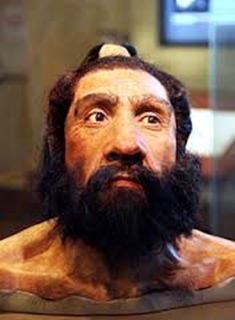 This is not surprising given that the size of the Neanderthal brain matched that of the average modern human (Homo Sapiens). Subsequent mapping of Neanderthal DNA recovered from their bone fragments indicate that they shared 99.7% of the Sapiens genetic sequence.

V. S. Ramachandran, Director of the Centre for Brain Cognition, University of California, San Diego, and one the world’s leading neurologists, says that such hominins (he was speaking of another similar human species) ‘challenge all our preconceived notions of what it means to be human’. Were the Neanderthals self aware? Did they have a moral sense? Were they aware of their mortality?

Sadly, we may never know the answers to these profound questions, for, around around 40,000 years ago, these alternate human species vanished from the face of the earth. Several reasons have been advanced for their extinction, including climate change for which the Neanderthals were ill-prepared. Even if climate shifts played a part, it seems very likely that the main cause was the arrival of us – Homo Sapiens – into their world. Sapiens’ superior social networks, hunting and resource gathering techniques, including the domestication and use of wild dogs in the hunting of prey, placed increasing pressure on the Neanderthals and tipped them over into extinction.

The fate of these hominins raises overarching questions about what we Sapiens have done to other species in our inexorable march across the Earth’s landscape. Sapiens arrived in Europe from Africa and also fanned out towards Asia around 45,000 years ago. So, in a relatively short blip of 5,000 years (when we consider that Neanderthals had lived in Europe for 200,000 years) we had wiped out our human cousins.

But in a weird inversion to this tale of unremitting Earth conquest, scientists are now contemplating an astonishing possibility: resurrecting the Neanderthal. Even a decade ago, such a prospect would have rested squarely within the realm of science fiction, laced with such sci-fi staples as time travel and discovery of a lost race. But in 2013 a multi-disciplinary, multi-country team of scientists led Max Planck Institute for Evolutionary Anthropology in Germany managed to map the entire genome of an 130,000 year Neanderthal from a single toe bone discovered in a Siberian cave. Described as an ‘amazing technical accomplishment’, the Neanderthal genome has become a genetic encyclopaedia offering fresh insights into the life and times of this species. One of the insights to emerge is that early humans very likely interbred with Neanderthals, suggesting cultural similarities that invert many of our notions of superiority over these early humans.

The Neanderthal Genome Project also has raised a deeper and altogether surreal question: What if we can bring the Neanderthal back?

As Harvard professor Frank Church – one of the world’s leading synthetic biologists – said in a 2016 interview:

The first thing you have to do is to sequence the Neanderthal genome, and that has actually been done. The next step would be to chop this genome up into, say, 10,000 chunks and then synthesize these. Finally, you would introduce these chunks into a human stem cell. If we do that often enough, then we would generate a stem cell line that would get closer and closer to the corresponding sequence of the Neanderthal. We developed the semi-automated procedure required to do that in my lab. Finally, we assemble all the chunks in a human stem cell, which would enable you to finally create a Neanderthal clone.

Then, using an ‘extremely adventurous female human’ as a surrogate mother, the reconstructed Neanderthal DNA would be introduced into a Sapiens ovum, ‘thus producing the first Neanderthal child in 30,000 years.’

But why would we wish to resurrect a long extinct human? Many scientific reasons of questionable validity abound. Church himself believes that bringing back the Neanderthals would add to the social and cultural diversity of mankind that he believes necessary for any species survival. It is also possible the Neanderthal’s brain structure and alternative ways of thinking may provide us with fresh solutions to problems that seem endemic to modern societies. But the most inventive one advanced by several scientists is the ‘ethical’ argument: since we were responsible for their extinction we have a duty to bring them back!

The Neanderthal project is only a small subset of the surreal set of choices that the astonishing technological advances in genetics, physics, self-learning computers and the like are placing before mankind. Choices for which we have no clear compass. As Yuval Noah Harari says in his influential book, Sapiens:

We are more powerful than ever before, but have very little idea of what to do with all that power. Self-made gods with only the laws of physics to keep us company, we are accountable to no one.

The fate of the Neanderthals, however, could hold out some profound lessons for us as we contemplate our future. In one sense, the very weapon – superior intelligence – that that was so potent against them is perhaps taking us closer to their fate than we realize.

We already have artificial intelligence (AI) systems that far outperform humans in several areas requiring deep learning such as chess, bridge or Go. A recent survey of the world’s foremost AI experts assigned a 90% probability to the development of a superintelligent being could come into existence¾so, within this century.

We use the word ‘being’ advisedly for in one version at least, such an entity would possess the neural network of a human brain, but endowed with a will and cognitive power far beyond the reach of any human. In other words, the gap between ‘it’ and ‘us’ will likely be far greater than between us and the Neanderthals.

As the physicist Stephen Hawking warns: ‘The real risk with AI isn't malice but competence. A super intelligent AI will be extremely good at accomplishing its goals, and if those goals aren't aligned with ours, we're in trouble.’

Given the record of Sapiens on earth, it may well be that the Neanderthals will have the last laugh.

(Aroon Raman is a Research and Innovation entrepreneur and the author of the national bestsellers The Shadow Throne and The Treasure of Kafur. His latest thriller, Skyfire, has been nominated as one of Amazon’s must-read picks of 2016. He can be reached at www.aroonraman.com)