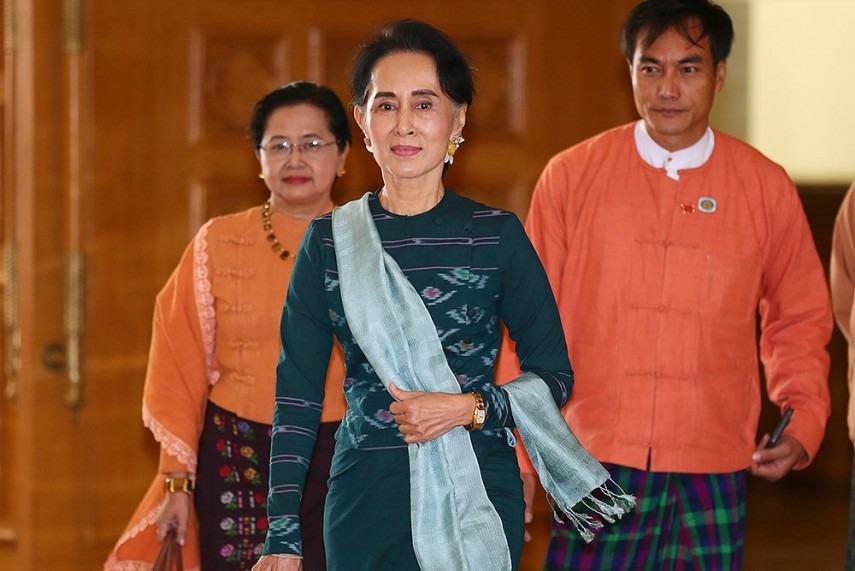 Suu Kyi said, "We are facing the same problem as India is facing in Kashmir".

"We have to take care of innocent citizens as our resources are not as adequate as required, but we try our best and make ensure that every citizen is entitled to the protection of law," she added.

Elaborating on the difficulties her government is facing, Suu Kyi said, "We have to think about how to differentiate between terrorists and innocent people. You in India are well-versed with this, because India has a large Muslim community and in place like Kashmir, where you face terrorism, the trouble of sorting out the terrorists from the innocent citizen and all those who are not involved in the terrorist movement at all, comes up."

Suu Kyi further said that the issue of the Rohingya Muslims is one of the biggest challenges, dating back to pre-colonial times and hence, will take time to be resolved.

"The issue [Rohingya Muslims] is one of the biggest challenges Myanmar has to face, because you know that the situation in Rakhine has been difficult for many decades and infact it goes right back to pre-colonial times," Suu Kyi told ANI.

She added, "It is a little unreasonable to expect that the issue can be resolved in 18 months as you know that our administration has been in power for the last 18 months."

The state councillor said that her government is trying to progess on the development front, which is one of the 'biggest problems' as the matter is "we have very limited resources".

Suu Kyi said, "We are implementing recommendations given by former U.N. secretary-general Kofi Annan as quickly as possible to create harmony and peace in the Rakhine state. Our recommendation is harmony and we shall be addressing it quickly."

"A commission led by former U.N. secretary-general Kofi Annan has recommended economic development and social justice to counter the deadly violence between Buddhists and Muslims in the Rakhine state," she added.

Earlier, Prime Minister Modi had earlier said that India shares Myanmar's concern on extremist violence in the Rakhine state and that he hopes that all stakeholders can find a solution, in which the unity and the territorial integrity of the country is maintained, together.

Suu Kyi thanked Prime Minister for taking a strong stand on the terror threat that Myanmar faced and assured India that 'terror would not be allowed to take roots in her country.'

"Together both countries will ensure that terror is not allowed to take roots in our country," de-facto leader Aung San Suu Kyi said.

"We would like to thank India for the strong stand that it has taken with regard to the terrorist threat that came to our country," said Aung San Suu Kyi, to which Prime Minister Modi responded that "India completely understands the challenges."