It is getting difficult to keep track of all the bans and new regulations that keep flooding in...

In Maharashtra it is getting difficult to keep track of all the bans and new regulations that keep flooding in. So we may have digested the beef ban and performed yoga on Yoga Day and all of that but the latest sounds more serious. The state government interpreted the Bombay High Court order and guidelines to bring out a circular that pretty much makes criticism of the government/government officials an offence under the stringent (draconian?) sedition charge.

While the debate on whether the legalese in English was lost in translation while bringing out an official circular in Marathi continues, Amnesty International, along with many other activists, has drawn attention to possibility of its misuse. "This circular makes an already bad law even more likely to be abused," said Abhirr VP, Campaigner at Amnesty International India. "It is vague and overly broad, and can be used by the Maharashtra police to arrest people for legitimate political criticism."

Ironically, these guidelines were issued by the Court while dismissing the case against Aseem Trivedi, a political cartoonist who was booked under this charge during the India Against Corruption campaign in 2012. Even as the government seems to tighten the noose around different kinds of freedoms guaranteed by the Constitution, voices for a complete repeal of the sedition section, which is a colonial hangover, are also getting louder.

Nine years after the city suffered one of the worst attacks when pressure cooker bombs ripped through first class compartments during rush hour killing 187 people, 12 of the 13 accused were convicted by a special MCOCA court. The verdict that came on the 14th anniversary of the 9/11 attacks in the US, caused mixed reactions.

After the blasts, the police had arrested the accused, after several combing operations etc., within days and they were all said to be involved with the Students Islamic Movement of India. While the families of victims continued to ask for death penalty for the accused, there were a couple who said they have forgiven the accused. Parag Sawant, the last victim to succumb to the attacks, died at Hinduja Hospital this year after lying in coma for all these years.

However, what I remember is that night when we were confronted with train compartments that were ripped open, scores of people walking on roads till late after midnight, mangled bodies at civic hospitals, families trying to identify the victims, slum dwellers, who carried the patients in stretchers made out of their sarees and sheets, people helping everyone without asking for identity and most importantly the suburban train service, the life line breathing life back into the city within hours after the blasts. Wonder if we still have all that spirit left? 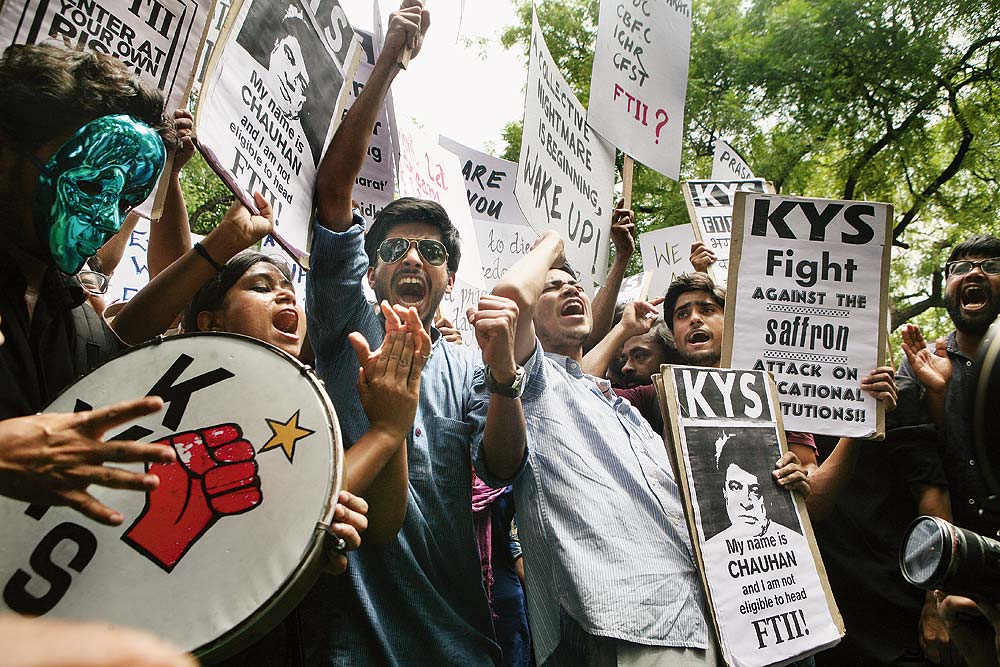 No one, neither the government nor the students, would have expected the standoff or the strike to go on for over three months. However, the matters have precipitated with three students going on hunger strike. Two of them have been admitted to hospital and two others have joined the hunger strike. The government is yet to budge and the delegation that visited the campus after the police crackdown is yet to submit its report.

To support the students, reputed filmmakers such as Adoor Gopalkrishnan, Dibakar Banerjee, Hansal Mehta and Kundan Shah came together and appealed to the President to intervene. "This strike is very different from the previous strikes. When I was there as a chairman, at that time the students were on strike but we solved the problem. This strike will have far reaching impact," Adoor Gopalkrishnan told Outlook.

The students released the following statement, " Students are tired, frustrated and angry with the way the ministry is responding to us, in spite of our repeated attempts to communicate with them. In the light of events occurred today – Hilal Savad, one of the students on hunger strike had to be admitted to the ICU after his blood sugar level fell down drastically. Another student, Ankit Thappa has decided to sit on hunger strike from today, immediately taking Hilal's place, hoping the government will resolve the crisis, or ready to meet the same fate as Hilal. The other two students, Alok Arora and Himashu Shekhar continue to fast, their health deteriorating every hour as the government chooses to ignore us. What more will it take for us to make the government respond to our concerns? Today we ask the country, did we elect a government which is so cruel and insensitive? Whose ego is more precious than the lives of the students of this country? Correct us if we are wrong, but we thought a government in a democracy was for the welfare of its citizens. Today, it seems otherwise. Today, it seems the government holds a farcial mask of democracy with the intent to protect and benefit itself. And unfortunately, not the people of this country. The people, who once, were hopeful of this government are slowly beginning to lose faith…"

And no, there is no response to this letter yet.

As if the state wasn't giving enough dope for bad news, a recent report in the Times of India shows that maximum killings of RTI activists, 10 in all, have occurred in Amcha Maharashtra since the law was passed. "Data compiled by the Commonwealth Human Rights Initiative shows that 60 RTI activists were attacked, harassed or killed in the state, the highest for the country. When it comes to murders, Gujarat and UP come second with 6 each, followed by Karnataka and Bihar with 4 murders each. When it comes to a count of activists attacked, killed or harassed, Gujarat comes second with 36, followed by UP at 25 and Delhi at 23," says the report.

In the meanwhile, probes into murders of RTI activists or rationalists continue to lag behind and relatives such as Sandeep Shetty, brother of Satish Shetty and Mukta Dabholkar, daughter of Narendra Dabholkar continue to fight lonely battles. Not to forget the High Court expressed concern over delay in Dabholkar's murder probe earlier this month. 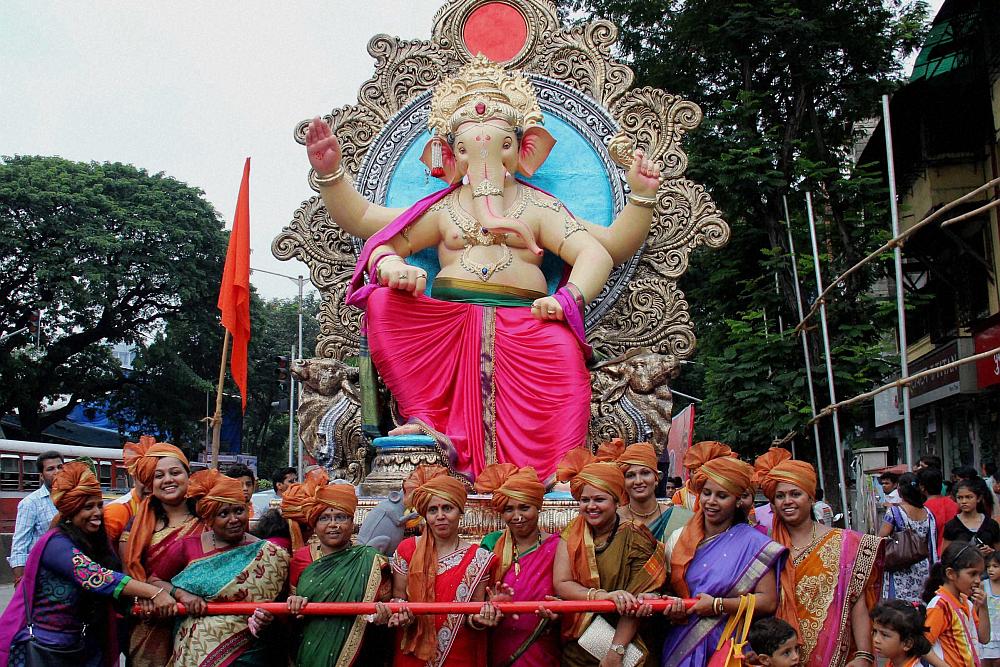 Let the party begin, but…

And just as the pious period Shravan comes to a close, the festival season has already started. After a rather raucous celebration of Dahi Handi, where NCP refrained from celebrating because of severe water shortage and rain crisis but others continued nonetheless breaking most noise pollution related rules, we are eagerly awaiting the most favourite festival of the city, Ganesh Chaturthi.

The politics over the most colourful and also the most harrowing festival is likely to heat up soon, given the recent controversy over meat ban. It remains to be seen if the Bombay High Court directive of not allowing pandals on footpaths and middle of the roads, will be followed or not. Given the preparations of the big and famous Ganapatis of the city, it is more likely to be a repeat of every year, including desperately sincere prayers for a good receding monsoon so as to have some water in the reservoirs and showers for the fields. Time to get into the modak mood…

We have a lovely exchange of sorts here, when it comes to art and poetry. City's beloved artist Atul Dodiya's exhibition Mahatma and the Masters open at Galerie Daniel Templon at Brussels. "The artist has created a fascinating new show with a series of previously unseen hybrid works combining oil painting and photography… Atul Dodiya establishes a dialogue between two simultaneous moments in history: the fight for Indian independence between 1910 and 1947 and the founding of artistic modernity in Europe. Each work combines an episode of Gandhi's struggle with contemporary creations from artists such as Picasso, Mondrian and Malevich,”" reads the opening invite.

And much closer home, at the Piramal Gallery at the NCPA, a Photo-Poetry exhibition titled, "Octavia Paz in India", is all set to enthrall Mumbaikars. The exhibition is a collaboration between NCPA and Mexico government and is on till September 30. Only when we see it, will we know what is photo-poetry dialogues no? Not to be missed.