This Independence Day, may I suggest the PM follow the golden rule and be silent and give people the liberty to enjoy as they wish. 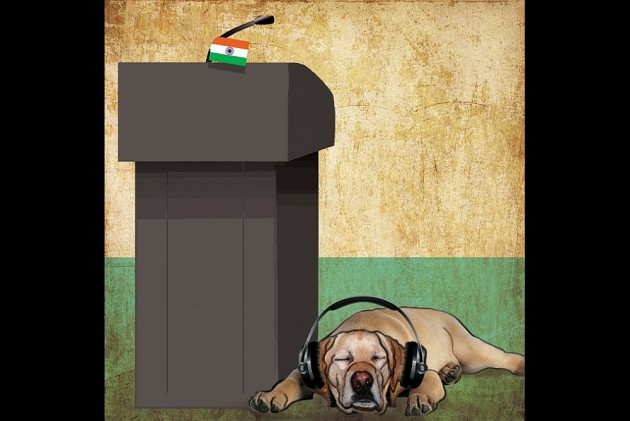 Prime Minister Narendra Modi is again on a populist mission. He has appealed to the people for ideas and suggestions for his Independence Day address from the rampart of the Red Fort in Delhi on 15th August.

I would like to suggest that he should break a new ground and give good wishes to all citizens for a very happy Independence Day in his 'Man Ki Baat' and then follow the golden rule and be silent and give people the liberty to enjoy as they wish.

It is high time the politicians of all parties discontinue several national and regional functions, which have lost novelty and have turned into a boring routine.

It is not that the Independence Day has lost its glory and importance, but the usual mundane discourses of the incumbent prime ministers at the Red Fort and the chief ministers at the state level do not inspire anything but sleep.

It was understandable in the initial post-independence years, when Prime minister's Independence Day address was awaited and welcomed. But if Pandit Nehru himself had stopped that custom after, say, a decade, it would have been hailed by the people.

Independence Day follows after the budget session of the parliament. The government gets ample scope to explain its policies and programmes to the people. Therefore, it is not imperative to continue to have a special function at the Red Fort.

Until recently, the means of communication in India were limited. But with the proliferation of internet, television, mobile phones and social networking for over a decade, we are now overwhelmed by too much communication; and there must be several people like me who have to try hard to avoid the onslaught.

Mr. Modi or anybody in his place would, as usual, give a laundry list of achievements, followed by another list of programmes for the coming year.

People take all this with skepticism and are rarely enthused. TV cameras reveal how the audiences at the Red Fort and different places all over the country look bored and indifferent.

Moreover, the speakers love their own voices; and specially in India, they assume that others' time has no value. So at such functions they merrily go on speaking for a long time.

Prime Ministers and Chief Ministers care less for the torture suffered by the audience in the sultry weather in Delhi and most parts of the country. Several in the audience, who are compelled to attend, might be praying for heavy showers.

It is not that we alone have such national functions. France celebrates July 14 as a national day. People eagerly watch the military parade and also enjoy concerts.

Most of the East European countries freed from the Soviet Union's grip have their national days, but nowhere do the speeches take as much time as ours.

Russia's November 7 function is well-known. Though it is on the day of Revolution, it did not begin immediately after the Revolution.

When the Nazi Germany invaded Russia, Stalin ordered a parade in the red square in Moscow. He decided this, when the Germans were closing in on Moscow. The idea was to demonstrate the defiant, courageous, nationalist spirit and pride of the Russian people and boost the morale. It was feared that the top leadership would fall an easy prey to Luftwaffe strikes. But Stalin did not waver. Thus, the parade in the Red Square has a history. But lengthy speeches had no place in the programme.

In UK there are national functions. The discipline and order are remarkable. Even if the Queen is the scheduled speaker, she takes very few minutes.

In the US, July 4 is celebrated as the Independence Day. But in Washington or in the capital cities of the states and other places the whole function is managed by the citizens and their groups. In the evening there is a concert in some public park, open to everybody; the national anthem is sung, followed by a programme of entertainment by some well-known singers and musicians. The US President or the governors of the state do not appear on the stage. Sometimes they send their good wishes, but nothing more. Fireworks at the end of the function are worth watching.

Our leaders of all parties are eager to give messages not only to our people but to the whole world. They believe that we are endowed with spiritual wealth. So they go on preaching the world.

It would be hailed, if Mr. Modi ushers in the celebration of the Independence Day in a totally new way, letting people enjoy on their own with eloquent silence from politicians.