The youth brigade deliver the goods for India at the Kensington Oval, previously a nemesis for the visitors. 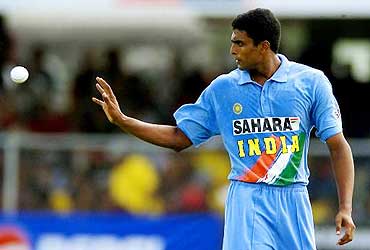 Helped by sterling performances from some of the fresh faces, India carved out an easy and comprehensive seven-wicket victory in the third one-day international over the West Indies at the Kensington Oval to go 1-0 up in the rain-affected five-match series.

Neither the disappointment of losing the Test series nor their dismal track record at the venue seemed to affect the Indians who produced a fine all-round performance to register their first win, in either form of the game, at the Kensington Oval.

And the men mainly responsible for the victory were the only two not to get a game despite being in the squad for the Test series -- left-handed batsman Dinesh Mongia and speedster Tinu Yohannan.

Yohannan claimed three important wickets for 33 runs in his debut one-day match as West Indies were bundled out for 186 in 44.5 overs after being put in to bat by Indian skipper Saurav Ganguly.

Ajit Agarkar, with three for 36, and Virender Sehwag, who took two for 23 runs, also played their part.

For West Indies, only skipper Carl Hooper, who remained unbeaten on 76, and Ramnaresh Sarwan (44) made significant contributions, the two adding 87 for the fourth wicket after they had been reduced to 53 for three in the 16th over.

And when India came out to bat, Mongia shone with a fluent 74, his second highest score in one-dayers, as he guided his side to victory in 43.5 overs. Mongia was later declared man of the match for his effort.

With the target anything but challenging, the Indian batsmen went about the task in an easy-paced -- indeed at times in a casual manner. In fact, all the three wickets were gifted to the West Indies, as none of the batsmen ever looked troubled by a mediocre home attack.

India went into the match with four of the five new arrivals who had joined the team for the one-dayers, the only exception being left-arm spinner Murali Kartik. With batting being a cause for worry in the Test series, India also asked Rahul Dravid to double up as wicketkeeper in order to accomodate an extra batsman in the side.

India made a significant change in the opening combination, with Sehwag pairing up with Ganguly instead of Sachin Tendulkar who was brought down the order to give greater stability to the middle order especially while chasing a total.

After starting off reasonably well, Sehwag who made a 36-ball 21 with three fours, simply threw his wicket away when he tried to attempt a big hit when there was absolutely no need for it. He holed out to Ramnaresh Sarwan at mid-off off Mervyn Dillon, India losing their first wicket for 41 in the 11th over.

Ganguly too gifted away his wicket in a similar fashion after making 41 runs and adding 68 for the second wicket with Mongia. The skipper stepped out to hit Chris Gayle over the top but was caught by Hooper at short covers. Ganguly hit five fours during his 65-ball knock.

Mongia and Tendulkar then batted beautifully to bring their side within 21 runs of the target. Mongia reached his second one-day half-century with his seventh four and did the bulk of the scoring as Tendulkar remained content to rotate the strike with singles.

Just when it looked all over, suicidal tendencies overtook Mongia too, and he softly chipped Ryan Hinds to mid-off where Chanderpaul took the simplest of catches. Mongia faced 104 balls and hit nine boundaries.

Tendulkar and Dravid then completed the formality in the 44th over and remained unbeaten on 34 and nine respectively.

Tendulkar hit Ryan Hinds for two consecutive boundaries before taking a two on the next ball to bring up the winning runs.

Earlier, West Indies put up a disappointing show and kept losing wickets at regular intervals. It was Yohannan, selected ahead of left-arm seamer Ashish Nehra, who sent back both West Indies openers with only 45 runs on the board.

Gayle was caught by Mongia for 16 while Wavell Hinds was clean bowled for 15. Brian Lara had another poor day, scoring only five runs before being caught by Mohammad Kaif off Harbhajan Singh.

At this point, rain disrupted play for about 25 minutes forcing the match to be reduced to 49 overs a side. Hooper and Sarwan, two of the success stories of West Indian batting in the Test series, then tried to rebuild the innings with the fourth wicket association but once the Indians broke the partnership, in the 32nd over, the home team crumbled.

Sarwan was clean bowled by Sehwag for 44, made off 69 balls with five fours, and that signalled the slide of the West Indian innings. Not even Chanderpaul, who had been the thorn in the flesh for the Indians in the Test series with 562 runs, was able to stem the rot.

Chanderpaul was run out by a direct hit from Tendulkar after making just five runs.

Yohannan, who had figures of two for 22 from his first spell of seven overs, then dismissed Ridley Jacobs through a debatable decision. Jacobs was caught by wicketkeeper Dravid without opening his account.

Dravid effected a stumping as well, the victim being Ryan Hinds off the bowling of Sehwag. Hooper, who batted beautifully throughout, hitting six fours and two sixes in his 75-ball knock, ran out of partners towards the end when Agarkar polished off the tail in a two over burst.

Agarkar dismissed Dillon (2), Corey Collimore (1) and Cameron Cuffy (0) to bring an end to the West Indian innings in the 45th over.