Up against a daunting 392, the number 9 batsman (52 off 55 balls) shepherded the last three wickets through the final 21 overs to thwart the assault by Kumble (4-107) and saved the hosts from certain defeat. 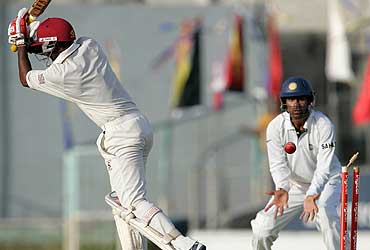 The West Indies withstood some heart-racing moments and staved off a spirited bowling performance by India to clinch a thrilling draw in the first Test on Tuesday.

The hosts owed their great escape to a gritty half-century by number 9 batsman Dave Mohammed who shepherded the last three wickets through the final 21 overs and saved the hosts from certain defeat on the fifth and final day at the Antigua Recreation Ground.

Up against a daunting target of 392, the West Indies were comfortably placed at 171 for three at one stage before a middle order collapse saw four wickets fall for 55 runs in the final session.

Mohammed's aggressive 52 off 55 balls then kept the Indians at bay and after his fall, Fidel Edwards and Corey Collymore saw off the last three overs to leave their team unconquered on 298 for nine.

Anil Kumble (4-107) led the attack admirably while Virender Sehwag (2-39) and Sreesanth (2-49) provided vital breakthroughs but the West Indies tail proved to be a hard nut to crack in the end.

Yet, to be pushing for victory on the last day after being outplayed on the first two itself was a dramatic turn around in fortunes for the visitors.

Man of the match Wasim Jaffer's maiden double ton and Brian Lara's second innings duck on the very ground where he twice broke the world record batting score were the other highlights of the last international match at the ARG.

Mohammed's last hour heroics put to shade a 99-run partnership between Chris Gayle (69) and Shivnarine Chanderpaul (62) who rescued them from a precarious situation earlier in the day.

The home team made a smooth start through a 67-run opening stand between Daren Ganga and Gayle before losing three wickets in less than five overs in the first session. 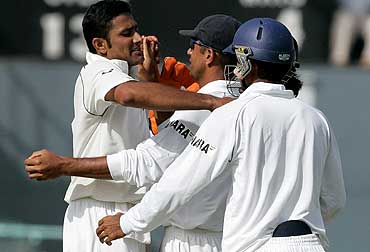 Kumble gave the first breakthrough when he had Ganga (36) caught brilliantly by Yuvraj Singh at forward shortleg.

A run later, Ramnaresh Sarwan (1) played a reckless drive against Sreesanth (2-42) to spoon a simple catch to Kumble in the slip cordon.

Sreesanth then got one straighten up to rap Brian Lara plumb in front for zero.

Gayle and Chanderpaul then led the middle order recovery adding 99 runs for the fourth wicket before the former fell leg before to Kumble.

Gayle played an unusually subdued innings but ironically it was his belligerence that brought his downfall ultimately.

Having been punished for a huge six in the over before tea by Gayle, Kumble resorted to bowling looping leg breaks in order to force Gayle out of his shell.

After driving to the cover fence and playing a lofted six over long off, Gayle thrust his front pad with the bat tucked behind to Kumble.

The cracks widened further when Chanderpaul played a similar shot to Kumble from around the wicket, the ball taking a faint outside edge after hitting the front pad on its way to Rahul Dravid at first slip.

Dwayne Bravo then succumbed to the revelationary off-spin of Virender Sehwag.

The part-time bowler, who had claimed 2-32 in the first innings, bowled with beautiful arc and dip, and was helped by the variable bounce of the pitch.

One such delivery drifted from off to shade outside the stumps and a double-minded Bravo played a defensive prod for a snick well taken by Dhoni.

Sehwag did not need such subtleties to dismiss Denesh Ramdin who attempted to cut a ball too close to him and gave Dravid his second catch of the innings.

Bradshaw and Mohammed offered some stout resistance adding 51 runs for the eighth wicket.

The Indians took the new ball at the start of the mandatory overs, at which point they needed three wickets to clinch the issue.

The second ball of the fifth over in the final hour, Bradshaw was lured into a full length delivery from Patel and snicked it to Dhoni for a straight forward catch.

That brought Fidel Edwards, who did not bowl for most of India's second innings because of a hamstring pull, to the crease.

Dravid immediately brought on debutant Vikram Rajvir Singh who had the no. 10 batsman with a snorter in the previous innings.

In the meantime, Mohammed was living dangerously. Trying to meet Kumble on the rise, Mohammed stretched out of the crease and was beaten but Dhoni, who had taken six catches in the match so far, grassed the quicker one.

The score, 292 for eight, and it was the sixth-last over.

Kumble now switched to around the stumps.

Mohammed's response was to fiercely cut the leg-spinner and the edge flew through the slips to the third-man fence, bringing up the left-hander's half-century.

Edwards, egged on by support runner Ganga -- who did not have to do much running though -- held out VRV Singh at the other end.

Nails were being chewed in the stands now. Husbands and sons looking for another mug of rum were made to remain in their seats by wives and mamas so that luck stayed with the hosts.

Mohammed had outrageously thwarted the Indians, and even more so, pushed the score from 226 for seven to 297 for eight in quick time.

With four overs remaining, Kumble decided to come over the wicket. The penultimate delivery, the Bangalorean gave a little more flight and loop to beat Mohammed's hesitant bat and rattle his furniture.

Edwards and Collymore added one run to the last wicket but crucially came through the last 19 deliveries unscathed.

The former faced 36 balls while Collymore held his nerve to see off the final six deliveries from Sreesanth.

The teams square up in the second Test at St. Lucia from June 10 to 14.