A country that's obsessed with its middling cricket team and satisfied with institutionalised mediocrity, shows that it doesn't have the stomach for Chappell's way to excellence. 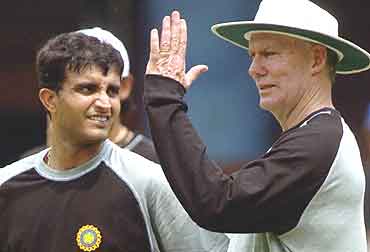 The ongoing feud between Greg Chappell and Saurav Ganguly has claimed an unlikely victim. Chappell's website Chappellway.com formed during his pre-India coach avatar has ceased to exist for all practical purposes. Chappell's associate, Ian Frazer, who was virtually running the show all this while, tersely says: "Greg and I were forced to take this action to ensure we keep the integrity of our vision. Over the next period we will investigate better ways of providing leading edge interaction. In the meantime I encourage some reflection on your own learnings. Good time to go back and have a look at some old posts. I'll certainly be taking advantage of the break."

One really wonders how the integrity of vision of a venture, which essentially was a discussion forum, could possibly be endangered by what's happening between Chappell and Ganguly. But it is likely that the website's members, most of them die-hard Indian fans of Chappell, flooded its pages with venomous comments against Ganguly. Something that could further embarrass the already beleaguered Indian coach.

Within a few hours of Ganguly's fateful press conference in Zimbabwe, there were about 3,000 well articulated comments on the site, supporting Chappell. It is interesting to see how Chappell's public support curve has shown a steep decline in the last one week. Most of the dipstick surveys conducted a week back showed the captain trailing the coach 35 to 65. With the review committee virtually absolving Ganguly of all charges levelled against him by the coach, public opinion too seems to be with him now.

But it is still surprising that Chappell, an outsider, has been able to divide opinion so sharply in a country where cricket following is characterised by extreme jingoism. And that tells me that the youngsters in urban India (the set that most of these surveys and SMS polls cover) are watching a hell of a lot of European football on TV, where coaches like Jose Mourinho and Sir Alex Ferguson call the shots, and are more influential than most of their team members.

If Ganguly had decided to pursue his first love football and acted in the reckless manner that he has, as the captain of a team, there would have been no review committees and SMS polls. He would simply have been shunted out. The Irish are as passionate about football as we are about cricket, and Roy Keane a more pivotal character for his team than Ganguly. But that didn't deter the Irish coach from sending the celebrity captain, who refused to play ball, on a long journey back home to Dublin from Yokohama in the midst of the all important 2002 World Cup campaign. More recently, Mourinho, the Chelsea boss, not only dropped Ricardo Carvalho, star defender, a protégé and fellow Portugese, for a couple of games but also asked him to get an IQ test done for making his outrage public over the star-studded team's rotation policy.

Having watched more hours of football than cricket in the last one year, I would personally like to see a rule framed in Indian cricket whereby a player would be dropped for two matches if he gets run out on account of failing to slide his bat to the crease while taking a run, instead of casually plonking it in, as if he was doing mankind a favour by scoring it. Doesn't matter if the player in question is a Virender Sehwag who hits a hundred in the match.

But M/s Sehwag and Ganguly (the two most frequent plonkers) needn't worry. Such rules can never come into effect here because we are Indians. Any coach who works here will have to work "within the system". It is a unique system indeed resting on the pillars of inefficiency, mediocrity, inflated egos and total opacity. And we seem to be guarding it with the same zeal with which countries like Australia and New Zealand protect their unique bio-diversity using the most stringent quarantine laws.

Ergo, Greg Chappell, Member of the Order of the British Empire must go. His direct Australian methods and the "commitment to excellence" threaten to destroy the edifices of mediocrity that that we have erected with such great care. He is a bloody liar who is out to tarnish the good name of our winningest and angel-like captain who is also in serious contention for the non-playing captaincy of India's Davis Cup team for his great motivational skills. Move over Leander Paes. Chappell, after all, slave-drives them, and has a "headmasterly" attitude towards players who don't follow the training routines. We are not natural athletes, you see. When it comes to natural ability, flair and skills, we can beat the Aussies hollow

A lot of cricket writers and ex-players have asked if we should be treating our heroes like Ganguly in this manner. But what about Chappell? He may not have endorsed as many products as Ganguly but has more Test runs and is probably still a hero Down Under. Imagine what we'd have said if Sunil Gavaskar or Kapil Dev had been called a liar by Cricket Australia. We branded match referee Mike Denness a racist when he accused Sachin Tendulkar of ball tampering and stopped short of conferring a similar title on umpire Daryl Harper when he gave Tendulkar out LBW when he was struck on the helmet ducking a short-pitched ball from Glenn McGrath.

But soon after Chappell leaves for Adelaide, after a "swadeshi" coach like Mohinder Amarnath is installed, we should collectively, as a nation, resolve not to feel envious when Australia wins another major tournament or England stamp their newfound authority on the cricket field. Nor should we ask ourselves stupid questions like why we lost yet another cup final. Sehwag will occasionally make a sparkling hundred, Irfan Pathan would bamboozle Bangladesh with his in-swingers and we'd still have heroes to worship.

A Temporary And Tenuous Truce