Mistakes All The Way

The Indians looked disjointed and there was little co-ordination between the midfield and the forwards. Basics like trapping, too, seemed poor. At this level, a coach cannot be expected to correct such basic problems. 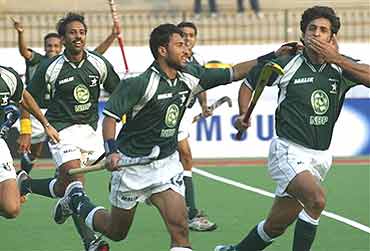 An India-Pakistan match is something that always excites people on either side of the border. But this one in Lahore's National Stadium was no excitement.

The match never rose to the heights that we have often seen in India-Pakistan matches in the past. Maybe the tension of playing at home got to Pakistan. And in the case of the Indians, they were trying to keep things in check and avoiding defeat in a match that was keenly watched by thousands at home.

Either way, one saw more mistakes than classy moves and the end result was a 2-1 victory for Pakistan, which on the strength of the number of attempts and chances they had was rather low.

For India, it was a case of getting away with a narrow loss despite gaping holes and mistakes in defence.

It was somewhat unlucky for India that the winning goal for Pakistan came in a controversial manner. The stroke that was awarded to them looked a little dubious.

With about five minutes to go for the match, Pakistan got a stroke when a deflected ball hit Viren Rasquinha and Sohail Abbas made no mistake and in the process became the highest all-time scorer in Champions Trophy.

The Indians may also have felt they deserved a stroke in the last couple of minutes, but then this is all part of the game. Umpiring lapses become magnified in defeats and get pushed to the background in victories.

Once again the overall performance of the Indian team disappointed. They looked disjointed and there was little co-ordination between the midfield and the forwards. Basics like trapping, too, seemed poor. At this level, a coach cannot be expected to correct such basic problems.

In fact, the defensive lapses did not show up in the scoreline, only because Pakistan made a hash of too many chances. As a result, the match appeared close in terms of the scoreline, but the truth is Pakistan had a better plan, but poor finishing.

India missed some penalty corners and did not even show any method in the attacks. I fail to understand why the players are not moving fast. Even when they have space, they do not move up and create a move.

Keeping possession is very important, and once a rival team's move has been thwarted, the idea is to gain space and convert that into a meaningful attack. Instead, we are losing the ball and once again giving the advantage to the rival.

Agreed, this is a young team, but the fact is that this team has many players who have come from junior ranks and have done well at the international level.

Many of them might even be going to the Junior World Cup next year. Such mistakes and lack of ideas cannot be pardoned at such high levels of competition.

All we can hope for is that lessons learnt from this tournament will be used in the right earnest instead of making some players the scapegoat as has happened in the past.

India's third loss in four matches keeps them in the fourth place among six teams. The Pakistanis with their third win share the second place with Spain. Holland with an all-win record look favourites to defend their title.

India should beat New Zealand, whose sole point has come from a draw with Germany, who also got their first points from the draw.

India could well end up fighting for the third-fourth place and it could well be against Pakistan, as it happened last year in Amsterdam.

Finally a word on Sohail Abbas. This sharp shooter, who is now the world's highest goal scorer, also has the record for highest number of goals in Champions Trophy.

Interestingly, both the records have come against India. He equalled the world record against India in the recent India-Pakistan Test series and now this landmark.

This drag-flick specialist once used to spend most of his time on the bench and came into the game only for set pieces, but now he is an integral part of the team, having being the highest scorer in tournaments like the Athens Olympics, Azlan Shah tournament and also the recent India-Pakistan series.

It is he who has often made the difference for Pakistan even in a mediocre match. How one wishes India had a star player like him.