India is the place to be? This is the mystic East where, as Gita Mehta might have described, politicians once topped the philosophical charts and beggars are now chauffeur-driven to their bastis.

The border looked impressive from the air, stretching away into the night and separating one set of cricket lovers from the other—over 700 km of lights. Arriving after an eight-year gap, stepping through the human barricades, each vying to get your backside onto the rear seat of their taxi of course, and touching the earth of mother India. Sigh! 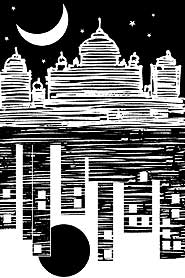 Well, what to say, it’s great to be back? Sure, especially when things that took months or years now take hours, like getting a mobile! Or getting mobile around the city—10 minutes to Chandni Chowk and the heart of Old Delhi on a Metro that puts London or NYC to shame, wah bhai wah, and an ever-hungry Sardar friend to sample the biryani from every one of the dhabas nestling up to the Jama Masjid.

But how much has really changed, I wonder. Do the new hi-tech currents have much impact deep below the surface? Is all this globalised hot air just being absorbed with the enormous appetite for assimilation that India has demonstrated throughout its history, leaving mere cosmetic pockmarks on an eternal surface? Perhaps these thoughts are immaterial in areas where practical materialism abounds, as it does in the rush of urbanity, and we, like any other nation, are but a collection of individuals struggling to survive, and, if lucky enough, to entertain ourselves. The bazaars haven’t changed and the DTC buses are still road hogs even if they run on CNG. There is a palpable pride however, optimism-burgers at McDonald’s and nationalist-dosas at Sagar’s, although not quite a la George Bush. People seem happier to share a national identity, and unless I’m dreaming, Hindi seems to be asserting itself after being confined to a sidekick role at the helm by an anglophile upper class.

I managed to cross that border I saw from the skies. Wagah and Faisalabad, glimpses of a Pakistani Punjab— inspiration for much of Delhi’s post-Partition Punjabi nature. The match was a high-scoring draw, there wasn’t much vegetarian khana around and it was obvious that comparing technical developments and infrastructure is an obsolete activity practised only by autodelusionists. However, the pace of life was more leisurely, the language flowery with embedded etiquette and the instinctive habits of hospitality— qualities of the mythical ‘old’ Delhi that poets dream about!

But who wants a sob story of yet another phoren-return putting on airs and sticking Marlboro in top-pocket? Humph, how about an inversion of that concept, for haven’t you heard, India is the place to be? This is the mystic East where, as Gita Mehta might have described, politicians once topped the philosophical charts and beggars are now chauffeur-driven to their bastis. Even the Goras are beginning to admire our muscles as they seek out the hi-tech gyms of Bangalore and Hyderabad instead of the ancient cocktail of pot and mystic buggery on the beaches of Goa.

I eat my paneer and take a drag on my Gold Flake, remembering that everything is an illusion anyway. Even the fact that it’s great being back.