9/11 proves to be a a memorable day for the team as Monteiro comes home with a point at the eighth position while Karthikeyan finishes just three places behind. Updates 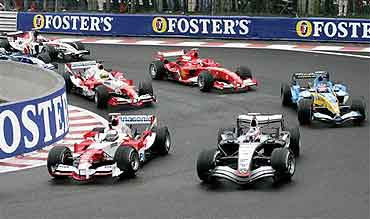 9/11 proved to be a memorable day for Team Jordan as Tiago Monteiro came home with a point at eighth position while Narain Karthikeyan finished just three places behind in an action packed Belgian Grand Prix.

Kimi Raikkonen continued the McLaren domination by winning a race on a track made treacherous by heavy rains and put to test the teams' tactical acumen and drivers' racing skills.

Juan Pablo Montoya dented McLaren's challenge in the battle for the constructor's title after a collision with a backmarker with two laps to go and let go a second place finish.

Ferraris proved yet again they have the car to more than compete in the wet conditions with Rubens Barrichello coming fourth.

Seven-time world champion Michael Schumacher, however, had to endure another nightmare when Takumo Sato in Toyota banged from the rear and put a premature end to his race.

But the Jordan drivers stole the show, thanks to some brilliant race strategy and sensible driving by Monteiro and Karthikeyan.

Monteiro benefitted from a car that was quicker than his teammate's but the 28-year-old Indian made up for the difference in speed with some daredevil racing.

Karthikeyan was pushed on to the grass after being blocked by former world champion Jacques Villeneuve when the Indian tried to pass him at a right hand turn from the outside. But the Chennai lad showed great control as he refused to take the foot off the accelerator and still emerged ahead of Villeneuve.

But more than Karthikeyan's brave move, his Jordan crew would be pleased by the fact that their new EJ15B was quicker than Sauber, they were racing on wet tyres though.

Montoya led from the pole before Raikkonen's better pit-stop strategy took him ahead of his teammate in the race position on lap 33.

The Colombian, however, was unlucky to suffer a fate similar to that of the previous race when he collided with Antonio Pizzonia in the closing stages.

Alonso benefitted from Montoya's exit since his Renault was clearly lacking the power to challenge McLaren as it did in the initial phase of the season and every point he gained sustained the lead over Raikkonen.

The Finn now has six wins for the season, the same as Alonso, and 25 points separate the two with three races to go.

Giancarlo Fisichella was the first to crash out in the 11th lap at the Spa which was hit by heavy rains in the morning.

Schumacher was hit by Sato just when the Ferrari was beginning to challenge Alonso.

David Coulthard in Red Bull Racing retired on lap 18 while Jarno Trulli in Toyota hit the wall on the 35th lap.

'I Am Aiming For Victory'