Jihadi groups hope that mass killings and communal terrorism directed at Hindus would help realise a sundering of J&K. But Hindus are not the only victims of Islamist terrorism. In 2005, 435 of the 489 civilians killed by terrorists were Musli 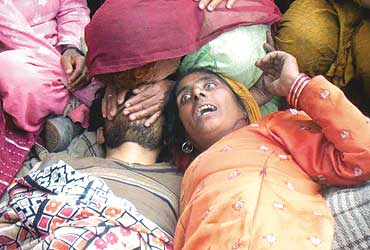 For the most part, the war in the high mountains of Jammu and Kashmir (J&K) remains invisible: it is war that seems to have neither perpetrators nor victims. But strung along the banks of the Tawi river in Jammu, if one cares to look, are the makeshift homes of hundreds of refugees, both Hindu and Muslim, who have fled the Islamist assault that has torn apart communities on the Pir Panjal range. Their stories, though, rarely figure outside of the antiseptic press releases issued by the J&K Police each evening.

Until, that is, there is a large enough massacre.

Last month, the invisible war once again made its way into newspaper headlines when thirty-two Hindu villagers were killed in two separate communal terror strikes in the Districts of Doda and Udhampur, north-east of Jammu. Nineteen residents of the mountain hamlets of Kulhand and Tharwa, including an eight year old girl, were shot dead outside their homes late in the night of April 30, 2006. A further thirteen shepherds were shot dead north of the Lalon Galla, a high-altitude meadow above the town of Basantgarh.

Witnesses say that a group of six terrorists arrived in Kulhand and Tharwa at around 11:00 PM on April 30. Men from some forty adjacent buildings were ordered to gather at the home of Gopi Chand, the village headman. Once there, the victims were made to form a queue, and then fired on with assault rifles at point-blank range. The terrorists continued to fire until their ammunition was exhausted. Ten people were seriously injured, and survived only because the bodies of others had fallen over them.

Hours before the killing began in Kulhand and Tharwa, a separate terrorist unit kidnapped two shepherds near Lalon Galla. Mohammad Siraj-ud-Din and his son Rukun-ud-Din were ordered to guide the terrorists to a nearby dhok, or meadow, on which Hindu herdsmen from the village of Basantgarh had set up camp for the summer. Once there, the terrorists marched the thirteen men they could find into the forest. Four of the victims were shot near the meadow where they were kidnapped; nine others a short distance away.

Neither set of villagers were expecting trouble. Kulhand residents, like many Hindus in Doda, had for long maintained a quiet peace with terrorists operating in the area. When Village Defence Committees were set up in the area after a series of massacres in 1998-1999, local residents refused weapons and training. A police post was set up in the village four years ago, but removed after villagers insisted that its presence was more likely to provoke terrorist retaliation than protect them from harm.

On the night of the massacre, Kulhand residents had not anticipated trouble. The men who were marched out of their homes thought the terrorists needed help hauling supplies up the mountains, a task for which they had used villagers at regular intervals. Many could have escaped into the darkness �" but saw no reason to do so. The shepherds at Lalon Galla, too, marched willingly into the jungles with the terrorists, perhaps thinking that their labour was needed to build a hideout or bury weapons and ammunition.

What evidence is available so far suggests that the killings were the work of the Lashkar-e-Taiba (LeT) - the Pakistan-based terrorist group responsible for sixteen similar massacres in J&K since 1993, in which at least 150 civilians have been killed. Notably, Siraj-ud-Din and Rukun-ud-Din identified one of the terrorists who carried out the Lalon Galla killings as Aijaz Ahmad, a long-standing Lashkar operative who hails from the village of Raichak, near Basantgarh.

Both massacres are thought to have been executed on the orders of 'Abu Talha,' the Doda-area 'divisional commander' of the Lashkar who is so far known only by his nom de guerre. Of the six terrorists who actually carried out the killings, four have been identified �" 'Ashraf,' who also uses the alias 'Omar,' 'Doctor Shabbir' alias Asghar, 'Saifullah,' and 'Ahram' alias 'Abu Din.' Investigators are also examining the role of Hizb-ul-Mujahideen (HM) commander Mohammad Asraruddin, who has often worked closely with 'Abu Talha.' Believed to be a Pakistani national, 'Abu Talha' narrowly escaped a May 5, 2006, encounter which claimed the life of his lieutenant, 'Abu Akasha'. Police and army personnel also made fire-contact with the terrorist group thought to be responsible for the Udhampur killings the same day, but without success. While elements of both groups will more likely than not be eliminated in coming weeks, given the scale of operations directed at them, little is known about the motives behind the twin massacres or their timing.

Some of these motives, however, appear obvious. Prime Minister Manmohan Singh was scheduled to meet with the All Parties Hurriyat Conference (APHC) chairman, Mirwaiz Umar Farooq less than forty-eight hours after the killings. Prime Minister Singh is also to hold a round-table conference involving all major political parties at Srinagar on May 25, 2006. Jihadi organisatiowns, ho do not wish to join in the dialogue process have no interest in its perpetuation.

Terrorist groups have long used death as an instrument to derail efforts towards detente. In August, 2000, a month after the pro-dialogue HM 'commander' Abdul Majid Dar declared a unilateral ceasefire, cadre from his organisation and the Lashkar carried out a series of communal massacres in an effort to sabotage the movement towards peace. In less than 48 hours, starting with the massacre of 30 pilgrims near the shrine of Amarnath, six strikes were carried out in the districts of Anantnag, Doda and Kupwara.

Such a direct link may, however, be simplistic. Communal massacres long predate peace efforts in J&K. After targeting prominent members of the state's Pandit minority for assassination and intimidation in the first phase of jihadi violence, terrorists began executing large-scale killings from August 1993, when thirteen Hindus were massacred at Sarthal, in Doda. Three years later, sixteen Hindus were again executed in the Doda village of Barshalla. Local feuds over grazing rights often facilitated the violence.

From 1998, communal massacres gathered momentum and scale. In 1998, 132 civilians died in six massacres conducted across the State and in adjoining Himachal Pradesh. After a lull in 1999, the massacres resumed in 2000. In 2001, 108 people were killed in 11 major incidents, while 83 people were killed in five incidents in 2002. Most of these killings targeted desperately poor communities in the State's more remote mountain regions: the bridegroom whose wedding procession was targeted in Chapnari did not even possess sandals.

Although the scale of communal terror strikes diminished after 2002 - a fact Bharatiya Janata Party president Rajnath Singh omitted to mention when he called for the imposition of governor's rule after the killings - periodic attacks continue. Just in October 2005, a unit of the HM's 'Pir Panjal Regiment' targeted two hamlets in Rajouri's Budhal area for such attacks. While women in the village were ordered to prepare food for the terrorists, eleven Hindu men aged between 18 and 57 had their throats slit one by one.

One motivation for this gruesome campaign has been to bring about large-scale migrations of Hindus from Muslim-majority areas north of the Chenab river. Jihadi groups hope that mass killings and communal terrorism directed at Hindus would help realise a sundering of J&K along ethnic-religious lines. As such, communal massacres are an instrument to replicate the communal logic on which the Partition of India was based - Pakistan's long-standing aspiration.

Partition-based ideas have emanated, in recent years, from the United States of America-based Kashmir Study Group and Pakistan's back-channel negotiator during the Kargil war, Niaz Naik. Pakistani President Pervez Musharraf's calls for a division of J&K into seven separate provinces, although couched in language based on geography rather than religion, would have much same effect if implemented. Mirwaiz Farooq of the APHC, interestingly, presented all these ideas to the Prime Minister during their meeting.

Notably, however, Muslim villagers opposed to Islamist terror groups have also faced savage assault. In 2001, for example, fifteen Muslim villagers, including seven children, were executed at the village of Kot Charwal in Rajouri, for having set up a self-defence group to keep Islamist terrorists out of the area. Muslim Village Defence Committee (VDC) members and others hostile to the jihad have regularly been targeted since. In January 2006, Rashid Begum and two members of her family were killed in Arnas for campaigning against the Hizb.

Despite the high media impact of communal killings of Hindus, internal Union Home Ministry data makes clear that Muslims are the principal victims of the jihad that Islamist groups are fighting in their name. In 2005, for example, just 54 of the 489 civilians killed by terrorists were Hindu. In most years since 1989, less than 15 per cent of overall civilian fatalities have been Hindu. Only in 1990 did that figure cross 20 per cent, a figure considerably lower than Hindu representation in the State's population.

It would be mistaken, therefore, to see communal massacres as a means to an end: in the Lashkar's world view, they are the end. Lashkar ideologues see the conflict in Jammu & Kashmir as a consequence of the fact that, as one of the organisation's articles suggests, "the Hindus have no compassion in their religion." In the world of Hafiz Mohammad Saeed, the overall head of the Lashkar, "the Hindu is a mean enemy and the proper way to deal with him is the one adopted by our forefathers who crushed them by force."

All who stand in the way of the creation of the Lashkar's utopia are legitimate targets, simply by virtue of their existence. Part of the answer to this challenge lies within India, both through providing better security cover to remote mountain communities and, more important, in pushing political parties to work towards building a genuine consensus against communal chauvinism. As long as the Lashkar's base camps in Pakistan remain active, though, both these measures will only be palliatives - and weak ones at that.