The 1,10,000 capacity stadium is set to host its first international match -- the Day/Night pink ball Test between India and England from February 24. 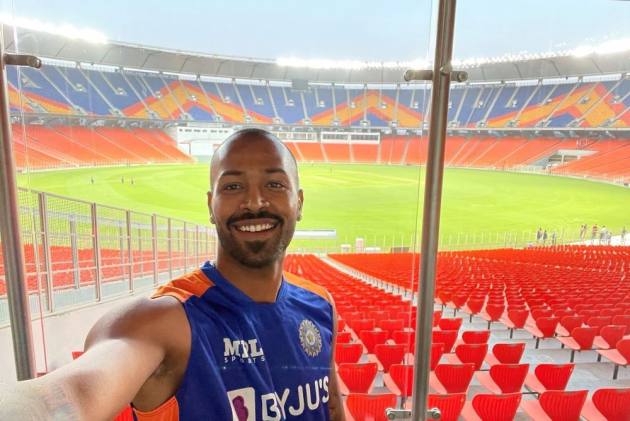 India's globe-trotting cricketers were astonished by the sight of the world's biggest stadium in Motera as it took them an hour to get used to the facility whose dressing rooms are connected to the gym. India-England News | Cricket News

The 1,10,000 capacity stadium is set to host its first international match -- the Day/Night pink ball Test between India and England from February 24.

How good is that view for a nets session ðÂÂÂðÂÂÂ#INDvENG #TeamIndia @Paytm pic.twitter.com/v0sfOMfzHp


"To be honest, to be in the word's largest stadium, we actually cannot wait to have the fans around and see the atmosphere, which will be tremendous," said flamboyant all-rounder Hardik Pandya in a video posted by the BCCI.

"All the boys loved it, I think, for us, it took almost one hour to get used to the size of the ground, the kind of facilities it has provided us, I feel really, really proud that we have this in India, where we can host so many people and we can have wonderful games here."

"I can't thank the GCA enough and all the people who have worked really hard to make a stadium so wonderful that we can't wait to actually come back again and play here."

It feels surreal to be out here at the world’s largest cricket stadium, Motera.


The four-match Test series is tied at 1-1 after India made a strong comeback with a resounding 317-run victory in the second match in Chennai.

Speaking about the new stadium, India number three Cheteshwar Pujara said, "It's an amazing feeling, it's a huge, huge stadium and we all are looking forward to playing our first pink ball Test at Motera."

"It's an amazing ground with big dressing rooms, it's quite spacious and we are enjoying the facilities out here."

He also spoke about the gym.

"The gym is next to the dressing room so you know it's very useful for guys who want to train in between the game or whenever there is time. Gym is excellent, it's quite spacious and we did our first gym session here today and we had a good time."

The stadium will also host the fourth and final Test between the two countries.

Opener Mayank Agarwal said, "To enter Motera and see the stands, the way it's built, it's fantastic. It's a massive ground, never before have we played in such a big ground and it feels great.

"We came specifically to the ground today just to have a gym session and a few of us wanted to run. We have never seen an association having a gym facility like that, it was a pleasure training here."

The promising Shubman Gill, who has impressed in the chances he has got so far, said, "It's such a proud moment for all of us, the world's biggest stadium is here in India. Facilities are excellent and everything is spacious, it's huge."