In which the dancer, actress, choreographer, creative head of a TV channel, anchorperson, columnist, activist, celebrity ... makes a comeback 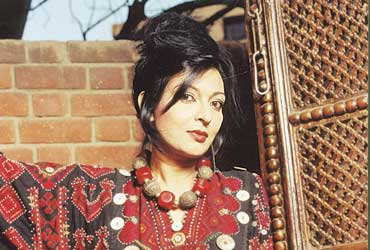 May was a month of homecoming for actress/dancer (depending on where you see her, on screen or on stage ) Mallika Sarabhai. She was in Kerala, her native state, for a stint before the movie camera after a long hiatus. You chase her down to an old house in Allapuzha where she has been learning and delivering lines written in a long forgotten language (her own) - Malayalam.

What emerges first from the gloomy hallway of the house is the grey hair, so dishevelled that she would look like an old dishrag, were it not for the natural dancer’s grace that's fighting it out with the wrinkles on her forehead. For the moment Mallika Sarabahi is unaccompanied, but for one prized decoration - the role of Retd Professor Bhargaviamma in T.V. Chandran’s new Malayalam film Dani.

"I was to be Soosanna, but I hurt my leg and had to shelve it. Now I am Bhargaviamma in Dani," Mallika cannot conceal her joy. She is well aware of the fact that a role in T.V. Chandran’s movie is a scratch-and-win-ticket to awards. It is this knowledge that gives her voice a bubbly tang.

Soosanna, the role she missed, brought Vani Vishwanath very close to the national award for best actress this year. It did fetch the glamour girl critical appreciation in plenty. The movie got the state’s special jury award for 2000.

"It was not the fear of a negative role that prompted my rejection of the offer made by Chandran last year. I have done similar roles before." Mallika has essayed characters in dark hues in films like Kalankini and Muthi Bhar Chaaval. "The courage of a woman to face adversities has enamoured me and the issue of women’s struggle against injustice has been an issue very close to my heart. I have touched this topic many times before in my dance dramas," she declares.

"I am always learning and I could not give up this opportunity to hone my acting skills." Does it mean that she is bidding adieu to the world of dance? " Not at all. I got a good role. So I took the plunge," she says reminding us that this is only a brief interlude from the busy life of running her dance school (Darpana Academy of Dance) and heading a TV Channel (Tara Gujarati).

She explains that she stopped acting for want of good roles. Nothing for her compares to her experience of doing Mahabharata. "It changed my life. I lived the role of Draupadi for five years straight. I did it in French with director John Martin’s help. It was a revelation - the total emancipation of woman."

That impression was permanent and has a strong bearing on her personality. Her life is built on decisions marked out for their individuality and utter disregard for what others would make of them. Her marriage, children and relationships -- all of them have been statements of the self.

Mallika’s talent for portraying disdain, an enormous part of her appeal and a gift she deploys with great skill, seldom cuts much deeper than the character of Soosanna, one she had turned down. Soosanna was the tale of a sex worker on the wrong side of forty. In fact, it isn’t much of a transition from the 40-plus Soosanna she wished she had done to the 65-year-old Bhargaviamma she is actually portraying. The premise continues to be a condescension for a society that has rejected the likes of her.

Her role in Chandran’s movie may still rub in some mellowness to her demeanor. Dani tells the story of Daniel Thomson (Mammutty) and the period between the years he lived: 1938 to 2001. He meets Bhargaviamma, a retired professor, at the old age home he is a resident of. The professor’s past is a revelation to Danny whose life has been tumultuous and eventful. T.V. Chandran traces the history of the liberation struggle in Kerala through the lives of the two.

"Bhargaviamma is the old lady Dani meets in the autumn of his life, their relationship and the way it matures. That is the beginning and end of the movie," says Chandran.

"This is the most important role that Mammutty has taken up since Ambedkar. And this will be the most talked about role too," he adds.

Chandran feels that it is much easier to narrate history using historical figures and important characters but to trace history through the ordinary lives of faceless and nameless people is a different ballgame.

Dani is a have-not living in the middle of prosperity. He sits like a bridge between wealth and helplessness. Occasionally, he picks up his saxophone/guitar and plays at funerals with the choir of the local church. A Malayali version of Rudali. The tunes he plays ease the pain of the bereaved and weep for him.

Prof Bhargaviamma walks into his life as if to wipe away those tears. She meets him soon after her retirement. Dani has been a pauper. She, on the contrary, has everything - money, education and children. One after the other, all of them disown her. She discovers Dani whose life like hers was falling apart. They prop each other up for the rest of their lives.

"It is a challenging role," agrees Chandran and is confident of Mallika’s ability to pull it off. "She is a seasoned actress," he comments. Since she made her debut in 1974 at the age of 15 Mallika has acted in several Gujarati movies besides Basu Chatterjee’s Sheesha and the The Thousand Flowers in English.

She is, however, finding it difficult to mouth the dialogues in Malayalam. She has got it all written down in the Gujarati script but the accent doesn’t fit in well. "There will be lot of work at the dubbing stage," Chandran hints of the tough times ahead for Mallika.

With her decrepit profile, tangled accent and ageing aptitude, Bhargaviamma, as conjured by Mallika, may prove to be this year’s most captivating movie heroine.

There is a hint of this prospect in Mallika’s gait as she waves to a reporter of a Malayalam newspaper. She tells him that she is waiting for a fax from her daughter. It is a review of her daughter Ananita's dance performance. Ananita just did her arengatram (debut). One more dancer among the Sarabhais. One more homecoming for Mallika.