ICMR's study is based on 677 clinical samples of individuals who tested positive for Covid-19 despite taking either two doses or one dose of vaccines. 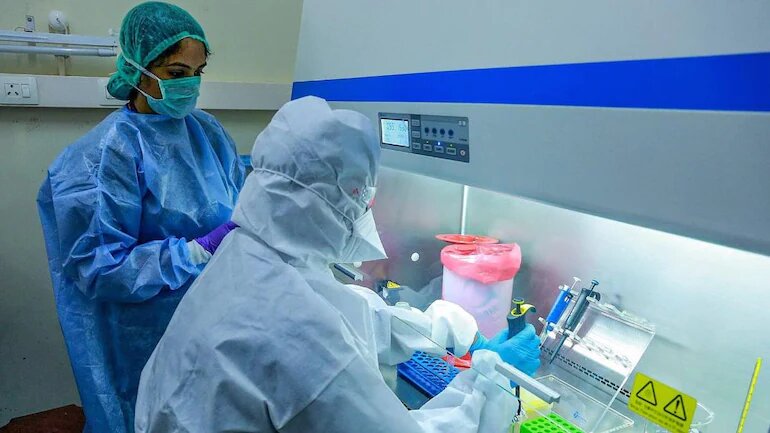 A new research conducted by the Indian Council of Medical Research (ICMR) suggests that the deadly Delta variant of SARS-COV-2 is the primary causative agent of the majority of clinical cases of breakthrough infection of COVID-19.

So far, 9.8 per cent cases of breakthrough infection have required hospitalisation and fatality was observed in only 0.4 per cent cases.

In simple terms, a breakthrough infection is if one gets infected despite partial or complete immunisation.

The study, the largest and first nation-wide study of post-vaccination breakthrough infections from India, said its analysis shows that the vaccination does provide reduction in hospital admission and mortality.

"Therefore, enhancing the vaccination drive and immunising the populations quickly would be the most important strategy to prevent further deadly waves of the COVID-19 and would reduce the burden on the health care system," the study said.

"Delta AY.1 and AY.2 is characterized by the presence of K417N mutation in the spike protein region. K417N, E484K, L452R, and E484Q are the mutations known to disrupt receptor binding domain (RBD) binding capacity and make them more infectious by immune escape mechanisms against the current vaccines. This indicates improved virus fitness to evade immune responses and survive against the vaccines," the study said.

For the study, the Indian Council of Medical Research (ICMR) collected 677 clinical samples (throat swab/nasal swabs) of individuals who had received two doses and one dose of vaccines (Covishield and Covaxin,) and tested positive for COVID-19, from 17 states and Union Territories of the country.

This study indicated that the majority of the clinical cases in the breakthrough were infected with the Delta variant and only 9.8 per cent cases required hospitalization while fatality was observed in only 0.4 per cent cases.

"The overall majority (86.09 per cent) of the breakthrough infections were caused by the Delta variant (B.1.617.2) of SARS-CoV-2 in different regions of India except for the northern region where the Alpha variant predominated," the study said.

In the study, 67 cases (9.8 per cent) required hospitalization and fatality was observed in only three cases (0.4 per cent).

The study found that southern, western, eastern and north-western regions of India predominantly reported breakthrough infections from mainly Delta and then Kappa variant of SARS-CoV-2.

Out of the 677 patients analysed, 85 acquired COVID-19 infection after taking the first dose of the vaccine, while 592 were infected after receiving both doses of the vaccine.

A total of 482 cases (71 per cent) were symptomatic with one or more symptoms, while 29 per cent had asymptomatic SARS-CoV-2 infection.