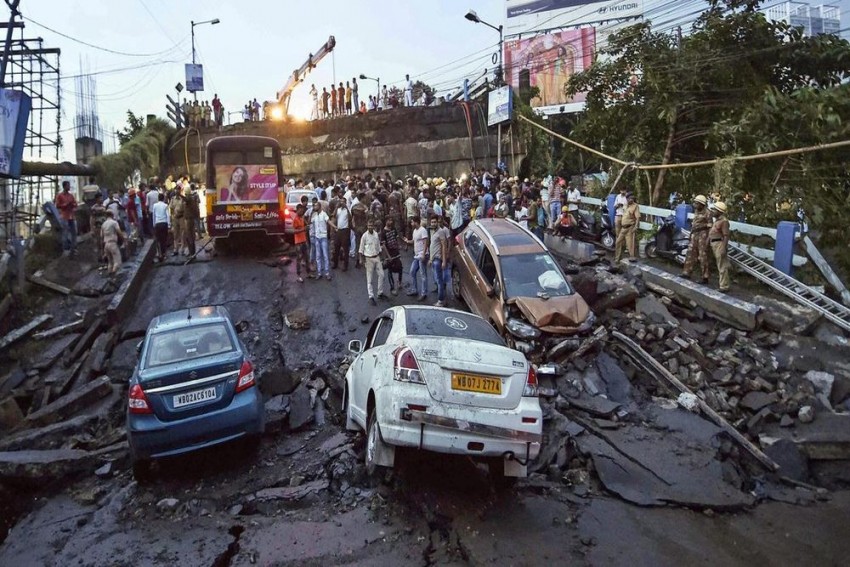 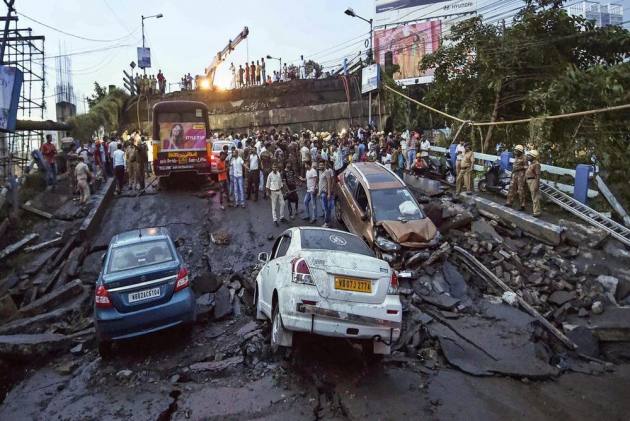 Some people could still be trapped under the debris of the fallen Majerhat bridge, officials said on Wednesday, stepping up search and rescue operations a day after a portion of the 40-year-old structure in south Kolkata collapsed.

A part of the bridge on the arterial Diamond Harbour Road caved in Tuesday evening, killing one person, trapping several people and crushing many vehicles.

Rescuers used drillers and cutting machines to barrel through concrete slabs and engaged sniffer dogs to ensure that they reach out and rescue anybody who might be trapped under the rubble.

"There could be a few trapped underneath the collapsed bridge. We are trying to locate them. We are using cutters and drill machines to cut through the concrete slabs of the bridge. Till now, we have been unable to locate anybody. We are trying our best," an official of the rescue team said.

The area near the site has been dug up for a metro railway project and construction material is strewn all over the place.

Labourers working on the metro project claimed two of their co-workers, who were probably inside a temporary shelter underneath the bridge, are missing.

Rescue work by the Kolkata Disaster Management Department, the National Disaster Response Force (NDRF) and the state fire department continued through the night.

The bridge in \Rcrowded Alipore area runs over the Majerhat Railway Station and connects the city centre with the heavily populated Behala, vast areas of the southwest suburbs and neighbouring South 24 Parganas district.

Police said Tuesday evening that 27-year-old Soumendu Bag had died in the collapse while 21 people, including three women, were injured.

An official of the Kolkata Traffic Police said, "We expect traffic jams because the Majherhat bridge has collapsed. It is the main link between Behala and the further south areas of South 24 Parganas district.

Tram services have been completely suspended along CGR Road-DH Road and Judges Court Road, he said.

With the area virtually out of bounds, traffic was diverted away from the Diamond Harbour Road, affecting thousands of people.

Traffic snarls were reported at various points. The situation is likely to worsen as the day progresses.

West Bengal Transport Principal Secretary B P Gopalika said additional state buses have been pressed into service to mitigate the problems being faced by the people in these areas.
"Wherever there will be need for more buses, we will provide," he said.

Oishiki Mukherjee, who travels to her college at Park Street from Behala, said the long distance and excess travel time that may continue for months, will impact her studies.

BJP MP Roopa Ganguly visited the site Wednesday morning. Blaming the Trinamool Congress-led government for the collapse, she alleged the bridge was not maintained properly.

Chief Minister Mamata Banerjee, who is now in Darjeeling, is expected to return the city today and visit the site.

On March 31, 2016, a 150 m (490 ft) steel span of the under-construction Vivekananda flyover in the Girish Park neighbourhood of Kolkata, India, collapsed. At least 25 people died and more than 80 were injured in the incident.

On March 4, 2013, a road bridge had collapsed in Ultadanga area in the northern part of the city. There were no casualties.