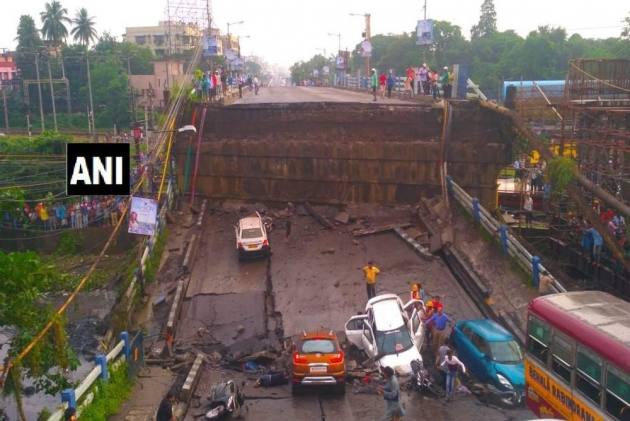 The Majerhat bridge reportedly collapsed around 4:45pm. The area has several under-construction buildings nearby.

While police confirmed the death of one person, fire brigade personnel engaged in the rescue work said 25 injured were pulled out from the rubble.

The injured have been admitted to SSKM and CMRI hospitals, the police said.

State minister Chandrima Bhattacharya said she has heard about the death of five persons in the incident but it was yet to be confirmed.

Minister Firhad Hakim said six people have been admitted to the hospital.

As crowds gathered at the spot in congested Alipore locality, where mangled cars were buried under the debris of the bridge, Chief Minister Mamata Banerjee said the first priority is to rescue the injured and those who are trapped.

An eyewitness said some people in a minibus and private cars were trapped.

EMU local train services were suspended from 4.45 pm owing to the collapse of a portion of the bridge, the official said.

"The collapse of a part of a bridge in Kolkata is deeply unfortunate. My thoughts are with the families of the victims. I pray that those who are injured recover at the earliest," Modi said in a tweet.

On March 31, 2016, a 150 m (490 ft) steel span of the under-construction Vivekananda flyover in the Girish Park neighbourhood of Kolkata, India, collapsed. At least 25 people died and more than 80 were injured in the incident.