The bills have provisions for higher than MSP rate for produce in farming agreement with traders, timely payment of dues, three-year jail term and Rs 5 lakh fine or both for harassment of farmers. 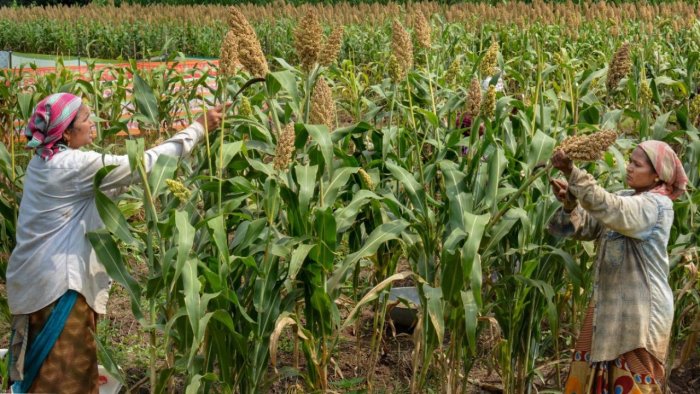 Aiming to counter the new farm laws enforced  by the Centre, the MVA government of Maharashtra on Tuesday have introduced three amendment bills in the assembly in connection to agriculture, co-operation, food and civil supplies,

The laws enforced by the Centre are facing a massive resistance from a section of farmers.

The bills have provisions for higher than MSP rate for produce in farming agreement with traders, timely payment of dues, three-year jail term and Rs 5 lakh fine or both for harassment of farmers.

They also have provisions to give power to the state government to regulate and prohibit production, supply, distribution and impose stock limits on essential commodities.
Revenue Minister Balasaheb Thorat said the central farm acts were passed without discussion and several of their provisions encroach on rights of state governments.

"The state government has right to make laws and we want to suggest amendments to the central agriculture laws which we feel are anti-farmer," he said.
The bills which have been placed in public domain for two months for suggestions and objections are - Essential Commodities (Amendment), Farmers (Empowerment and Protection), Guarantee Price; Agriculture Related Agreements (Maharashtra Amendment) and Amendments to Central Government Farmer Produce Trade and Commerce (Promotion and Facilitation).

The draft bills have been prepared by a cabinet sub-committee headed by deputy chief minister Ajit Pawar.

Pawar said the draft bills will be in public domain for two months during which all stakeholders can hold discussions and debates on their provisions.

The bills will be taken up for discussion and passage during the winter session of the legislature in Nagpur (held in December), he said.

Agriculture Minister Dada Bhuse said farming agreements (between traders and farmers) will be considered invalid if the price of agri produce being offered is not more than the MSP (minimum support price).

If the farmer is not paid in seven days of sale of his produce, a criminal offence can be lodged against the trader and punishments include three year in jail and Rs 5 lakh penalty, Bhuse said.
Co-operation minister Balasaheb Patil said under the central acts, there is no control over trader in case of a default in payment to farmer after sale of agriculture produce.

To ensure farmers get remunerative price for their agriculture produce within time and to protect their interests, the state government has decided to amend the Centre's Farmers Produce Trade and Commerce (Promotion and Facilitation) Act in its application to Maharashtra, Patil said.

The draft bill proposes that no trader shall trade in any scheduled agri produce unless he has a valid licence from the competent authority, Patil said.

For harassment of farmers punishment is not less than three years imprisonment and fine of not less than Rs 5 lakh or both, he said.

Food and civil supplies minister Chhagan Bhujbal said in the Essential Commodities Act, 1955 - which has been amended by the Centre - there is no provision for the state government to regulate or prohibit production, supply, distribution, imposing stock limits under extraordinary circumstances which may include famine, price rise or natural calamity.

He said the state government proposes to amend the act in its application to Maharashtra and assume power to regulate and prohibit production, supply, distribution and impose stock limits.