Lunar Eclipse Tonight: Here's All You Need To Know About Blood Moon

The eclipse will also coincide with the closest approach of Mars to Earth. The Nehru Planetarium in New Delhi will organise a 'Moon Carnival' on Friday. 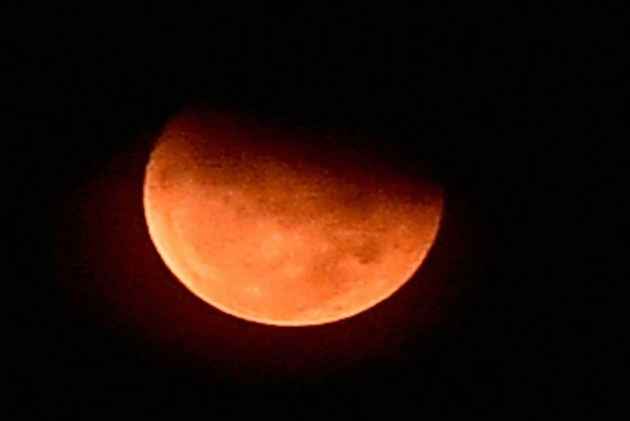 Friday lunar eclipse is tipped to be the longest in the century and planetariums across the country have made elaborate arrangements for enthusiasts, but rains and cloudy skies are likely to play a spoilsport, astronomy experts feel.

The eclipse will also coincide with the closest approach of Mars to Earth. The Nehru Planetarium in New Delhi will organise a 'Moon Carnival' on Friday.

N Ratnashree, the director of the Nehru Planetarium, said besides arranging five telescopes, the centre has also organised lectures pertaining to the eclipse. Amateur astronomers have also volunteered to guide people about the eclipse, she said.

"But all this is subject to the rains and cloudy sky. There is already a lot of enthusiasm among people," Ratnashree added.

The Astronomical Society of India (ASI) cautioned against creating a hype around this event.

"For serious astronomers, this event does offer an extraordinary opportunity to study Mars through their telescopes. However, a layman who might expect to see dramatic details of the surface of Mars would probably be disappointed," it said in a statement.

"Since we are in the middle of the monsoon here in India, the sky is likely to be cloudy," it said.

"People in Jammu and Kashmir, and Tamil Nadu are most likely to be able to witness the event clearly," Aniket Sule, Chair of the Public Outreach and Education Committee (POEC) of ASI, told PTI.

On Friday night, the total lunar eclipse will coincide with another relatively rare celestial phenomenon known as the Mars opposition.

Ratnashree said the Moon would enter the penumbral shadow of the Earth at about 10.53 pm IST. Nothing much will be noticeable to the untrained eyes for next 30-40 minutes. After that, one might notice gradual change in the brightness on the lunar disk.

By 11.54 pm, the Moon will enter the umbra of the Earth's shadow. The dark shadow will now be seen progressing on the lunar disk. This will be quite noticeable to the naked eyes.

"At 1 am of July 28, the Moon will be completely inside the umbra of the Earth. At this time, the colour of the lunar disk will be red with it's many hues - crimson, brick red etc. The time of the maximum eclipse is 1.51 am. The total phase of eclipse will end at 2.43 am, it will be out of umbral shadow by 03.49 am and completely out of penumbra at 5 am. The eclipse will last for 103.6 minutes," Ratnashree said.

Mars will rise around the sunset time and will set around the time of sunrise. An opposition happens when Mars is the closest to Earth in its orbit, both on the same side of the Sun.

The red planet will appears brighter and bigger than usual. Though the opposition of Mars is tomorrow, it comes closest to us on July 31. This curious fact is because the orbits of all planets around the Sun are not a perfect circle, but an ellipse.

Due to this, the closest approach of Mars to us will occur four days later than its opposition. This is also one of the reasons why the distance between Mars and Earth is not the same during every opposition.

The distance between Mars and the Earth ranges between about 400-million kilometers (2.7 Astronomical Units, or AU) and 56-million km (0.38AU). The closest approaches occur during opposition.

In technical terms, the angular diameter of Mars as seen from the Earth will be more than 24" and it will be brighter than -2.75 magnitude.

For comparison, the brightest star in the night sky, Sirius, will be about 3 times fainter than Mars on that day and the average angular size of the moon is 1,800.

Even at the closest approach, Mars will seem small. It would take a telescope equipped with a lens or mirror that is at least six inches in aperture to discern even the major surface features of Mars.

Nonetheless, it would be an exciting opportunity to view the bright red planet right next to the red (eclipsed) Moon on that night.