'Life Is Too Short'

Sir Vidia does it again -- after calling the US ambassador's wife "foolish and illiterate", bristles at the "harping on issues of English being the language of the colonisers and gender oppression and things like that", provoking Ruchir Joshi to call 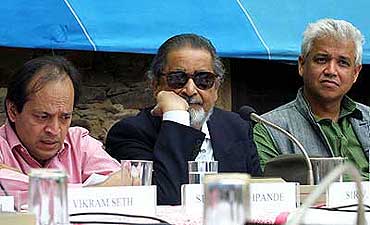 All right, so let's admit, first off, that this is all hearsay. We weren't present there and haven't spoken to those of us who were, if you will pardon the first person plural, first hand, as yet. But from all accounts, and many garbled cellular phone discussions later (Excited me: "What, he slapped her?" "No, no, aiyyo, slammed her. Yem Yem, not pee pee," snaps the voice at the other end. "Ah, I see". Dejection.), all that we can say with certainty is that Sirji was at it again, today.

So, the facts then, such as they are, from the various accounts available so far.

The venue: Neemrana, where ICCR's select few invitees have been gathered for At Home In The World. (Mahasweta Devi pointedly refused to attend, though she happens to be in Delhi for the Sahitya Akademi awards, we should mention here, calling it "an event for the partying and networking crowd", far removed from her writings or interest)

The scene: A panel discussion on: Midnight’s Children: The Weight of History (Shared histories; issues of colonialism and relationship with the past, gender, class, politics, history and the writer’s place in society …)

So what really happened, you want to know? So okay, see, Nayantra Sahgal apparently was holding forth with her considered views on the influence of colonialism on Indian literature when Sir Vidia seems to have suddenly lost it.

"Why do you keep drumming up the issue of colonialism?" he apparently interjected. We do not know whether it was an honest and innocent query engendered out of sheer curiousity or whether he actually "snapped" and "lost it", as one report puts it.

Now it is conceivable Sirji may not have gone through the programme-sheet which spelt out what the morning session was all about, and a visibly upset Nayantra Sahgal apparently tried bringing this very minor matter to his notice.

But Sirji -- St. Naipaul, if you'd believe Rukun Advani -- apparently was unmoved and came up with a short little impromptu harangue: "Fifty years have gone by. What colonialism are you talking about? Give me a date. Otherwise it's like dancing in the air. It has been more than 50 years since India gained Independence and Indian writers should stop harping on issues of English being the language of the colonisers and gender oppression and things like that ... Banality irritates me. Life is too short. I can't listen to banality. This thing about colonialism, this thing about gender oppression, the very word oppression wearies me. If writers keep talking about oppression, where will they get the time to write?"

Now where did gender oppression enter the picture, you might want to know? See the programme-sheet, stupid! Okay, let us provide you with the stuff in the parenthesis once again: "Shared histories; issues of colonialism and relationship with the past, gender, class, politics, history and the writer’s place in society …"

It turns out that Shashi Deshpande had earlier held forth on her pet peeve - how there is no place for women in the tradition and history of literature ('blah, blah, yada, yada' as a woman participant described it succinctly to us) and how she is forced "to carve out a space" for herself.

"Tell us Shashiji," one of the pesky members of our tribe persisted in the Q&A session, "how does it feel to have your concerns dismissed as banalities?"

Shashiji said that those who had no idea of what she was talking about and have not experienced it themselves would consider it a banality. She also added for good measure that when the subject of writers in exile and their anguish was being discussed earlier, she too had found it "banal".

Almost as an afterthought, she also decided to add that she "had been cool (as against some others who had got all hot and bothered, presumably) because it meant nothing" to her.

(Shashiji seems to have hit two birds with this one -- also managing to get back at the other, though absent, writer in exile and his anguish, who had once called her a "spectre at the feast" and had gone on about her "curdled judgement"? But we digress.)

Perhaps people like you and I, who love gossip and suchlike would have been amused, but apparently the other angry young man, Ruchir Joshi (who, if you really want to know, is Nayantra Sahgal's son-in-law) was not too thrilled when this here little fracas -- or farce -- was playing out. Knowing him a bit, to be fair, it can be safely stated that his reaction was pretty much in keeping with his personality.

"You are obnoxious," he had yelled out at Sirji, asking him to refrain from posing injunctions while Sahgal held the podium. He also appealed to the moderator, bhadralok Amitav Ghosh, to not "permit certain people to monopolise the platform".

On the side, `Suitable Boy' Vikram Seth was seen trying to pacify Sirji; Lady Nadira was hurriedly scribbling and passing on a note to him (we do not know about the syntax and grammar employed yet, though one account has it that it simply said, "don't loose your tamper") but the gathering was denied more insights from Sahgal as her exposition came to an end right there. The bhadralok moderator played it safe, or perhaps thought discretion to be better than valour, and moved on to the next speaker.

All of which left Ruchir Joshi understandably livid and fulminating. He was seen -- and heard -- muttering imprecations (reports are unclear as to choice of vernacular) to himself (and for the benefit of those within earshot): "He talks nonsense. Ignorance should not be combined with rudeness".

Perhaps Sirji's ears could have been tweaked a bit -- at least -- for being such a naughty boy? Afterall, among other things, hadn't Sirji also singled out Pankaj Mishra for praise? (Perhaps we are making too much of nothing but there is also the little matter of some good old fashioned hisaab to be cleared between Ruchir Joshi on one hand and Pankaj Mishra/Sirji on the other. Something to do with a scathing and delightful piece in Tehelka by Joshi that was later withdrawn, because Lady N breathed fire and brimstone, a little bird tells us. No wonder, in some circles, her name, whenever mentioned, is sung out to the tune of the Beatles' Lady Madonna, with some suitable alterations to the words. But we digress. Again. Sorry. We are at your feet.)

Meanwhile, we are informed that Sirji had retained his composure (perhaps the Suitable Boy recited some suitable poem about cats into his ears? We are told that he has had the old cantankerous VSN quite charmed and pleased with his poems. On cats, in particular, of whom he is quite fond), "regretting" that the third and final session of the retreat ended on such an unpleasant note. "There were two good sessions," he patronisingly added. "It is least fortunate that the third shaped up as it did". Indeed not. Where would we hacks be without you, O patron saint? What would give us grist for our gossip mills?

Let us add that we have also heard some unconfirmed rumours about Sirji apologising to Sahgal, but we can't yet swear on it. And to be fair to him which, many would argue, is not really a very fair thing to do, Sirji apparently was objecting mainly to Sahgal using notes to "make a speech" which he perhaps thought was not conducive to a conversation. "Let's keep this a conversation and not a speech," he had added when he reportedly "snapped".

Significantly, Sahgal had spoken about the many factors responsible for "regional" languages not getting their due, which prompted a gruff dismissal from Sirji: "If you can't get readership in your languages, we can't do it for you."

All of this, of course, was in keeping with his inauguration speech, where he had talked about modern Indian writing in English having "given India a true idea of itself than it has ever before" and had joined issue with the prime minister's pieties, arguing that if the regional language authors wrote great works, they would have become popular themselves. We are sure His Salmanness would agree. "Literature comes out of a people and is better judged by the people," Sirji had added insightfully, with a familiar swipe at the courses offered by foreign universities, particularly the American ones.

But LATER today, he did apparently try to make amends by saying that it was an "assembly of nice people". We don't know how the self-professed "not a nice man to know" Khushwant took the description. Many would say that there was at least one other genuine exception.

Watch this space for updates.