'Three wins and one loss in the last week. It was a huge pull for the Indians who were missing quite a few stars in the line-up' 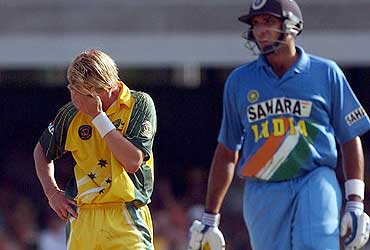 The Indians went through the gruelling week pretty nicely. There were three wins and one loss in the last week so you cannot really fault the team for its efforts. It was a huge pull for the Indians who were missing quite a few stars in the line-up. The lesser players stood up to the task and the Indians are in the final.

I guess there could be a few murmurs because Zimbabwe ran them close in two games and Australia claimed a lost cause at the SCG. But the Indians have played fantastic cricket. It is the nature of one-day cricket to produce close results. Even though its ground fielding does not measure up to overall standards, India's catching has remained exceptional.

Ajit Agarkar has been brilliant and stepped up to the job nicely. Irfan Pathan is a quality cricketer, superb really, for his bowling shows a lot of maturity for a 19-year-old. Once the likes of Zaheer Khan, Harbhajan Singh and Anil Kumble are back and India's batting being what it is, the team has some really good years ahead. Indian cricket could look forward to some really productive years.

V.V.S. Laxman keeps propping up because his batting has got better and better. It has been Laxman's summer even though the two sides have some exceptional batters and most of them have scored heavily. It is the manner of Laxman's run-making, which is so pleasing to the eyes.

Fans in India must already be aware of his capability but to the outside world Laxman has now shown how good he could be. He has done so playing his own game. Having been allowed to come up the order, he has scored his runs playing no differently than he does in Tests. He has played cricketing shots and walloped the bowlers. He is a superb player and it has been a privilege to watch him this summer.

The ball-tampering incident did appear damning on television. But people in the cricketing world should not appear shocked. It has happened all the time in over 100 years of cricket's history. Cricketers have tried to put things on a ball, sunscreen, grease or some sort of substance. It is nothing new.

But that it involves Rahul Dravid, a very popular and respected international cricketer, a very, very straight-sheeter, is causing the muck. It could have been purely accidental but the bottomline is he was caught in the chin.

What the substance does to a cricket ball is debatable. Just keeping the shine on the ball on one side is not enough unless the other side is scruffed up. Only then it makes the ball to behave differently.

Scratching the ball is the really damning thing. You see it in the nets all the time when the ball is scratched up on one side, the other is kept smooth and reverse swing starts happening. I don't think just applying substance and shining one side makes a ball behave abnormally. But Dravid has been caught for doing something really silly.

The other matter is of slow over-rate. Indian captain Saurav Ganguly really needs to address this issue. If the game wants to retain its popularity and grow, it cannot be allowed to get slow. It must keep moving and it is the responsibility of players, more so of the captain, to be alert to the matter.

If you slow up the game, and adopt go-slow tactics, you are liable to be punished. It is not like times in the past. It is now a professional sport, a big business.

Bowlers have to keep a certain pace about their overs, fielders need to be alert and the captain must get things moving. It just cannot be allowed to hurt the paying public or the big business, which runs around the game, only because a team wants to maximize its winning potential.

One keeps coming back to the exceptional batting seen in this series. I doubt if one has seen batting of such sustained brilliance in any Australian summer in recent memory.

Both the Australian and Indian batsmen have been phenomenal. Though it has been enjoyable, the bowlers have suffered and it is time to sit back and try to work out the curve of the game's flow.

Finally to David Hookes, 'Hooksey' to his mates, who lost his life in a senseless accident. He has been very popular in Australia, and dare I say, even in the sub-continent where he was popular in the commentary boxes in recent times.

Personally, he was a close chum from the schoolboy days when we used to get involved in cricket carnivals. To me, he was a great mate and it is just so sad. It will be hard to get over with it soon. 'Hooksey' is gone but he has left behind so many wonderful memories.