The march will be led by senior Left leaders, including Sitaram Yechury, D Raja, Manik Sarkar and others, in the national capital, the parties said in a statement on Thursday. 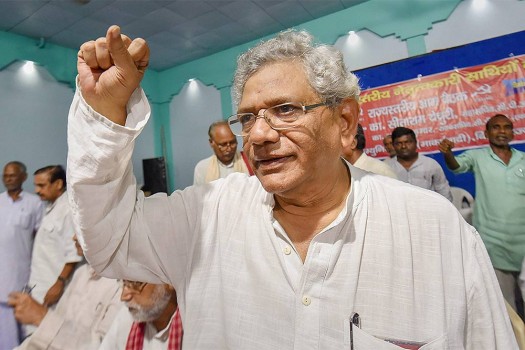 The CPI(M), CPI, CPIML, Forward Bloc and RSP will jointly organise protest marches across the country on July 24 against 'murder' of democracy and violation of human rights and political freedom in Tripura and West Bengal.

The march will be led by senior Left leaders, including Sitaram Yechury, D Raja, Manik Sarkar and others, in the national capital, the parties said in a statement on Thursday.

The parties alleged that politics of violence and terror continued to be unleashed by the ruling BJP-IPFT government in Tripura and the Trinamool Congress government in West Bengal.

"The Left parties strongly condemn this daylight murder of democracy in West Bengal and Tripura and call upon all their units across the country to organise protest actions condemning this barbarity and mobilising the people in defence of democracy, human rights and civil liberties. The Left parties call upon the Indian people to come forward to defeat such fascistic attacks on our Constitution, people's democratic rights and civil liberties," the statement said.

Regarding the political situation in Tripura, the Left alleged that ever since the BJP-IPFT government assumed office in the state, "the CPI(M), Left Front and democratic mass organisations have been the target of the violence perpetrated by the BJP/RSS".

Apart from physically targeting Left cadres, even programmes and events conducted by the party have come under attack, the statement said.

The Left parties also accused the ruling Trinamool Congress in West Bengal for creating an atmosphere of fear, adding that the regime has been maintaining its reign of terror and fascistic attacks against the Left Front since they came to power.

Alliance With JD(U) Will Continue, Will Fight LS Polls On All 40 Seats Together: Amit Shah In Bihar