Learning From A Greek Tragedy

Is the Greek tragedy a tipping point for Europe's future? 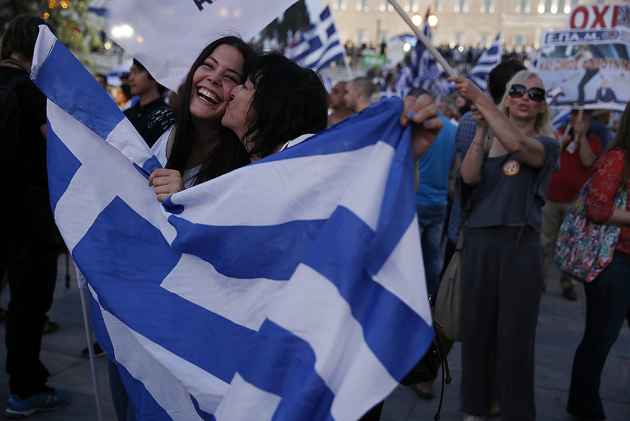 Just as the early results of the Greek referendum were trickling in on July 5, a storm was literally hovering over Berlin providing a perfect metaphor for Europe's latest crisis. Although a tiny country of 11 million, Greece's dramatic rejection of its creditors' terms for a debt bailout has shocked Europe's concept of shared sovereignty and the very edifice underpinning Brussels' claim to govern the continent.

Greece's "nothing to lose attitude"

When a cure begins to kill a patient it is time to change doctors. This is precisely what the Greek people have emphatically chosen. The 2010 Brussels-sponsored and Bretton Woods-inspired austerity strategy to resolve Greece's debt problem merely pushed the latter into a deeper recession and a debt trap that it cannot extricate itself from. The essence of the creditors' proposals involved handing out controlled dollops of liquidity to service previous debt obligations in lieu for Greece radically restructuring its domestic political economy. But the austerity therapy for Greece was structurally designed to rapidly shrink the public sector and constrain fiscal options to pull Greece out of its economic slump. Aggregate demand continued to contract. Since 2010, Greece's unemployment has spiraled to 25 percent and average per capita income fell by 40 percent. Over 50 percent of households now depend on pensions as their primary income source. As one analyst remarked, Greeks "can no longer be cajoled with the threat" of their "predicament becoming worse".

The only hope for Greece's socio-economic future is a rejection of the failed prescriptions of northern Europe and a temporary recovery of its monetary sovereignty, which allows it to devalue the currency and gain some respite via the attendant rise in competitiveness. But Greece also needs foreign investment and access to capital markets to expand or renew sectors with competitive advantage such as minerals, metals, shipping and tourism. Thus, the only possibility for a sustainable path to recovery is a debt relief deal on reasonable terms — effectively one that allows Greece a longer period to recover and repay a substantially reduced debt stock from its current 180 percent of GDP. This is where the calculus of the creditor states led by Germany and France comes into play. Berlin and Paris, although commanding sufficient resources for the Greek case (Greece's GDP is 2 percent of the eurozone's total economy), are anxious to avoid a moral hazard problem that might have a domino effect across southern Europe.

Greece, after all, is only an extreme manifestation of the economic slump and sovereign debt phenomenon in the European periphery including Spain, Portugal and Italy. These larger economies that are socially integral to the EU's wider political identity all represent different fronts of the same problem. The middle classes in these societies are seething with discontent amidst high unemployment as creditors have imposed onerous conditions in debt restructuring packages. The Greek referendum has provided an alternative path to leverage popular discontent into a political bargaining strategy to compel northern Europe to bear a much larger burden of the overall debt crisis. For Berlin and Paris, bailing out Greece may be perilously close to opening a Pandora's box across Europe with similar democratic uprisings negating the authority of Brussels and German-Franco leadership.

The infamous "Grexit" scenario would involve a complete default on Greece's €323 billion debt and an exit from the eurozone — the currency area comprising 18 other countries. Athens would recover its monetary sovereignty — the ability to print its own money — but at a cost of some international opprobrium and high entry costs to access new capital. The immediate upside, of course, would be a cheaper and more competitive currency to propel exports including the tourism sector. At the EU level, a "Grexit" might provide some respite by a Greek defection but at an uncertain future cost of other indebted economies visualising and emulating a similar strategy when their backs finally hit the wall. Insulating the eurozone from a "Grexit" is predicated on the assumption of cooperative middle classes across southern Europe. Elections later this year in Spain and Portugal could very well witness the rise of anti-austerity manifestos dominating the discourse and challenging regimes friendly to Brussels and Germany.

A second scenario could involve Athens, buttressed by a stronger bargaining position after the referendum, extracting more reasonable terms from Berlin in a new negotiated deal. This would require the Merkel regime to make real concessions. The only reason for doing so would be if Germany assumed the burden of system-maintenance and defined its national interests beyond recovering the non-performing loans for its banks. Put plainly, Greece would be deemed "too big to fail" — a mantra also used ironically after the 2008 global crisis when big US and European financial institutions received trillions of dollars and euros in tax payer-funded bailouts because the integrity of the overall macroeconomic system was claimed to be at stake. It is unclear if Berlin and Brussels perceive the present crisis demands a similar response. The rhetoric leading upto and after the referendum suggests Germany's bargaining position is yet to soften. Some German politicians still believe what in the Greek Prime Minister Alexis Tsipras's own words is "a golden opportunity to make an example out of Greece".

The third, and perhaps more optimistic, scenario would see Germany and Paris re-imagining the entire European project and using the Greek crisis as an opportunity to move the continent towards a different and sustainable trajectory. What would a new European architecture look like? Europe's lagging political structure is unlikely to ever catch up with the eurozone's current level of financial and commercial integration. A more sustainable path would be to decentralise the European project away from Brussels towards a more cooperative federal structure more in harmony with the principle of shared sovereignty that underpins the Union. In practice, this would involve abandoning the elusive quest for a centralised and uniform European super-state governed hierarchically from the core and embracing a democratic model where different nation states govern their local polities and economies in more flexible, creative and accountable ways.

The Greek crisis has the potential to unravel Europe's unique conception of continental governance. But it could also be a tipping point where Berlin and Paris confront hard choices and envision a new architecture for the EU, one where the financial and political balance between the European core and the periphery is reset to salvage the eurozone and preserve an adapted Union itself. On Monday, French President Hollande exhorted that "Europe is not simply an economic, monetary, financial construction" but "a conception of the world." Merkel also spoke about "solidarity" and "democracy" as Europe confronts its crisis.

These brave words will be tested in the coming days.