Access to timely and good quality Take Home Rations by a pregnant woman from a Particularly Vulnerable Tribal Groups community, could be a matter of life and death for her newborn. The last mile connectivity of nutrition for these communities is a complex approach that requires a matrix of solutions. 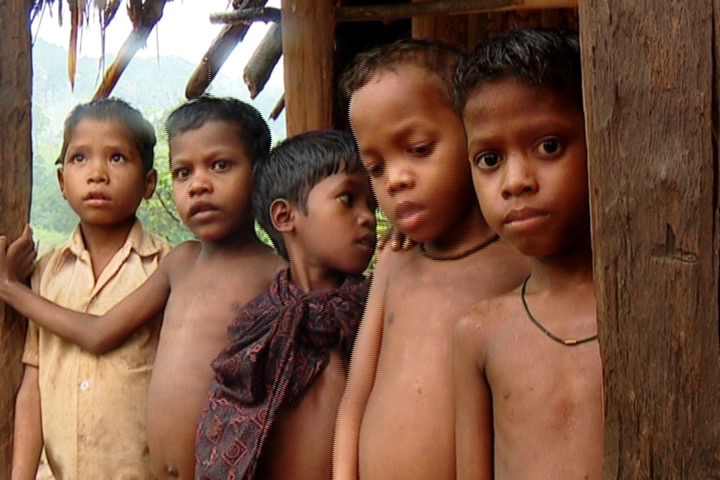 The Integrated Child Development Services (ICDS) scheme is touted to be one of a kind programme, providing mother and child nutrition and care programmes across India. The scheme boasts of 1.4 million Anganwadi centers across the country with a commitment to ensure the universal availability of services, making it one of the largest programmes in the world.

While there are many critiques of this 40-year-old programme, the fact is, given its vast network and institutional set up for providing important services, some addressing the critical 1,000 day window of opportunity, we cannot give up on this Government scheme. There are many stories of hope and change emerging from well-functioning Anganwadi Centres and zealous Anganwadi workers, but most importantly it is a symbol of the State’s commitment to its women and children, even in places of extreme deprivation. Unfortunately, despite the ICDS being a universal programme, the access to services under this scheme is not universal across the country and this is further evident in populations who are vulnerable and marginalized.

About three years back, Nagada village of Jajpur district in Odisha drew attention and found space in the state and national level media, for not the best reasons. Unfortunately, there were many child deaths in this village due to malnutrition. A fact-finding team revealed the tragic state of basic health and nutrition services to the Juang tribes who call Nagada village their home. The Juang tribes are one of the seventy-five Particularly Vulnerable Tribal Groups (PVTGs), in the country. The PVTGs are a sub category created within the Scheduled Tribes by the Dhebar Commission in (1960-61) to address the inequality in the rate of development within these groups. The Juangs of Nagada made headlines and the serious gap in their access to services leading to malnutrition was brought to the forefront. But unfortunately, the status of under-nutrition of many such vulnerable communities is not visible.

Scheduled Tribes (STs), in particular PVTGs, have one of the highest levels of income and wealth poverty, and a far higher dependence on public provisioning of essential services such as food supplements, WASH services, and healthcare facilities. Experience also suggests that most often STs are not aware of the entitlements under various programmes and hence fail to benefit from the same. A recent study by International Food Policy Research Institute (IFPRI), found that while overall utilization of ICDS programme has improved over the last decade, many marginalized groups such as historically disadvantaged castes and tribes, the poor, are left behind with lower utilization of services. The data from the latest round of National Family Health Survey (NFHS) comes as no surprise, where the under-nutrition among tribal people is much higher than for all groups taken together. In the tribal dominated states, on average the stunting levels are seven percentage points, and wasting levels are five percentage points higher, for STs as compared to all social groups. 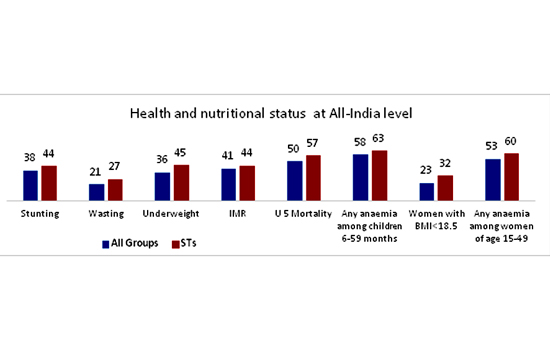 The estimates by NFHS 4, reveal, some alarming data on the state of nutrition amongst tribals, where almost every second child under five years of age suffers from chronic under-nutrition, and is under-weight, and one in every fourth child is wasted. 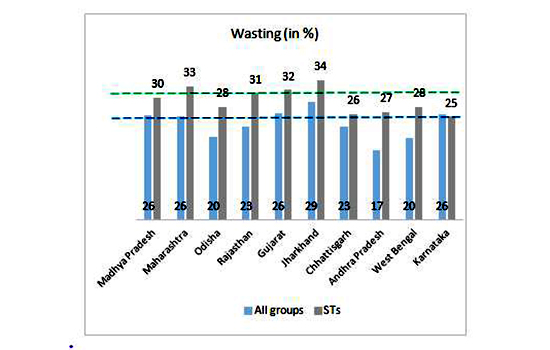 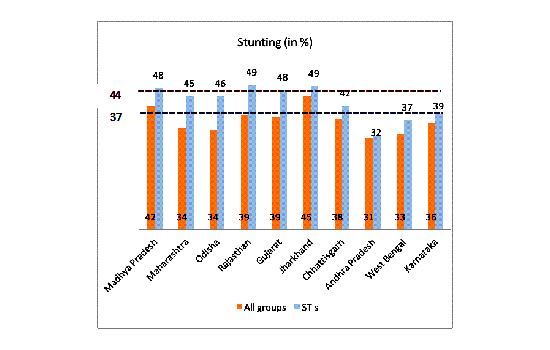 More than half the tribal children and women in the reproductive age groups are anemic, and almost 44 out of every 1,000 children born, die before they complete the first year of their life. These figures are not flattering for a country which epitomizes Mahatma Gandhi, who believed that policies should be made keeping the poorest in mind. Last year, the Expert Committee on Tribal Health released its report, which pointed to the shortfall in healthcare infrastructure and personnel in tribal dominated areas. This should have been a clear signal to policy makers that we are not considering the right solutions for addressing under-nutrition among the most marginalized communities.

Nutrition services play a vital role in the economic development and overall well-being of the STs, especially the PVTGs and other disadvantaged groups. Given the challenging socio-economic realities of these communities, access to these services is essential as their need is the greatest. If the data is to be believed, policy makers have an accountability to close the gap on under-nutrition amongst the most vulnerable and marginalized.

Access to timely and good quality Take Home Rations by a pregnant woman from a PVTG community, could be a matter of life and death for her newborn. The last mile connectivity of nutrition for these communities is a complex approach that requires a matrix of solutions. While last mile connectivity needs several supply-side initiatives, it also needs to be reimagined as demand generated by communities for better information and services on nutrition, and accountability of government functionaries to the community.

This needs to be viewed as a symbiotic relationship rather than one that is antagonistic. Last mile cannot be a model, limited to supply side issues that requires capacity building of service providers alone, which might work in some contexts. Nutrition to the most in need does not require models but requires movements that build political will across party lines, and this can only be powered by the people themselves.

(Neha Saigal and Saumya Shrivastava work with IPE Global on the “Matrix of Change for Nutrition” programme. The views expressed are personal)